One vote short of acquittal on manslaughter, but favored conviction on some lesser charges 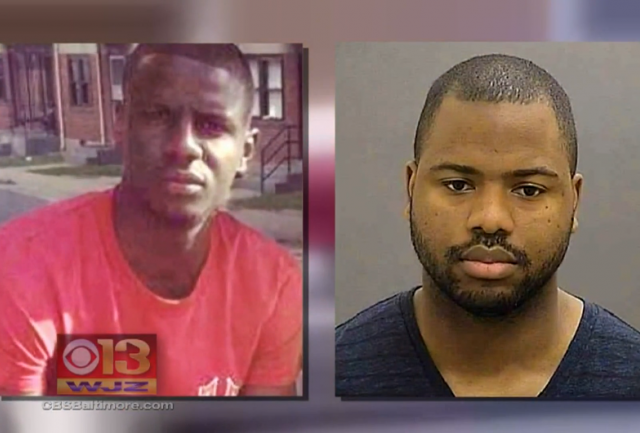 The Baltimore Sun is reporting that the jury in the recently hung jury of Officer William Porter was one vote shy of acquittal on the most serious charge of manslaughter when they were finally dismissed in a mistrial, with 11 of 12 jurors voting for acquittal.

This information purportedly is sourced from one of the jurors who requested anonymity in order to avoid being held accountable for violating Judge Barry Williams’ gag order.

Similarly, on the next most serious charge of assault the jury was 8 to 2 in favor of acquittal with two jurors still undecided at the point the case was declared a mistrial.

On the lesser charges, however, there was reportedly a majority in favor of conviction, at least at the point when deliberations were halted.

Interestingly, The Baltimore Sun reports that their juror source told them “a few more jurors wanted to convict Porter of manslaughter at the start of the deliberations but later changed their minds.”  One wonders if the same trend would have been observed with the other, lesser charges.

In related news, Maryland’s Court of Special Appeals (the state’s intermediate appellate court), which last week put ahold on trial Judge Barry Williams’ order that Officer William Porter could be compelled to testify, has now scheduled hearings on that issue for March 4.

Whether that means the trials of the remaining five officers to be tried (as well as Officer Porter’s retrial) will all be correspondingly delayed is uncertain, but prosecutors are clearly fully invested in obtaining Porter’s testimony for those trials.

Also, next Wednesday, January 20, Judge Barry Williams will reportedly hear argument from the defense counsel for Sergeant Alicia White asking him to strike down his prior order compelling Officer William Porter to testify against White in her trial.

The utility of that hearing given the Court of Special Appeals March 4 hearing on that very issue seems unclear.

We seem to be so far away from reality in all aspects of this case that it cannot be possible to forecast the way forward. It seems to go from one act of utter stupidity to another even more incredibly stupid decision. I have never seen anything like it. Not even the George Zimmerman case. I just hope that some bright clever sensible judge is going to strike down the whole charade – it would only take a few minutes to think about it.

I read that and started laughing. But then stopped, remembering I have family members that fit that description…

Of course, they ain’t in Baltimore.

Years ago, a federal prosecutor told me they always try to find out the jury breakdown in hung jury cases, and unless it is 10-2 or 11-1 to convict on the most serious charge, the case won’t be brought back to trial. If possible, they make a deal on any lesser charges, but it is a waste of time and money to hope a new jury will see a case completely differently than the first.

How generally that applies, I have no idea. But it seems to me these are political prosecutions brought solely to appease the mob and promote the prosecutor politically, without regard to justice.

These cases are show-trials to satisfy the angry masses of Baltimore. The usual guidelines don’t apply. Apparently neither does the Fifth Amendment’s fundamental prohibition against self-incrimination.

Keep in mind.
This is one juror talking. They can have their own ulterior motives for saying what they did.

For example, it “shows” that there can be a fair trial in Baltimore.
It can also show that there was one unreasonable person on the jury. Other’s were willing to “compromise” but not one juror qwho could not accept guilt of anything.

Until all the jurors speak out, no one will really know what the count was. Since one already has, I don’t think that it will be that long till all speak up.

Handy, I think you have it backwards. Only one was against acquittal, ie. only one thought he was guilty. Similar ratios for the lesser charges as well.

Read again. On the top charge it was strongly in favor of acquittal.
On the weakest charge:

“on misconduct in office the jury was 10 to 1 in favor of conviction (one left undecided).”

The way our system works the Jurors are the Triers of Fact.

In other words? Juries, not judges, make the big decisions regarding guilt and innocence. Are there lawyers who make their livings at this? You betcha! And, probably thereby hangs the differences in many outcomes.

Well? It’s just like finding a good doctor. Get the wrong one and you die on the table.

I’m a Lysander Spooner fan myself.

Can someone, perhaps even the esteemed Mr. Branca explain the legal basis for denying these Officers a change of venue?

Legal arguments aside, anyone but a certified imbecile realizes that a full acquittal may lead to riots in Baltimore. That puts unbelievable exogenous pressure on jurors who reside in Baltimore County, whose homes or livelihood may be in jeopardy by an acquittal. These external concerns seem to mandate a change of venue.

So legally speaking, why no change of venue?

You can’t determine if it was a fair trial by just looking at the jury vote. You need to take into consideration of the evidence also. In this case there was no evidence of wrongdoing that the persecutors could prove. It was a weaker case than that against George Zimmerman.

Question from a non-lawyer: Do prosecutors frequently bring a wide array of serious charges onto a defendant who they are trying to convict of a lesser charge in order to get the jury to think “Well, we didn’t convict him on murder or arson, but we need to justify the trial somehow, so we’ll go ahead and convict him on jaywalking just so he doesn’t slide on all the charges.” (This assumes the lesser jaywalking charge would have been difficult to prove, but the jury members can be ‘guilted’ into it this way)

I don’t think it requires a lawyer to know prosecutors often overcharge.

“…strike down his prior order compelling Officer William Porter to testify against White in her trial.” Is that your wording or is that the wording of the defense lawyer? Seems pretty prejudicial to me to assume Porter’s testimony would be against White rather than absolving her.

Juror’s statements about deliberations after a trial are generally not used in port-trial appeal arguments.

Can juror’s statements eg “some said they could not vote to acquit him on everything for fear of rioting in the city”, be used in motions in other trials? Say for a change of venue for the other five?

That sounds like something the defense should be asking the jurors in order to provide support for the request for a change of venue. Also, ask the jurors about the hold out for a guilty verdict on murder if he had a rational argument for guilt and it he voted guilty on every charge.

If for example, jurors told the lawyers that three jurors kept saying they were scared that acquitting on all counts would cause riots, would that be admissible ^1 in a motion?

1. I think usable is a more accurate word, but admissible conveys the context better.

“Juror’s statements about deliberations after a trial are generally not used in port-trial appeal arguments.”

That is absolutely false. How do you think jury misconduct is illuminated?

How is juror misconduct illuminated? Well it may be “illuminated” by juror statements, but those statements are generally not used in court.

The court generally can only use evidence extraneous to deliberations and juror statements for misconduct rulings.

A case, whose name I cannot remember, but sticks in mind as an example,
involved a baliff going through the jury room and finding a handwritten note which looked like a dictionary definition. The baliff gave the note to the judge. The judge determined that it was worthy of investigation. He talked to the jurors, discovered that a juror looked up the word at home and brought in the note. He then declared a mistrial.

My understanding that controling case law is Tanner vs. US:
http://caselaw.findlaw.com/us-supreme-court/483/107.html

based on Federal Rule 606b ( yes I know it’s a federal rule but local jurisdictions have similar rules ):
https://www.law.cornell.edu/rules/fre/rule_606

The appropriate quote from Tanner being: ‘the near-universal and firmly established common-law rule in the United States flatly prohibited the admission of juror testimony to impeach a jury verdict.’

No I am not a lawyer, but ten years ago I had a rather lengthy discussion with a group of lawyers and nonlawyers over what could be used by lawyers investigating juries.

I always find the topic funny and interesting. Like the time a juror walked into the jury room, announced that the defendant was obviously guilty. Then sat in a corner reading a book. The other jurors went on deliberating and finally convicted. Surprisingly the judge let the verdict stand.

I found an interesting site about the topic: http://jurorsbehavingbadly.blogspot.com/

So what is you case law justifying the general use of juror statements in motions post-trial?

Yeah yeah I know I’m stupid and you are not going to do the work of validating your facts and if I really want to know I should learn to read your mind.

Makes you wonder why Mosby doesn”t just offer full immunity to Porter. She is not likely to get him on anything other than misconduct. I still believe it is her goal to have Porter go thru the whole taking the 5th process to prejudice Goodsen”s . jury. The testimony he gave in his trial could easily be countered that he himself did not believe Freddie was in dire need of care at stop 4 and 5 ,, why should Goodsen.

New info out now is Mosby wants Porter to testify in all 5 trials. I believe it is just a way to get those trials delayed. She knows the charges against the arresting officers is real weak and convictions are more of a stretch . She will try IMO to get everything delayed at least till April Mayor elections for hubby.

It seems most of the jurors wanted a compromise conviction on a lesser, but there was one pure whole-hog holdout for social justice.