I am choosing my drinking word carefully! 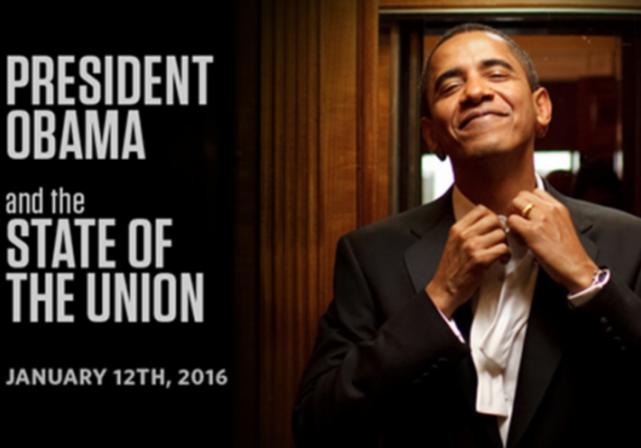 Gearing up for the State of the Union lecture he is preparing to treat us to this year, President Obama wanted to put a positive spin on the results of his many years in the Oval Office.

It is a chilling testament to his myriad of failures as Commander-in-Chief that one positive he reaches for, amid his many delusions, is that the Americans are not facing “existential threats”.

In an interview with NBC’s Today on the morning of his final State of the Union address, President Barack Obama told interviewer Matt Lauer that the United States didn’t face a single existential threat as his presidency approached its end.

“It is sometimes important for people to step back and measure how far we’ve come,” Obama argued. “The economy right now is better than any other economy in the world by a significant margin. We remain the strongest nation on earth by far and there are no existential threats facing us.”

I am not comforted. Recall that he asserted there was no threat the the homeland from Islamic terrorists shortly before the San Bernardino terror attack occurred.

The recent seizure of our Navy ships is an indication that his dreams of a peace deal with Iran are tuning into a nightmarish reality for the next administration to handle.

Obama’s signature achievement, Obamacare, is slowly collapsing under the weight of its complexities and costs. Just ahead of the State of the Union, Kentucky Governor Matt Bevin is going forward with plans to close down the state-run Obamacare insurance marketplace.

Two of tonight’s audience members are not fans of Obamacare, either:

Maguire and Veit have been invited by the House Speaker Paul Ryan, R-Wis., to represent the Little Sisters of the Poor, a Catholic religious order that has fought a long legal battle against the Affordable Care Act’s contraceptive mandate. In a class-action lawsuit, the Becket Fund for Religious Liberty has argued on behalf of the nuns that religious exemptions in the ACA are not enough, because simply signing the coverage over to a third-party insurance provider makes them complicit in offering birth control. Maguire and Veit will sit in the Speaker’s Box during the speech

As far as I am concerned, the only positive aspect about this evening is that this inanity will be Obama’s last State of the Union. I was more joyful at the prospect, until I read that his future plans aren’t confined to golf and comedy shows (via Tammy Bruce).

Israeli Prime Minister Benjamin Netanyahu reportedly is planning payback for President Obama’s dismissing Mr. Netanyahu’s objections to the Iran nuclear deal last year. Mr. Netanyahu is said to be rallying moderate Arabs to thwart Mr. Obama’s bid to become the Secretary-General of the United Nations after he leaves the White House next year.

…Mr. Netanyahu recently is said to have gotten wind of Obama’s plans which he calls the Obama Project. “Wasn’t eight years of having Obama in office enough?”

In conclusion, my drink will be Lagavulin and my drinking word “existential”. I look forward to live-blogging with the Legal Insurrection team tonight. Likely they will be substantially more sober than I at the end of the lecture.

Obama ~wanting~ to be Secretary General of the United Nations? That I can seee.

Obama ~taking steps~ to be Secretary General of the United Nations? I don’t think so.

This is a little too much “House of Cards” wishful thinking on the part of some yahoo out in Kuwait, with an unnamed source from the Israelis.

Now, while I believe that the Israelis are most likely of our allies to know information that has not been made public, I don’t believe for a second that they would leak it to a Kuwaiti newspaper.

The “great game” continues, regardless of everyone’s protestations and faux-outrage when somebody gets caught with their hand in the cookie jar.

Do not assume this is Obama’s final SOTU address. His ego will dictate he give the 2017 SOTU before the next president takes office, especially if it’s a Republican.

…President Obama wanted to put a positive spin on the results of his many years in the Oval Office.

Wouldn’t that involve telling a bunch of lies?

Except guns. Did he forget about guns?

He and progressives that fawn over him seem to say, each day, that Republicans are a existential threat.

Considering their cowardice, corruption and capitulation to this lunatic, and their attempts to sabotage those who seek to protect our nation – the GOPe certainly is an existential threat.

I’m going to see if I can get the ER to hook me up with an ETOH IV so I can choose “I” as the drinking word.

Having passed out, you’ll miss the final 90% or so.

… a true blessing from the booze!

That’s the beauty of having it as an IV… even after passing out, the drip is still going.

(I suppose I should clarify what I mean by “the drip”… I mean the IV fluid, but I suppose it could refer to the president as well)

Obama is vastly underselling himself. Consider these additional Obama accomplishments [and the number of other US presidents that have had the same accomplishment]

You forgot: there has been no Martian invasion.

A United States citizen cannot serve as Secretary-General of the UN.

“While the appointment and approval process of the Secretary-General is outlined in the UN Charter, specific guidelines have emerged regarding the term limits and selection process. These include a limit to two five-year terms, regional (continental) rotation of the appointee’s national origin, and THE APPOINTEE MAY NOT BE A CITIZEN OF ANY OF THE SECURITY COUNCIL’S FIVE PERMANENT MEMBERS.”
[All caps added for your reading pleasure.]
https://en.wikipedia.org/wiki/Secretary-General_of_the_United_Nations

Therefore, Obama could attain that position by only two methods:

1. Persuade the UN to change the rule that bars the appointment of citizens of the Security Council’s permanent members. I don’t believe that Obama is as popular around the world as he thinks, and the likelihood of this change being made just for him is doubtful. On the other hand, while Russia and China would have opposed any American for the position in years past, the quality of our presidents has changed substantially and they might now think that a weak, ineffectual poseur who is easily manipulated and even more easily ignored would be good for their purposes. The idea that Americans are strong defenders of liberty and natural opponents of Russia, China, and other totalitarian nations is so out of date now.

2. Admit that he is not an American citizen after all and therefore is not barred from the position. Everyone not American will get a jolly good laugh at the joke he has played on us for all these years and, in a fit of merriment, they will sweep him into the Secretary-General’s chair.

On second thought, he just might pull it off. If Soros wants it, it will be done.