“No Link” between Cologne Sex Attacks and Refugees 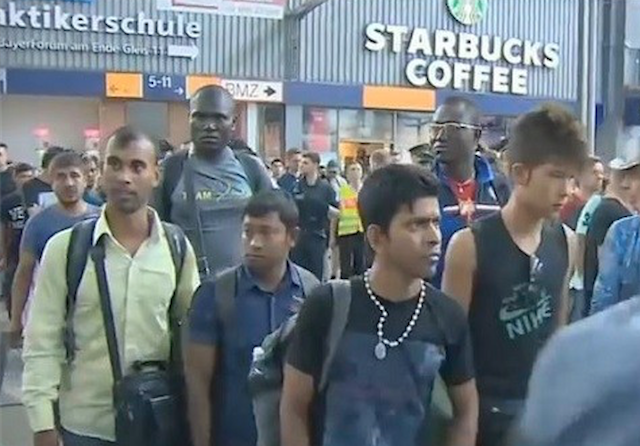 Following reports of increasing sexual violence and general law breaking throughout Europe, including particularly in Germany, EU leaders double-down on their delusional thinking.  Apparently, they are insisting that the increased crime and sexual assaults are not linked to the Middle Eastern refugee influx.

The sex attacks that took place in Cologne on New Year’s Eve were simply a “matter of public order” and had nothing to do with the refugee crisis, Jean-Claude Juncker’s inner circle believe.

The European Commission will be the “voice of reason” and tell the public that there is no link between the migration crisis affecting the continent and attacks on women in Germany, internal minutes disclose, amid growing concerns at a “xenophobic” backlash.

Apparently, public safety is not high on their list of priorities; instead, they are focused on trying to manage and manipulate the public’s perceptions.  Indeed, according to The Daily Mail, the EU  leaders want to “unconditionally reject” the link between the Cologne sexual assaults and the migrant crisis.

The minutes of the European Commission’s weekly cabinet meeting from January 13 hint at officials’ fears that the events in Cologne could turn public opinion sharply against the million migrants who have entered Europe.

They spell out Mr Juncker’s frustration at the inaction of national governments under pressure from voters, and a suggest sense of panic that the inability to halt a growing volume of economic migrants could undermine the “credibility” of the European project.

The public, apparently, should not believe their lying eyes and should instead believe the EU Commission’s insistence that what is happening is not happening.

Add to this their admission that the majority of refugees are not even seeking political asylum (as was originally put forward as the humanitarian crisis that Europe must correct by accepting millions of refugees) but are fleeing for (supposedly) economic reasons, and the EU Commission’s statement seems still more disconnected from reality.

The minutes document a presentation from Frans Timmermans, the first vice president of the European Commission and Mr Juncker’s trusted deputy.

“He also observed that the flow of migrants at EU borders was not slowing down and estimates suggested that only about 40 per cent of them, mostly Syrians, were fleeing war and therefore in need of international protection; meanwhile more and more third country nationals were slipping in who were driven by mainly economic reasons and did not qualify for such protection.”

During the discussion that followed, Mr Juncker’s team stressed “the importance of the Commission’s continuing to play its coordinating role and sounding the voice of reason to defuse tensions and counter populist rhetoric.”

They called for “the unconditional rejection of false associations between certain criminal acts, such as the attacks on women in Cologne on New Year’s Eve, and the mass influx of refugees.”

At the same time, they agreed that they must “respond to the concerns of European citizens, particularly by stressing that Europe was also a union of security and values.”

The violent sexual assaults and increased crime have nothing to do with the massive influx of refugees, but . . . hey, let’s teach them about our values just for fun?

Bizarre double-speak even from this group.  The EU, like Angela Merkel (and Loretta Lynch, for that matter), is more concerned about the possible negative reactions of their own people than about rampant crime sprees by refugees that spark realistic and natural concerns.

Well, it is real. And it’s the beginning of civil war in Europe.

Well, they made their bed, now they can have a good night’s sleep.

Oh Mohammed won’t you buy me a Mercedes Benz

My friends all have Porches I must make amends.

Hmmmm, I wonder if the Holocaust was just “matter of public order.” Who are these people making these kind of stupid comments?

The same ones who approved taking refugees. Odd, isn’t it?

This reminds me of the ebola outbreak.

The EU governments have a genuine problem on their hands, and the ordinary citizens know it. Instead of acting rationally, the governments are resorting to name calling against their own law-abiding citizens.

The same remedy applies: uproar. If properly applied, the bureaucrats can be made to move their lazy, far-too-well-protected a$$es.

Gee, where else is the “leader” so adept at disparaging his people ???

The next step will be for the EU to criminalize any discussion of the matter. A similar thing happened in Sweden. The politicians know they have screwed that country six ways from Sunday. So, is the solution to undo the damage that is entirely the fault of the political class? No, not ever. It is make it illegal for anyone to discuss it. A conservative (in a Swedish context) politician was charged with hate speech for observing that Muslim immigrants and second generation Muslims were responsible for nearly all the gang rapes in Stockholm. He went to court with plenty of evidence to back it up, but the judge cut him off. The truth is no defense when your are charged with inciting religious and or ethnic hatred in Sweden.

It isn’t as if the Swedish government’s suicidal immigration and refugee policies have lacked any popular support. Some Swedes take a weird pride in it, and consider themselves a humanitarian/moral “supepower.” It’s hard to see how an empire of lies is in any way moral.

Now it’s cute that the Euros are handing out cartoon books informing the “immigrants” that it’s impolite to rape women, stone transgender people at the train station, or do certain things in the swimming pool such as grope girls and crap in it. As if, nobody ever told them that and now that they’re informed they’ll say, “Oh, I didn’t know. Thanks for telling me.”

Recall the 2002 siege of the Church of the Nativity in Bethlehem. A bunch of Fatah’s Al Aqsa Marty’s Brigade terrorists holed up in that church for 30 or so days. While the two sides negotiated, the terrorsts lived like pigs inside the church. They hogged all the food. Muslims aren’t supposed to drink but they guzzled all the whiskey, cognac, wine, and everything else they could find. And, they tore pages from the Bible to use as toilet paper.

Now, how many people around the world die if some obscure pastor in south Florida even threatens to toss a Quran on a BBQ grill? Does anyone really imagine Muslims don’t know it’s wrong to defile a holy book? And perhaps if someone given those terrorists a coloring book, or perhaps put on a puppet show or voxplained it to them via the medium of interpretive dance they wouldn’t have ripped pages from the Bible to use as toilet paper?

Just like these Muslim invaders in Europe, the terrorists who invaded that church did what they did because they meant to insult and degrade their involuntary hosts.

The peons in Europe have figured this out, not matter how hard their pols insist on denying the obvious. And they will respond no matter how far the pols go to criminalize recognizing, discussing, and reacting to the obvious.

I certainly hope EUrophiles like Mr Juncker get exactly what they are asking for. I really don’t want to see Europe go down the drain without a fight.

The only upside is that now the Europeans get to live with what the Israelis have been putting up with since its inception.

I can no longer give these fools the benefit of the doubt. It is impossible to really believe what they say. They aren’t delusional, they’re evil. They’re knowingly and willingly letting the beasts through the gates and handing their countries over to them.