Will Jim Webb Run as an Independent?

Will Jim Webb Run as an Independent?

He seems to be setting the stage with recent attacks against Hillary, Obama, and “the left” 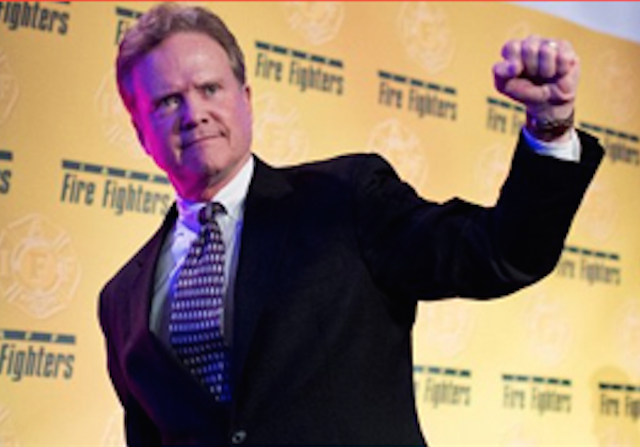 Jim Webb dropped out of the 2016 Democrat primary in October due to low polling, low fundraising, and low voter enthusiasm, but as Amy noted at the time, his team was even then making noises about an independent run.

Those noises have become much more noticeable as Webb has launched direct attacks on Hillary regarding her tenure as Secretary of State and her specific mishandling of Libya (not, however, anything about #Benghazi) and the “Arab Spring” debacle.

Writing on Facebook, Webb railed against Hillary’s “inept” mismanagement and “nonsensical” comments; he even takes a shot at the lapdog media for not holding her to account.

Our next commander in chief must define a strategic vision for the country and accept accountability for past actions. Hillary Clinton should be called to account for her inept leadership that brought about the chaos in Libya, and the power vacuums that resulted in the rest of the region.

She’ll need better answers than the recent nonsensical comment that she advocated taking out Muammar Qadaffi in Libya in order to avert a situation like Syria. The predictable chaos in Libya was bad enough, but it also helped bring about the disaster in Syria. Who is taking her to task for this? http://read.bi/1SbMG7h

. . . . Clinton talked at this last DNC debate about her failure as Secretary of State as if she was successful. While she held that office, the U.S. spent about $2 billion backing the Libyan uprising against Qadaffi. The uprising, which was part of the Arab Spring, led directly to Qaddafi being removed from power and killed by rebel forces in 2011.

Now some 2,000 ISIS terrorists have established a foothold in Libya. Sophisticated weapons from Qaddafi’s arsenal—including up to 15,000 man-portable, surface-to-air missiles have apparently fallen into the hands of radical Islamists throughout the region. For a Secretary of State (and a Presidential administration) this is foreign policy leadership at its worst.

The first rule of wing-walking (and regime change) is never let go of what you have until you have a firm grasp on where you are going.

And it’s not just Hillary that Webb is going after.  In a Christmas Eve post on Facebook, he made some (rather insightful) comments about Obama’s failed domestic policy and the decimation of the middle classes that it has wrought.

Obama’s comments in Monday’s NPR interview show how out of touch this administration and the Democratic Party have become with working men and women. His comments degrading the working class by asserting that they cannot adjust to change, and calling factory work a “bargain”, are examples of the left’s doing all it can to isolate that demographic group as idiosyncratic. They are publicly humiliating respected ways of life in order to avoid accountability for not having protected this vital component of America’s future growth.

Is this the bargain Obama speaks of: http://wapo.st/1SbQbL3?

Obama told NPR, “…wages and incomes have been flat-lining for some time, and that particularly blue-collar men have had a lot of trouble in this new economy, where they are no longer getting the same bargain that they got when they were going to a factory and able to support their families on a single paycheck…”  (emphasis mine)

Obama can’t seem to contain his contempt for American working families; these are, after all, the same people to whom he snidely referred during his 2008 campaign as being too provincial and slack-jawed to do more than cling to their guns and religion.  Tying this sneering view of the backbone of America to the left and to the Democrat Party, whom Webb has asserted is nothing more than “an arm for the Clinton campaign,” is a clear shot at the current Democrat front-runner.

Needless to say, these attacks on Clinton, her former boss, the Democrat Party, and the left she’s been bending over backwards to court have caused many to wonder if Webb isn’t setting the stage for an Independent run in 2016.

While observers typically have analyzed the prospect of a third-party or independent run by Republican front-runner Donald Trump—or even one from Sanders—Webb could still alter the dynamics of the race even with his smaller profile.

A recent CNN poll, for instance, forecast tight races between Clinton and several Republican contenders in hypothetical match-ups for the general election. Webb’s campaign has told Bloomberg Politics it would concentrate on mobilizing voters in the ideological middle, along with people who have become dissatisfied with politics.

In a tight race, even a small base of support could make him a factor. Ralph Nader, for instance, famously won only small percentages of the vote in many states in the 2000 presidential election, yet that arguably helped tip the Electoral College vote to then-Texas Governor George W. Bush, denying Democratic Vice President Al Gore, the winner of the popular vote, the presidency.

This is an interesting development, and not necessarily a good one for conservatives.  Webb has the gravitas afforded him by an impressive resume that includes having been a combat Marine, a United States Senator, and Secretary of the Navy, and he’s publically criticized the Democrat party for having moved “too far to the left.”

He’s one of those now nearly extinct “blue dog” Democrats who openly dismisses many of the progressive left’s favorite ideological bailiwicks, including the absurdity of “white privilege” and the anthropomorphic global warming hoax and has a strong record on the Second Amendment.  He’s also, however, a staunch supporter of gay “marriage,” voted for ObamaCare, supports government policies regarding foreclosures and lending that led to the real estate collapse, supported the Dream Act, the Cash for Clunkers program, and a host of other dubious progressive policies.

In short, he’s all over the map politically.

With a history that drives the Kos Kids nuts, he’ll never win over Bernie Sanders’ voters, and with Hillary moving further left almost by the day, it’s unlikely her supporters will move over to Webb (particularly those supporting Hillary simply because she’s a woman, of course).  He may peel away a handful here and there, particularly with terrorism being a top priority for both Democrat and Republican primary voters, but that mushy middle, those white, working class men and women, those Reagan Democrats . . . those are going to be the real demographic battleground in 2016.  Both the Cruz and Hillary campaigns, for example, have signaled that these are the very voters they hope to win over in the general should they win their parties’ respective nominations.

That said, I don’t think that Webb will have the impact of a Ross Perot in terms of sheer numbers unless he can substantially increase his name recognition and get media coverage (unlikely with the media coalescing around Hillary), but even if he rallies only the level of support of a Ralph Nader, that will matter in 2016.  Like Perot, Webb will appeal to a far broader range of voters, not just the fringes as Nader typically did.

He won’t even make it on the ballet in most states.

This is the equivalent of Huckabee considering an independent run. Nobody cares.

Getting on the ballet is tough; I don’t believe Webb’s toes could take it. 😉

If a deadline to get on the ballot has passed, there is the write-in option.

Personally, I would prefer to vote for Webb in the primary election instead of the clown line-up currently offered by the Democratic Party. Right now my ballot selection will be “none of the above”.

if he does… it will damage both Hillary and Bernie…
…and make a republican win in 2016 even more likely. Bwahahahahahahahaha…

you remember when Al gore was running against Bush…
…Al Gore lost about 4-5% of the vote under the same occurance.

it was more than enough to put Bush in power.

He’s probably just fishing for some Hillary “go away” $$. And she’ll probably oblige.

It’s pretty hard to see why he’s a Democrat. His positions aren’t enough to pull me away from my top 3 choices of Republicans though. He sounds a lot like my grandpa’s Democratic party.

idk, but Democrats don’t like Hillary really, and it’s good to have a (mostly) liberal Democrat with some military experience trashing Hillary from their side of the aisle.

Maybe Webb thinks he could draw the RINO vote since they are such haters of Trump, and even Cruz. Add to that the Dems that would their nose voting for corrupt liar Hillary, and he could get some momentum.

He’d need a couple billionaires and their PACs, but maybe he has a couple whispering to him, which brought him out of the shadows. He’d be much better than Hillary imo.