Watch the Staggering Statistics on the Fallen of World War II

Watch the Staggering Statistics on the Fallen of World War II

“An animated data-drive documentary about war and peace.” 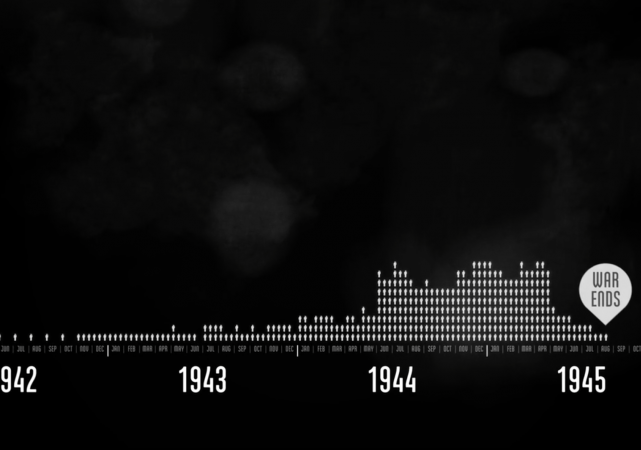 There are many ways to study war and conflict — causes, effect, social constructs, literature of the era, resistance movements… the list goes on.

This particular project by Neil Halloran is, “an animated data-driven documentary about war and peace, The Fallen of World War II looks at the human cost of the second World War and sizes up the numbers to other wars in history, including trends in recent conflicts.”

The result is staggering:

The Fallen of World War II from Neil Halloran on Vimeo.

Historical data is essential to keeping current conflicts in the right perspective. And that’s exactly what this mini documentary illustrates.

I was surprised at the magnitude of the Soviet losses. Very well done visualization.

Losses like those also make the decision to use the bomb at Hiroshima easier to understand.

What will the numbers look like when the Muslims try to consolidate their power and put an end to all things un-Islamic in Europe? How many Islamo-Fascists will die rather than be expelled en masse, for being the hostile hijra invasion force that they are? “Inviting” Muslims in will cost 10’s of millions of lives in the near future.

What’s the estimate on Russians deliberately starved to death during the Communists fight against peasant farmers when they were collectivizing farms – 25 Million, yes? China killed an estimated 75 million of its own citizens the same way.

Marxism, Communism and Socialism at peace are magnitudes more deadly than any other group at war. And the number of innocent bystanders — women, children, the elderly — they take out is pretty outstanding as well.

See the youth wearing the “cool” Chairman Mao t-shirt to the latest anti-war protest and weep at what our public education system hath wrought.

It’s interesting how the “viral” nature of things works. He released this for Memorial Day back in May, and though it got a lot of plays back then, he notes on Twitter that he’s “baffled and bedazzled” by the way views have just started surging again 7 months later (and includes an infographic of view numbers).

It makes me think about that post in Professor Jacobson’s “10 Most Viewed from 2015” posts which “actually was from 2014, but for some reason caught on abroad this year”. The study of this sort of phenomenon would be fascinating.

It is interesting for Stalin to say the Soviet Union provided the blood. If Soviet Russia had any capability to manufacture any type of war machine, they could have easily overwhelmed the Germans when they came. Stalin, however, was such a poor leader and such a paranoid psychopath, he killed just about all of his generals and admirals and sent his soldiers into battle after battle with virtually nothing to fight with. Only 1 in 3 Russian soldiers at Stalingrad even had a rifle.
I would say that every drop of Soviet blood spilt during WWII will ultimately be on Stalin’s soul. His utter contempt for the lives of anyone who wasn’t him has to mark him as the most evil of all people who’ve ever existed.

He also had Soviet Russians feeding and tending Nazi troops in their war with Poland.

People forget, if they ever knew, what a monumental monster Stalin was. It’s history’s lesson that that is what you get from the “science” of Collectivism.

It was interesting with a lot of incredible information but it bothered me. It seemed to present the facts dispassionately, but there was still some editorializing. Who were the “bad guys?”

It was implied that the Nazis were “bad guys” because they invaded countries and operated the concentration/death camps. Stalin was a “bad guy” because he wouldn’t let civilians flee battle site cities. But then the British were just as bad because they indiscriminantly bombed civilian targets, and the US was also equally bad because it bombed “non-military” targets (carpet and nuclear) and lied, claiming they were military targets. Pretty much that’s the sum of the bad guys of World War II, according to that video.

On a number crunching note, it did not compare the lives lost as a percentage of the population. What’s six million Jews when whatever gazillion million Soviets died? What’s a half million Romany compared? Close to three quarters of the European Jewish population was murdered, (which was about half the world population of Jews) and a quarter of the Romany population. I forget how many Soviets he said died, but Wikipedia had 27 million. The population of the USSR in 1941 was close to 200 million. So roughly 14% of the Soviet population was killed in WW II. It’s bad, very bad, but not as devastating as the slaughter of the Romany, and not nearly as devastating as the murders of the Jews.

Here’s a plug for “The Black Book of Communism”.

Reading the introduction is sufficient.

I’m wondering why fallen.io doesn’t have a video about the results of communism.