Happy New Year from the TSA! 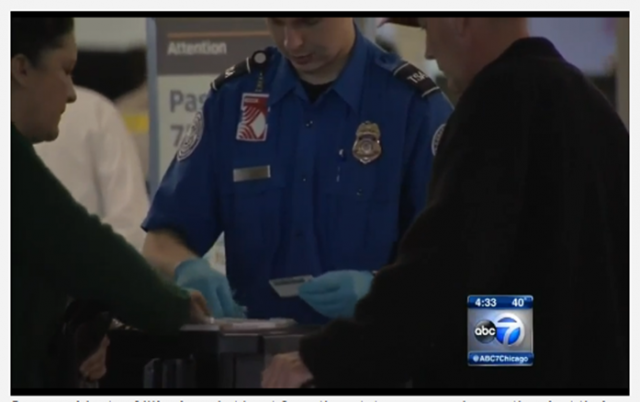 As Americans begin counting down to the beginning of 2016, the Transportation Security Agency is beginning its own countdown for its enforcement of Real ID Act Rules.

Starting January 10, Alaska, California, Illinois, Minnesota, Missouri, New Jersey, New Mexico, South Carolina, and Washington would be out of compliance with requirements for state-issued driver’s licenses used as identification at airports. Despite the deep concerns about privacy and fears over potential misuse of the national database that is to be created from information collected during the license compliance process, the TSA is now going to strong-arm states to comply.

…The federal government cannot force states to adopt these identification standards, but it can gain compliance in other ways. In October, it began requiring that visitors to military bases, nuclear plants and federal facilities produce a driver’s license from a state that complies with the law, or show another form of government ID, like a passport.

But the biggest leverage the government has over the states is commercial air travel.

The Department of Homeland Security said it would provide a schedule by the end of this year for when airport screeners would start accepting only driver’s licenses that complied with federal standards.

Previously, Alaska, California, Illinois, Missouri, New Jersey, New Mexico, South Carolina, and Washington (as well as Puerto Rico, Guam, and the US Virgin Islands) had been granted exemptions to the Real ID requirements, but they expire in less than two weeks. The DHS has already refused to renew exemptions for Missouri, Illinois, Minnesota, and Washington and said it wouldn’t renew them for other states.

The only break most travelers will be getting is that the agency is giving 120 days’ notice before starting to enforce the law at airports. After mid-May, the agency will begin full implementation of Real ID Act rules.

That is, unless you are Californian! The Golden State is getting until October to comply with the enhanced ID rules.

The state’s Department of Motor Vehicles announced Wednesday that the federal agency would have until Oct. 10, 2016 to comply with the rules.

California was among several states whose exemption to the law was set to expire on Jan. 10.

“The Department recognizes your efforts in enhancing the security of your jurisdiction’s driver’s licenses and identification cards,” Homeland Security officials said in a letter dated Tuesday.

Given that the Golden State issued licenses for over 100,000 undocumented immigrants in 7 weeks this past year, we will need every minute until the new October deadline to prepare.

What happens once that compliance deadline is passed? Approved ID’s such as passports would be required.

“A lot of people cannot afford a passport. I mean, that would be a big cut out of their budget,” Fairfield resident Brenda Thompson said.

“It is kind of a pain,” said Michael Coughlin, of Merced. “It’s like what? I’ve got to have a passport to travel from here to Denver or from here to New York? I mean, c’mon. I’m not leaving the country.”

Happy New Year from the TSA!

This is just a stop-gap measure, until they get everyone’s subcutaneous RFID chips ready.

Be sure to book flights out of NEWARK – NOT

The Red Diaper Baby at DHS and the Watermelons at EPA simply want to put the proles back into gulags and ghettos. Soon, we will need approval from a local commissar and internal passports to travel anywhere outside our government established residential area.

Now, some REAL IDs to vote, with a side of flying pig, for sure.

In AZ our legislators gave us a choice. We can get the Fed’s ID or not. Personally I’ve got a passport. So they can suck it for now.

Previously, Alaska, California, Illinois, Missouri, New Jersey, New Mexico, South Carolina, and Washington (as well as Puerto Rico, Guam, and the US Virgin Islands) had been granted exemptions to the Real ID requirements, but they expire in less than two weeks.

Update: TSA Will Give 120 Days Before “Implementing REAL ID Enforcement at Airports”

If the states had any backbone, the response to the federal government for this would be the same as for “gun control” laws, or any other “people control” program:

Let them try to enforce it. The backlash from any attempt to do so will be damnable and far-reaching enough that the FAA/TSA would be forced to ease off.

The hacks at “Everytown for Gun Safety” have been pushing the administration to require Real ID for NICs checks. I wouldn’t be surprised to see this administration “make it so” sometime this year.

This what happens when government wants to control citizens instead of controlling the borders.

See, this is why we can’t have nice things…like an anti-terror program that makes sense.

The Collectivists running the government are too busy with this COUNTER-productive BS. And it’s all Kabuki as far as terrorism goes, but very real as far as stripping us of freedoms goes.

The TSA which can’t find weapons when tested are going to anger travelers over an ID. Citizens need to take back the power that the feds stole.

“It is kind of a pain,” said Michael Coughlin, of Merced. “It’s like what? I’ve got to have a passport to travel from here to Denver or from here to New York? I mean, c’mon. I’m not leaving the country.”

It’s not difficult to make the argument that we’re living in two Americas: the micro-dictatorships on the northeast and the west coasts, and the rest of free America. The cultural differences between Colorado and New York, for example, are vast enough that you may as well be flying to another country.

I’m sorry, but realistic ID standards are a must. We have somewhere between 10 and 20 million undocumented aliens running around the country. And, the People’s Republic of Kalifornia is busy issuing them driver’s licenses and state issued ID cards, without even obtaining verifiable items of identification. That is fine. If the people of Kalifornia wish to do that, that is their business. They have to be aware of the fact that their state issued ID is worthless elsewhere, however.

Verifiable ID is a must, in our society. It cuts down on fraud, especially in the areas of voting, and makes it easier to identify criminals. It allows states to be able to determine if a person is qualified to perform certain activities which require specialized training, such as driving and flying, practicing medicine or law, etc.. We require identification from our LEOs, before we recognize their authority. Why, then should we not require verifiable ID to use public transportation, which has been a terrorist target in the past?

The Real ID Act was a compromise. It was designed to provide verified identification, on a national level, while not requiring a National ID card and the resultant federal data base to support it. And, as the other 41 states have proven, it did not represent an onerous burden upon the issuing agencies of the states. And, this did not sneak up on the states. The Real ID Act was enacted in 2005, 10 years ago.

So how are Democrat states going to survive if all of their illegal voters can’t get driver’s licences?

Wow, they will try to push this crap on us but have freaking strokes when you mention requiring ID to vote, lol.

That would be funny if they’re not allowed to fly.