If you are a Republican, you don’t actually need to be crazy to be crazied by the media. 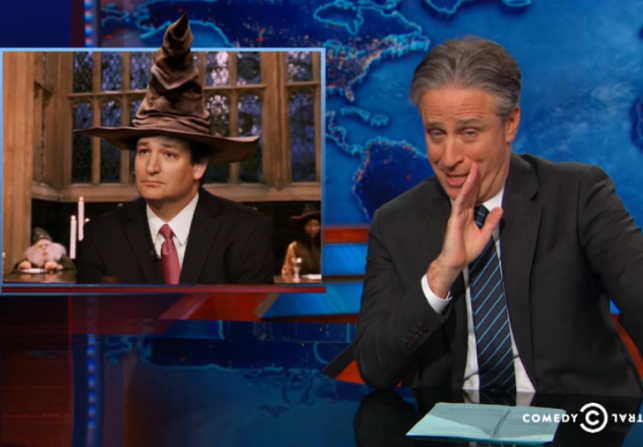 I noted the other night that Donald Trump may have opened the “Overton Window” for Ted Cruz, by making Cruz acceptable to both Republican establishment types and general election voters who otherwise would have considered him Cruz conservative.

I noted the fear of a liberal who wrote:

Donald Trump looks like the warm-up act. Whoever follows him from the Republican party looks reasonable (and sane) by comparison.

How will the mainstream media react if Cruz’s current poll surge holds and he looks like a viable challenger to Trump? We know the answer, because there’s a history here, one I documented back in August 2013. And ironically, it’s a theme Trump appears to be taking up in a recent attack on Cruz.

I called it the crazying of Ted Cruz, focusing on a Daily Beast article trying to portray Cruz as “creepy”:

A lifetime of achievement that would normally be heralded by liberals if achieved by a liberal Hispanic, devolves into creepiness on the slimmest of pretexts.

This is all part of the crazying of Ted Cruz by liberal publications like the Daily Beast. It doesn’t matter what the substance is, they just want to associate the word “creepy” with Ted Cruz in the minds of the public, many of whom don’t read past the headline.

Its a meme that persists to this day, pushed by Rollling Stone, HuffPo, NY Magazine and others: 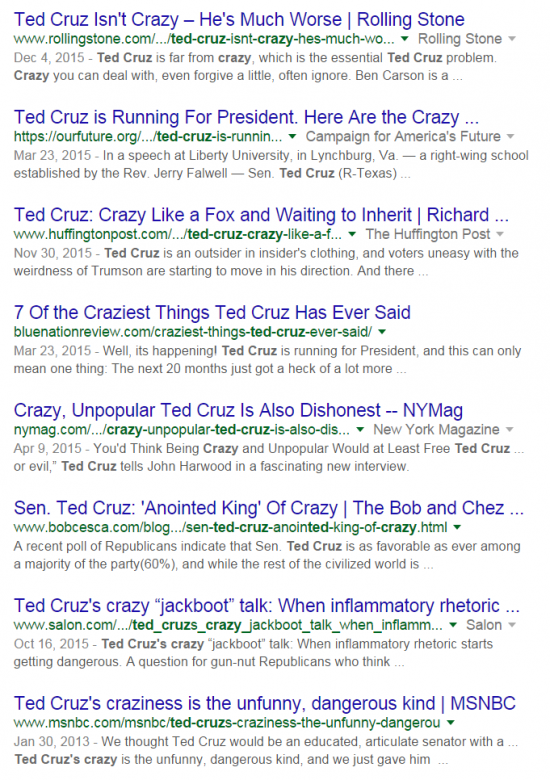 It’s the imagery and headlines that count, like this recent Salon.com column: 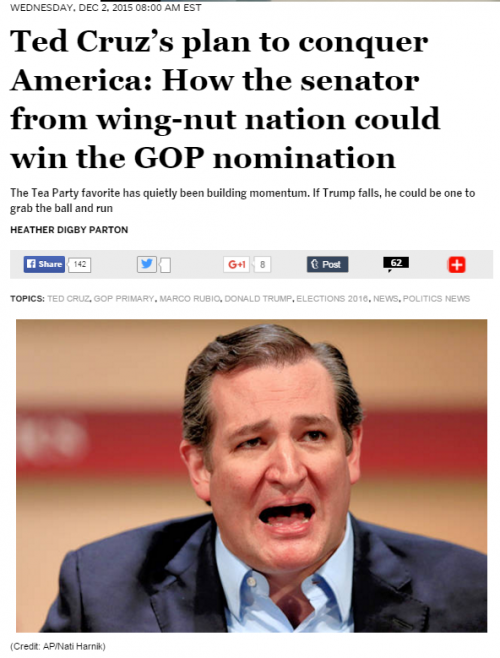 When Donald Trump called Cruz “a little bit of a maniac,” he was following this line of attack:

Cruz tried to respond in a light-hearted manner.

In honor of my friend @realDonaldTrump and good-hearted #Maniacs everywhere: https://t.co/KOPIi4XTVt

The media will portray any Republican nominee as crazy. With Jeb floundering, Marco Rubio is reputed to be the establishment Plan B. But Rubio too will be crazied.

I wrote in 2012 about how The “crazy-ing” of Marco Rubio begins:

So Rubio’s a target even more so than in the past couple of years. Every question in every interview is a potential land mine.  There can be no off-the-cuff remarks.

The motus operandi will be to “crazy” him, the long-standing tactic used against Republicans and particularly people like Rubio who sprang from the Tea Party movement (something he doesn’t wear on his sleeve very much) or who occupy that most reviled place in the mainstream media, religious Christians.

The Strategy of Crazy was used against the Tea Party in 2009-2010 and continues to this day….

Here are some recent “crazy” hits on Rubio: 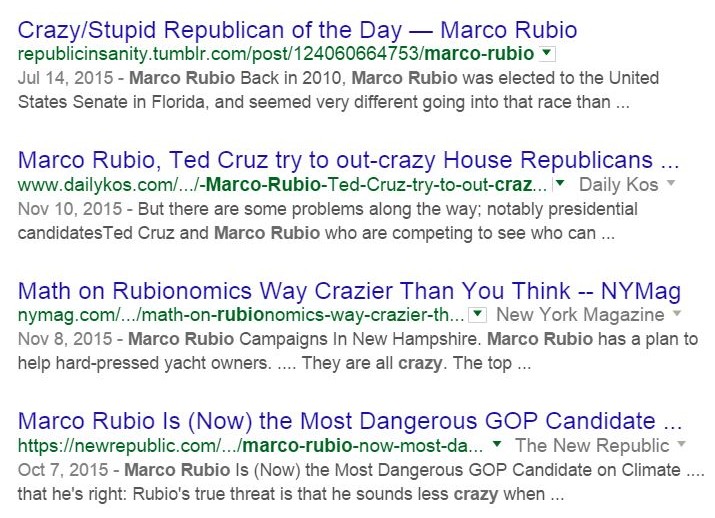 If you are a Republican, you don’t actually need to be crazy to be crazied.

Trump is using the crazy liberal media playbook against Cruz. It’s not one other Republicans should embrace.

Let’s not form a crazy circular firing squad. No Republican is safe.

The only plan the GOPe and RINO’s have is to get HILLARY elected. With Ryan and doofus in charge in the Congress, the pointONE percent will continue their gravy train ride, with H1B visa and uncountable illegals that they pay less than minimum wage and the good nanny state picks up the tab for their living expenses. Now I HOPE Cruz is true to his comments and HOPE that Trump is telling the truth. But I do KNOW that if ANY of the other GOPe types get in, Hillary will be it and we are sunk, big time.

Donald knows he can’t take out Cruz on a level playing field, and the Iowa polls confirmed it. So, he pulls a Donald. He’s testing the waters to see if this helps or hurts him.

Cruz is ready for the “crazy” catcalls. He doesn’t have to touch that in the primary. I can’t wait for “crazy is arming Al Qaeda terrorists in Libya and blaming a video when they kill our men.” Et cetera.

BTW, I absolutely loved it when he read “Green Eggs and Ham” on the Senate floor.

we need Cruz missiles against the donkeys and horses rear ends.

One slip and you’re done with him, right? Hope you aren’t like that with your spouse.

For your consideration: what if this is a false flag op? What if Cruz knew it was coming because Trump told him ahead of time?

The people that ran with this might be darn embarrassed if it turns out that he was just using it to make a larger point. He does have a reputation of baiting his adversaries in order to trap them.

Generally, there are three types of errors one can make:
1) Have a worldview that is wrong. This type can be corrected with education.
2) A slip is where one is trying to do something correctly and makes an error. This type can be fixed with error-proofing to catch the error so you can correct it. You see this when you deposit a check, for example.
3) A violation is where you know what is right but you choose to do something else. A violation needs to be punished so the benefit is less than the cost.

Trump’s error is of the violation type. It was deliberate and calculated. He is too smart to make a slip. He may miscalculate the benefit vs. the cost, but he knew what he was doing. I am disappointed in him. The country needs him to stay higher on the food chain.

Trump has already taken out Cruz. What are you talk8ng about? 41 to 14 and 38 to 15. Cruz isn’t close. The media are desperate to use some republican to try and take out Trump because tgey have been unable to do it themselves. Last month they tried with Carson in Iowa. This minth they are trying with Cruz in Iowa. Next month it will be someonecelse.

“Trump has already taken out Cruz.”

THAT would explain why T-rump is PANDERING (Levin’s word) to the ethanol lobby in Iowa.

They were. Then Trump got in the race and began drawing 95% of the coverage so it didn’t matter what the rest say. Media needs Trump to be the nominee to boost ratings and ensure Hillary can win.

Trump made a mistake with this line of attack. He’ll realize it soon enough. He won’t be able to play the same game with Cruz.

Indeed, the MSM will “crazy” all of them, depending on who is at the top of the polls.

And, of course, who wins the nomination.

The social justice warriors, partiers, rioters, looters and entertainers will use any mean necessary to get their way.

A “crazy” classification by those straight-jacketed with PC should be a badge of honor. Projecting their own shadows onto their cave walls, the PC restrained sees you as a threat to their “social justice” sanity. They have nothing of import in hand (and no absolutes) to challenge you with. With their hands tied they only can speak mocking words.

“Crazy” is saying all values are equal.

“Crazy” is saying “gun violence” in place of Islamic extremists.

“Crazy” is saying the Constitution is a “living document” and is to be interpreted by putting your finger in the wind.

“Crazy” is saying a video caused the Benghazi attacks.

“Crazy” is saying “What difference at this point does it make”.

“Crazy” is saying “We will know what’s in the bill after we pass the bill.”

I got the Plato reference. It fits the SJW crowd perfectly.

IIRC, every Republican presidential candidate since Eisenhower has been dumb as a post, except Nixon, because it was impossible to portray him that way, so he was evil instead. Often they’re crazy as well: Goldwater was crazy, Reagan was both dumb and crazy. So was Palin, though mostly dumb. Does anyone know whether Goldwater was dumb too, or was that impossible to pull off? Cruz is another one who’s obviously not dumb, so he has to be crazy.

It’s also remarkable how each dumb Republican becomes wise as soon as he’s safely dead or at least retired.

The light begins to dawn…

The lights are catching on all over the place. Trump 41% to Cruz at 14% in Monmouth poll and today Trump at 38% to Cruz at 15% in ABC Washington post poll.

Levin’s and Limbaugh’s analysies of Trumps comments on Scalia question and Cruz were both rather superficial and just plain wrong.

Tapper tried to set Trump up for continuing the he is a racist line of false attack by misstating the Scalia quote and its context. Trump gave the only answer he could. It was brilliant and later left Tapper and commenters unable to continue the he is a racist line of attack which was their intention all along. Trump clearly indicated his preference for conservative justices by also telling Tapper that his favorite justice was Clarence Thomas.

As for the Cruz maniac comment all that was was a very mild and inconsequential non attack / attack in retaliation for Cruz being dumb enough to think he could speak to reporters off the record and without secret recordind devices being involved. A bad error in Judgment on Cruz’s part. Not his first. Far worse is his support for TPP/Obamatrade.

“Trump gave the only answer he could. It was brilliant…”

As usual your post is infantile and cartoonish. It is truly amazing how you never tire of embarrassing yourself.

Nobody will ever accuse you of getting your posts from other sources. They are clearly all your own windbaggery.

“Levin’s and Limbaugh’s analysies of Trumps comments on Scalia question and Cruz were both rather superficial and just plain wrong.”

If you say so?

“Far worse is his support for TPP/Obamatrade.”

Were it only so. http://www.breitbart.com/big-government/2015/11/21/ted-cruz-vows-vote-tpp-trade-deal-iowa/

“I voted against TPA and I intend to vote against TPP.”

What you quote is what Cruz said AFTER he flip flopped on TPP/Obamatrade. He wrote WSJ artcle extolling virtues of TPA/TPP and that he would vote for them. He made a temporary flip flop for crass political reasons saying he would vote against TPP because it is too caught up in politics. In other words he can vote for it once the election is over.

Right. No politician who changes his position is to be trusted. Trump has never changed a position.

You miss the point. My criticism is not that he flip flopped but that based on what he said he didn’t flip flop. He has made it clear he supports TPP. Cruz has just said he won’t vote for it till election is over. So my criticism is not that Cruz flip flopped but that Cruz supports TPP. I’m opposed to TPP for all the reasons stated by people like Trump and Cruz supports TPP just wants to wait to vote for it till election is over.

I didn’t miss your point. You’re calling Ted a liar, that he switched just to fool folks into voting for him. I don’t agree. We’ll see.

Everybody says Cruz is crafty politician and the whole TPP thing smacks of pure political calculation and nothing else. I would be happy to be wrong. Don’t think I am however.