Listen to the audio 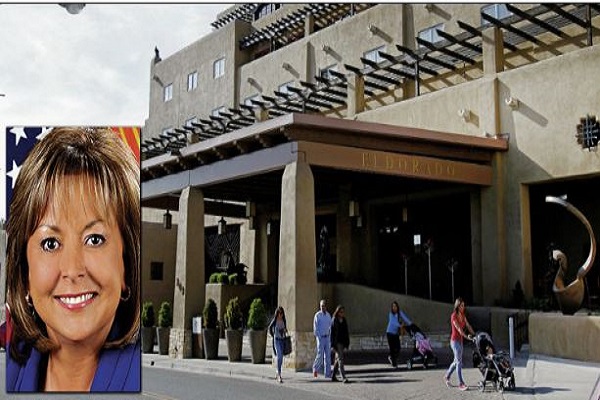 New Mexico governor Susana Martinez—once hailed as a possible VP pick for Marco Rubio, Chris Christie, and/or Jeb Bush—is at the center of a bit of controversy concerning a noise complaint at a hotel room at which she was attending a holiday staff party.

Santa Fe police were dispatched to Gov. Susana Martinez’s hotel room at the Eldorado Hotel & Spa about 1:30 a.m. Sunday after a caller complained of loud noises emanating from the room and someone throwing bottles off the balcony.

It seems that it was an hotel employee who placed the complaint call and that the governor became “at times impatient” with the dispatcher.

The governor said she and her disabled sister were in the room, along with six other people eating pizza. She said they were not making noise. If there was a disturbance in the room, she tells the dispatcher, it would have happened about six hours earlier, but does not provide further explanation in the recording.

Martinez tells the dispatcher who she is, and then asks who complained. The dispatcher tells her he can’t give her that information.

“Why can you not? It is public record,” Martinez responds. “Give it to me.” Her tone was occasionally impatient.

She insists on knowing who made the complaint and asks if it was another guest in the hotel.

“What room number?” she asks. “Are they next door?”

A dispatch log said a complaint was made about guests “partying” in a room on the fourth floor. “Caller adv they were warned to stop / They haven’t / Caller would like them escorted off the property,” the shorthand notes of the log say.

The person mentioned in the log as the caller was a hotel employee.

KRQE reports that Martinez told the dispatcher to “call off” the police and notes that the Santa Fe interim police chief was in attendance at the party:

The Santa Fe officers did not attempt to contact the hotel guest who made the complaint, nor did they go up to the governor’s fourth-floor room to investigate further. Ross said the officers made a sweep of the outside of the building to look for evidence of broken bottles, but found nothing.

Santa Fe’s interim police chief, Patrick Gallagher, was at the holiday party as an invited guest. Ross said the chief was not notified of the call until Monday morning.

Following is audio of telephone exchanges related to the incident:

If her name was Kennedy and she’d killed someone, she could change parties and have it made.

Well if it were Trump, he wouldn’t have been eating pizza.

Sounds more like a setup to me. Especially since they didn’t find any broken bottles.

It does bother me that she would try to get the name of the complainant. Having had some less then friendly neighbors in my life, I can tell you that the police generally do not give out that name.

Front desk DOES NOT make such calls. A manager or security does. Front desk would only call in an actual emergency.

As a well-known and experienced prosecuting attorney, she would know what she can and cannot get information-wise about complaints of this nature, especially knowing and stating that nothing’s going on……no police are needed.

Smells very much like a set-up, indeed – and also, from what it sounds like, there really should have no problem with this; it’s a matter for the hotel, not the police. Yeah. Stinks to high heave, IMHO.

So she was drunk. That’s the state Hillary Clinton was in for the 4 years she was Secretary of Inebriation (aka ‘State’).

Obama trashes the law and Constitution, Hillary uses her position to sell influence and solicit donations, and they both put national security at risk – but a Republican Governor has a loud holiday party in a hotel suite and it’s big news.

Sounds like the bottle-throwing was invented, police probably don’t respond to noise complaints in hotels; that’s a management problem. Only if the guests abused the manager trying to enforce the rules would they show up.

She sounds a bit inebriated, but not out of control. I didn’t think she was at all obnoxious. I agree it was likely a false or hyped complaint from a rabid ‘Rat.

Spring break parties got louder than that.

These people are starting to make Dennis Rodman look normal.

At least she didn’t say “do you know who I am?”

The last thing we need is another politician with an entitled attitude.