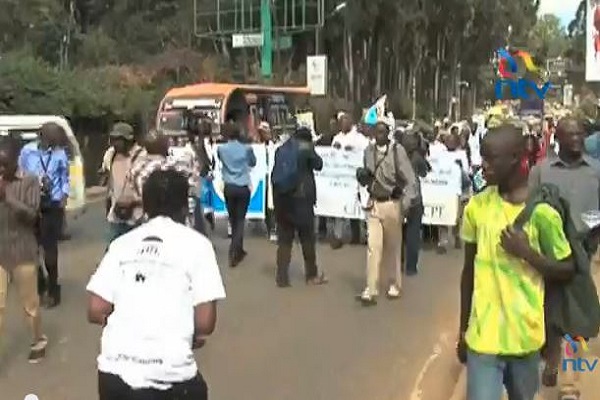 Back in July, Obama angered Kenyan leaders by ignoring their advice against pushing a “gay agenda.”  President Kenyatta told Obama that gay rights was a “non-issue.”

President Barack Obama nudged African nations Saturday to treat gays and lesbians equally under the law, a position that remains unpopular through much of the continent. Obama’s Kenyan counterpart responded by calling the matter a “non-issue” for his country.

Obama tackled the sensitive matter on his first full day in Kenya, the country of his father’s birth. He drew on his own background as an African-American, noting the slavery and segregation of the U.S. past and saying he is “painfully aware of the history when people are treated differently under the law.”

“That’s the path whereby freedoms begin to erode and bad things happen,” Obama added during a joint news conference with Kenyan President Uhuru Kenyatta. “When a government gets in the habit of treating people differently, those habits can spread.”

Kenyatta was unmoved, saying gay rights “is not really an issue on the foremost mind of Kenyans. And that is a fact.”

A number of Kenyan politicians and religious leaders had warned Obama in outspoken terms that any overtures on gay rights would not be welcomed in Kenya, where gay sex is punishable by up to 14 years in prison.

Obama had been targeting much of Africa for its anti-gay laws and culture for years before his July visit to Kenya that sparked protests.

Watch this report about “Obama’s Homecoming” to Kenya:

The New York Times is now questioning whether Obama’s tactics were a wise move after all.

Four years ago, the American government embarked on an ambitious campaign to expand civil rights for gay people overseas by marshaling its diplomats, directing its foreign aid and deploying President Obama to speak before hostile audiences.

Since 2012, the American government has put more than $700 million into supporting gay rights groups and causes globally. More than half of that money has focused on sub-Saharan Africa — just one indication of this continent’s importance to the new policy.

America’s money and public diplomacy have opened conversations and opportunities in societies where the subject was taboo just a few years ago. But they have also made gay men and lesbians more visible — and more vulnerable to harassment and violence, people on both sides of the gay rights issue contend. The American campaign has stirred misgivings among many African activists, who say they must rely on the West’s support despite often disagreeing with its strategies.

According to the NYT, Obama’s gay rights campaign led directly to the passage of last year’s strict anti-gay laws in Nigeria.

In Nigeria, Africa’s most populous nation, the final passage of the 2014 law against homosexuality — which made same-sex relationships punishable by 14 years in prison and made it a crime to organize or participate in any type of gay meeting — is widely regarded by both supporters and opponents of gay rights as a reaction to American pressure on Nigeria and other African nations to embrace gay rights.

“The Nigerian law was blowback,” said Chidi Odinkalu, chairman of Nigeria’s National Human Rights Commission and the senior legal officer for the Africa Program of the Open Society Justice Initiative, which supports gay rights on the continent. “You now have situations of gay men being molested on the streets or taunted. That was all avoidable.”

“I’ve said to U.S. diplomats privately as well — the risk is causing more harm than good,” Mr. Odinkalu added. “You don’t want an infusion of good will to actually do harm to the community that you think you’re protecting.”

. . . . In retrospect, Father Ehusani said that Nigeria’s law was too punitive and an “overkill.” Without the American pressure, he said, “the law would not have come in the form in which it did.”

African nations, according to the NYT, are accusing the U. S. of cultural imperialism. The NYT continues:

Fierce opposition has come from African governments and private organizations, which accuse the United States of cultural imperialism. Pressing gay rights on an unwilling continent, they say, is the latest attempt by Western nations to impose their values on Africa.

“In the same way that we don’t try to impose our culture on anyone, we also expect that people should respect our culture in return,” said Theresa Okafor, a Nigerian active in lobbying against gay rights.

. . . . Gay Africans are becoming increasingly caught in the American culture battles being waged in Africa, said the Rev. Kapya Kaoma, an Anglican priest from Zambia who is a researcher at the Massachusetts-based Political Research Associates.

“When two elephants fight, the grass will suffer,” said Mr. Kaoma, who has documented the ties between American evangelicals and the anti-gay movement in Africa. “This is what’s happening in Africa. African L.G.B.T. persons are just collateral damage to U.S. politics on both ends.”

“When two elephants fight, the grass will suffer,” said Mr. Kaoma, who has documented the ties between American evangelicals and the anti-gay movement in Africa. “This is what’s happening in Africa. African L.G.B.T. persons are just collateral damage to U.S. politics on both ends.”

I would think any sensible individual would balk at seeing $700 million (certainly those who voted for a Republican House and Senate that went on to authorize and pay for this) spent overseas on cultural programs of any kind. To say nothing of being for such a dubious purpose.

And lets keep in mind that, like almost ALL discretionary spending, this money is disbursed to left-wing NGOs. These groups that are basically fronts to ensure that America’s progressive culurati, who can find no productive employment in the real world, are able to earn six-figure/ high five-figure incomes.

We Conservatives like to chuckle about how useless degrees on [insert leftist priority] studies are. They’re a bit more rewarding than you think, once you learn how to play the game.

Wasn’t such cultural imperialism, “we know best” attitude one of the things he went around the world apologizing for 7 years ago?

Reading that article yestesray made my day.

There is a pattern of Obama policies having the opposite effect when actually implemented.

Transformation is NOT always POSITIVE.

British, French, and Northern-USAn opposition to slavery was also “cultural imperialism”, which they forced on the whole world at gunpoint.

But the poison of the Frankfurt School…so successful here in the past decade or two…HAS to be spread out over the globe. Cultural norms HAVE to be crushed and replaced with the moral vacuum that is the Collective.

It’s worse than that. The “=” movement is notably pro-choice. They need to explain on what basis they selectively exclude orientations and behaviors from normalization, and the consequences of forcing normalization of behaviors that are incongruous (e.g. irreconcilable) with the natural order and prevailing moral order.

It’s not merely a moral vacuum, but rather moral insanity. They should not be allowed to, once again, escape scrutiny through claims to their quasi-religious pro-choice doctrine pulled from a penumbra.

How much of that $700 million went for the construction of bathhouses?

The congruence, “=”, movement didn’t do well in the Democrat Party or democratic polls until a transgender/homosexual judge overrode the consensus. Then the pro-choice Party leader, Obama, raised the lackluster rainbow flag signaling a progressive era of selective or pro-choice exclusion.

It’s no wonder that Africans and more people daily are unimpressed by a quasi-religious cult that normalizes elective abortion, clinical cannibalism, and class diversity. The transgender/homosexual men and women were poorly advised to seek alliance and offer legitimacy to the pro-choice cult.

The “=” movement had an opportunity to end “slavery”. They could have demanded civil unions for everyone who wanted them. Instead, they pushed a congruence that established legal and institutional discrimination and exclusion of politically unfavored orientations and behaviors. Also, they were vindictive, and attacked not only the democratic consensus, but anyone perceived to have supported it, and others where it was opportunistic for political, social, and fiscal benefits.

This is why the Africans reject the unstable, liberal ideology pushed by Obama et al. Let liberals, especially progressive liberals, and “moderates” reconcile their unprincipled state before they spread their social experiment to societies with preexisting social and economic instabilities.