Angry and non-compliant upon arrest, Bland apparently hanged herself in jail 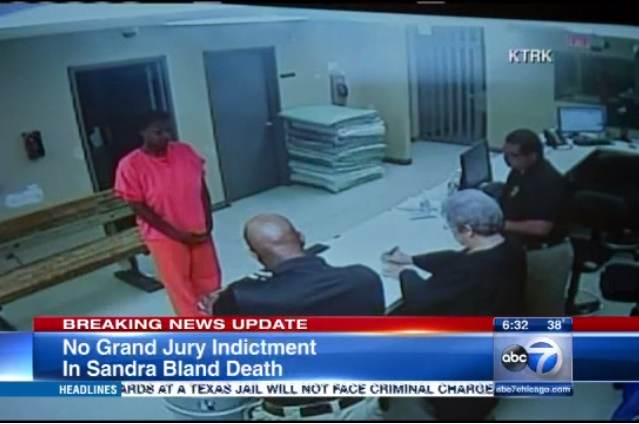 Various news agencies, including The New York Times, have reported today that there were no indictments issued by a Texas grand jury with respect to the in-custody death of Sand Bland.

By all appearances, Bland had hanged herself in her cell.

Bland was 28-years-old when she responded with anger and non-compliance after being lawfully pulled over in what should have been a routine traffic stop.  As a result she got herself arrested. As we wrote at the time in “Sandra Bland Arrest: Another Lesson in Non-Compliance,” Bland’s conduct was “a free lesson in how not to act during a traffic stop if you don’t want to get yourself arrested.”

Video of her conduct that triggered her arrest was captured on the patrol car’s dash camera:

The Grand Jury’s decision to not indict apparently extends only to the circumstances around her death and the conduct of the jail staff.

In particular, CNN reports that Darrell Jordan, a special prosecutor on the case, stated that the Grand Jury “has looked at all the evidence and found no evidence of murder,” apparently affirming the authority’s position all along that Bland’s death was solely at her own hands.

Somewhat remarkably, some activists continue to call for the prosecutorial targeting of the arresting officer, Texas State Trooper Brian Encinia, although on what grounds even The New York Times seems unable to articulate, stating only:

Many activists have called for charges against Brian Encinia, the Texas state trooper who arrested Ms. Bland after a routine traffic stop in Prairie View, northwest of Houston, turned contentious.

CNN’s report indicates that the Grand Jury will consider additional possible charges in January, but is also unable to articulate what those charges might be or against whom they may be brought (although Trooper Encinia would seem the only possible target).

The grand jury, however, will reconvene in January to consider whether to indict people on other charges in connection with the case, Darrell Jordan, a special prosecutor handling the case, said Monday night. Jordan also said the grand jury decided that no Waller County Jail employee would be charged. He declined to say what charges still could be considered and against whom.

I suppose the only possible charge they envision would be false arrest, but there seems little basis for such a charge given the dash cam video.

For those unfamiliar with the law in this area, here’s my analysis of the issue from last July:

First, there’s the stop.  As discussed at length in the context of the Freddie Gray arrest, as well as the McKinney pool arrest, an officer requires some reasonable suspicion of unlawful conduct in order to stop someone.

In the case of Bland, the “reasonable suspicion” is actually a certainty–she committed a moving violation while driving, and never herself contests this violation.  Thus there is no question that the officer had the authority to stop Bland. The relevant US Supreme Court decision on this issue is Terry v. Ohio, 392 U.S. 1 (US Supreme Court 1968).

Second, there’s the request (order?) for Bland to put out her cigarette and (after she refused to do so) order to her to step out of the vehicle.  I’ve read many objections to both of these, including many claims that they were unlawful conduct by the officer.

Once the officer has made a lawful stop he is permitted to take whatever steps may be reasonably necessary to ensure the safety of himself, the suspect, and the general public while the stop is taking place.  This includes asking the driver of a stopped vehicle to step out of the vehicle, and would even authorize the officer to handcuff the suspect during the duration of the stop. The relevant US Supreme Court decision on this issue is Pennsylvania v. Mimms, 434 U.S. 106 (US Supreme Court 1977).

The fact that officers making a traffic stop rarely take these additional cumbersome steps does not change the fact that they have the authority to do so.

There’s quite a bit more analysis in that post, so feel free to click through and read the whole thing.

The New York Times report does, however, provide some fodder for the notion that Bland may have grasped eagerly at the opportunity for a confrontation with law enforcement:

In her final months, Ms. Bland had recorded videos online about racial issues and policing.

Anyway, folks, please remember:  If a police officer has decided that you are a suitable target for arrest, you will be arrested.  Non-compliance will only result in you being arrested tired and with varied joint pains, contusions, and abrasions, and potentially much worse.  You may believe you are being arrested unlawfully, and you may even be right, but the place to argue the issue is in court with counsel representing you, not on the side of the road.

This poor, warped young woman was given MUCH more…and quicker…due process in Waller County than she would have had in many other places around the US.

She was magistrated on Saturday morning, IIRC, and bail was set at a very tractable $5000. In many places, she would have sat in jail until Monday.

From all I’ve seen, she was treated with outright kindness by the jail staff, especially relative to most jails.

There DO appear to be some lapses in procedure and policy that are ALSO being investigated, along with novel possible improvements, by a panel including a guy I know from Hempstead, Texas, who is your typical criminal defense guy in terms of his politics. They have not completed their work at this writing.

” If a police officer has decided that you are a suitable target for arrest, you will be arrested. Non-compliance will only result in you being arrested tired and with varied joint pains, contusions, and abrasions, and potentially much worse. You may believe you are being arrested unlawfully, and you may even be right, but the place to argue the issue is in court with counsel representing you, not on the side of the road.”

Why couldn’t our President, the first post-racial POTUS, have said something remotely resembling this?

(I know. I know. Rhetorical question.)

The very people claiming how much she meant to them are the ones she turned to for bail and was refused.

And apparently that despair of being rejected by her family over a measly $500 was what drove her over the edge.

And now, they want to sue and stir up trouble.

And apparently even that is a put on because the DA said they begged to come up to them and get statements and such and tell them the state of the investigation and he also said they were willing to make arrangements for them in Texas if they would come down.

They couldn’t be bothered but they found an ambulance chaser fast enough. (sorry Prof., sorry Andrew but they do exist in the field)

“They couldn’t be bothered but they found an ambulance chaser fast enough. (sorry Prof., sorry Andrew but they do exist in the field)”

True story: When I was a 2L, the alumnus to make the most money in a single year post-graduation was some dude just passed the bar and lived out of his car listening to a police scanner.

What kind of car? That could tell you a lot about a lawyer. Maybe you should write a book on how to select a lawyer based on their choice of live-in car. I would assume a lawyer living in a Toyota would tend to be more conservative and cautious and better at research. A lawyer living in a Kia Soul would tend to be cheap and unable to view things from a long term perspective (as well as short enough to fit).

You want the Lincoln lawyer…

Andrew,
You went to school with Matthew McConaughey? Every time I think my opinion of you has peaked, you raise the bar (that’s a legal pun). Keep up the very good work.
VG

I did NOT go to school with Matthew McConaughey.

I DID go to school with Ralph Macchio, of “Karate Kid” fame. 🙂

Ralph should have gotten a gun — a crane kick isn’t very effective unless you’re fighting a crane.

Ok, to someone my age that is much cooler, lol.

Please change “hung” in the headline to “hanged.” Juries (among other things) may be hung–people are hanged.

Indeed, thanks, fixed. I’ve been spending too much time writing about “hung juries.”

Actually Obie, I believe that’s contradicted in Bart v. Lepetomane (1974). As I recall the relevant exchange went “‘They said you was hung.’ ‘And they was right!'”