One second equals the yearly volume of farts generated by 454 cows. 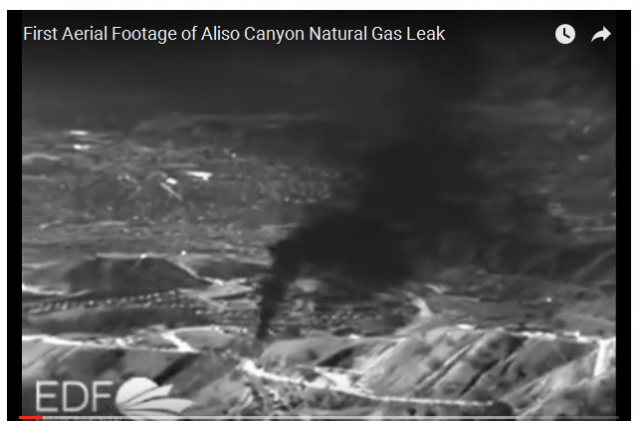 The goal of one of the most ponderous pieces of legislation ever to be generated in the Golden State, the Global Warming Solutions Act, was to substantially reduce the amount of greenhouse gas emissions.

Any gains that could be claimed, albeit questionably, from enforcement of this economy-crushing rule have essentially been wiped out by a massive leak of methane. The steady, significant release from an underground gas pipe in the San Fernando Valley area of Los Angeles began in October.

…Los Angeles Mayor Eric Garcetti has called the leak an “environmental disaster,” and the Los Angeles Unified School District shuttered two area schools for the rest of the year.

Politicians and environmentalists in California are particularly sensitive to the toll the leak may take on the environment, especially after Gov. Jerry Brown doubled down earlier this year on the state’s efforts to slash greenhouse gas emissions.

The massive underground leak at a storage facility north of Los Angeles was reported by the Southern California Gas Co. on Oct. 23, and since then has emitted more than 72,000 metric tons of methane, according to the Environmental Defense Fund, which released an aerial video in conjunction with the nonprofit Earthworks that used an infrared camera to make the gas visible.

Methane is 200 times more potent as a greenhouse gas than carbon dioxide, which has been the biggest target of “climate change” eco-activists. Methane takes a decade or more to dissipate out of the atmosphere, so this massive release is capable of having an impact for a significant period of time.

Currently, the rate of methane emission is 50,000 kilograms per hour and accounts for about one-quarter of all methane emissions in California. To put this in perspective, dairy cows have been derided as vile “methane” producers. One cow generates 110 kg of methane annually through its digestive processes. So each second, this leak equals the yearly volume of farts generated by 454 cows.

Plugging the leak is an engineering challenge:

Once the new well intersects the old one, fluid and eventually concrete will be injected to seal the pipe, rather than attempting to perform the injections at the surface. As of this past weekend, the drillers had located the broken pipe responsible for the leak. That’s no small feat, considering that the second well must be drilled far enough away to prevent any risk of explosion, and the broken line is just seven inches in diameter.

Unfortunately, we’re still months away from actually sealing off the problem. The relief well is currently at 3,800 feet, but the rest of the operation is expected to take until February or March. By that point, enough methane will have been released into the atmosphere to make an impact on the United States’ total yearly emissions — to say nothing of the costs and upheaval residents of Aliso Canyon have endured, or the financial cost of repairing the broken line.

Methane is a highly flammable, odorless gas and is treated with chemicals to give it a “rotten-eggs” smell. Over-exposures to the mixture can can cause headaches, nausea, and nosebleeds. Subsequently, more than 130 families have been relocated as a result of this disaster.

Our politicians have been busy trying to address this crisis. Hearings are being organized by state Assemblyman Mike Gatto (D-Glendale) for early next year. The initial focus will be on Southern California Gas Co.’s payment for resident relocation.

Hopefully, the hearings will prove more helpful to the Californians impacted by the methane leak than the “Global Warming Solutions Act” rules have been.

This is the sort of thing that would cause the progs to howl and gnash their teeth were it to happen on the watch of a Republican governor or president. But Moonbeam and Oblamo will go completely unscathed.

At this point, California deserves everything bad that it gets.

Rural areas under occupation of the state exempted.

Is this a natural occurrence, or was an EPA strike team involved in assisting SOCAL Gas.

I look forward to Obama dragging SOCAL executives into the White House and intimidating them into signing off on a $20 billion remediation package.

Will I now be forced to eat tofu at gunpoint? Yuk!

Comparative studies: How much methane does Algore produce?

Entirely the wrong approach. Grab a knife and fork, people, because we’re having steak tonight!

What time do we save the planet?

If I did the math correctly, that means they are releasing as much methane as all (90 million) cattle in the US, every 55 hours. Holy cow!

Your methane link says (correctly) that methane is 25 times more potent GHG than C02, not 200X. But there is roughly 200X more CO2 in the atmosphere.

In my attempts to read just a little on the atmospheric methane processes, the Wikipedia article reminded me that political garbage has infiltrated government science, especially in all things “climate change”.

“The concentration of methane in Earth’s atmosphere has increased by about 150% since 1750, and it now accounts for 20% of the total radiative forcing from all of the long-lived and globally mixed greenhouse gases.”

https://en.wikipedia.org/wiki/Atmospheric_methane
and yet it is only 2 parts per MILLION, and varies with altitude, latitude, and political attitude.

I don’t think they have any good measurements for “total radiative forcing”, nor of how long lived those gases are.

One clear conclusion from their failure is that the climate system has larger variations in the Radiative Imbalance, Forcing and Feedbacks than is predicted by the model and accepted in the 2013 IPCC assessment report.

So basically California is farting on US, but your farts don’t stink. GHGs will do a (plant) body good. 🙂

Please, oh PLEASE, tell me there is video of Leslie poring over a calculator running the equations on this. lol x 100

She doesn’t need a calculator.

If this methane is already mixed with the rotten egg additive, I bet the whole area really stinks.

Good think terrorist Mohammedans don’t read the news. If they are only working in the daylight because electric lights might set off the gas, this is a target waiting to go.

A few years ago the EPA and Department of Agriculture tried to transplant the bacteria from kangaroo gut into cows, to reduce the methane. Kangaroo farts don’t have methane. This experiment was done on a small organic farm, which used the cow plop as fertilizer in the kitchen vegetable garden. People who ate veggies from a patch so fertilized began elongating their vowels, and the experiment was stopped.