Male Feminists get no respect

Male Feminists get no respect

Even Planned Parenthood is on their case. 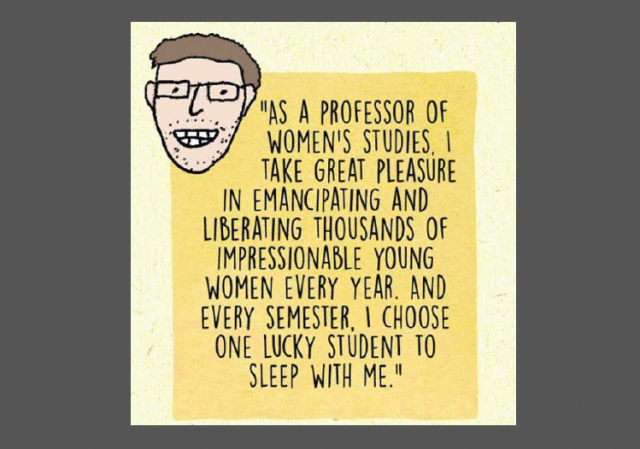 “Male feminists” have been taking it on the chin lately.

They get no respect, not even from female feminists, who view them variously as (a) insincere sheep in wolves clothing, dressing up in feminist garb to score with the ladies, or (b) sincere, but incapable of divesting themselves of all vestiges of the patriarchy no matter how hard they try.

In category no. 1, insincerity, there was the column in The Guardian in October which caused quite a stir, Why I won’t date another ‘male feminist’:

…. men looking for feminist-sanctioned romance tend to fall in to one of two categories: those who use our attraction as a sign of approval and seek out trophy feminists to clear their conscience of any inherent patriarchal wrong-doing, and outright predators who employ a bare-bones knowledge of feminist discourse to target any young woman whose politics so much as graze the notion of sex-positivity….

It’s not that I don’t think men can be feminists. There are several men in my life who have approached feminism with respect and considerate thought, who have used feminism to examine their own privilege and experiences within the world and have become better people for it.

But these men are in a disappointing minority compared to the rest of the male feminists I, and many other women, have encountered: men who use the term “feminist” as either bait or an alter-ego, assuming that their opt-in respect for women will entitle them to legions of adoring lovers – really the most anti-feminist act of all.

Similarly, in I’m Suspicious of Male “Feminists” — And You Should Be Too the author questioned the motives of male feminists:

If you’re a dude reading this, and you consider yourself a feminist, then I just have a few questions for you:

… Did you start calling yourself a feminist because you have a genuine desire to surrender the ways you benefit from patriarchy — or because you thought women would find you more attractive if you appropriated their label?

New York Magazine ran this brutal fake magazine cover, as part of a story titled So You Want to Be a Male Feminist? Maybe Don’t (via this tweet): 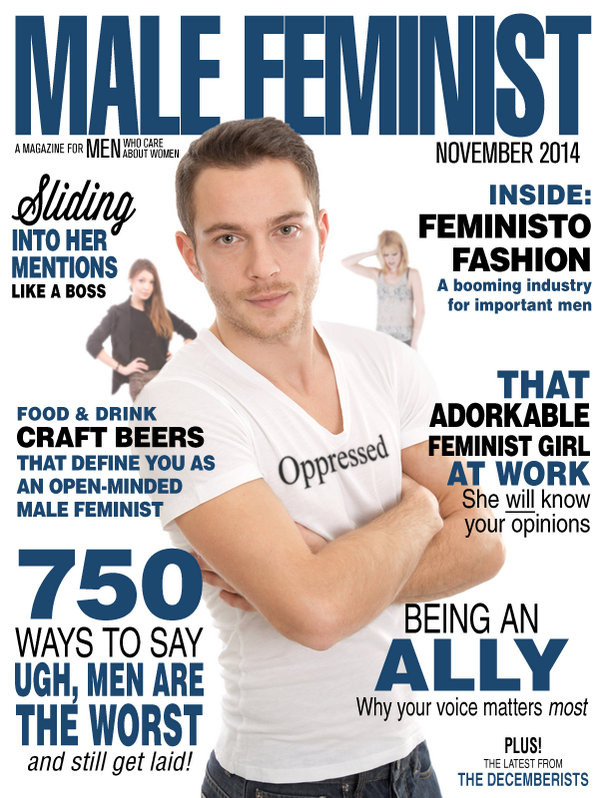 In category no. 2, we have the sincere but insufficiently feminist male feminists, as epitomized by this graphic circulated on December 23, 2015 by Planned Parenthood and currently a topic of much mockery on Twitter: 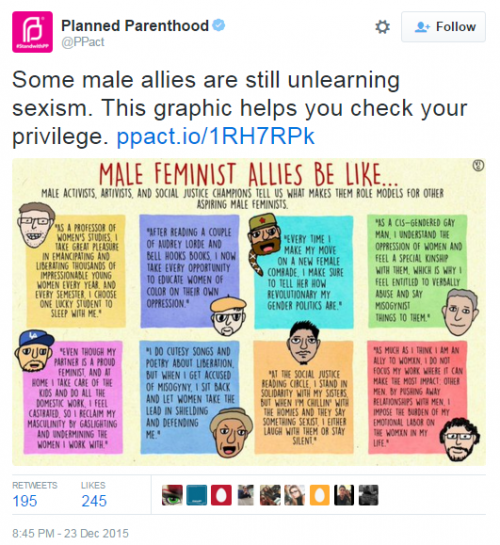 The graphic is from the Feminisiting website, and on close inspection is quite disrespectful to men trying their best to be good feminist allies. Here’s the whole thing, click to enlarge even more: 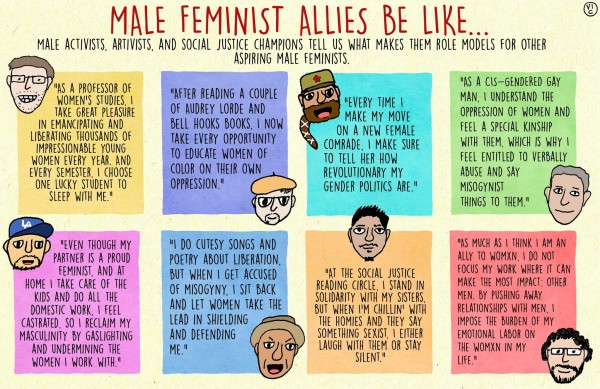 The Featured Image is my favorite panel in the graphic. The male Women’s Studies Professor.

Andrew Klavan seems to think the next panne is pretty smart. 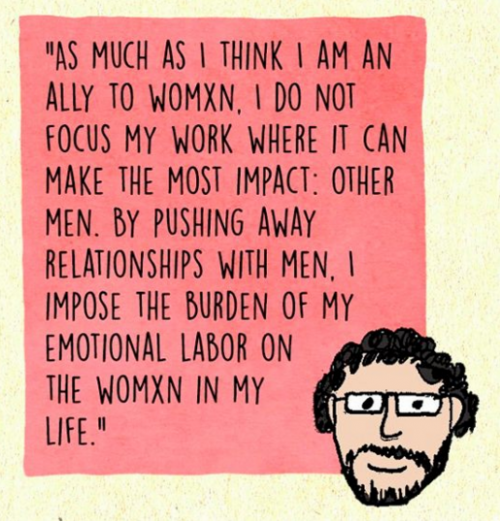 The spelling of "women" as "womxm" is the most coherent statement on this infographic. #TheMoreYouKnow https://t.co/UJ5jo4KSyk

The mockery on Twitter both of the graphic and Planned Parenthood spreading it is pretty brutal.

But not everyone is amused.

OK, Ok. How about this? I become a male lesbian? Will that make it all OK?

A male lesbian. That makes it hard to figure out who’s on top. Oh, I get it! A male lesbian is a lesbian who doesn’t need a strap on.

Do you renounce the patriarchy and all its works?

Do you renounce male privilege and all the learned courtesies?

Do you renounce superior masculine body strength and all its benefits?

Well, since the principle is hit them where it hurts, they gotta take it on the chin cuz they’re castrati.

But their chins are so weak.

Of course they get no respect.

Modern feminists are a joke. Instead of applying themselves to fighting real and rampant discrimination against women in the Islamic world, they have to invent reasons to be mad at fellow Americans.

Instead of campaigning fiercely to end the death penalty for adultery, genital mutilation, and laws against women owning property, they whine about a wage gap that has been quantitatively proven to NOT EXIST.

Because modern feminists are cowards. They can’t confront people that would actually fight them, so they are reduced to whining and assaulting people that aren’t actually a threat to them. Typical liberals.

Brilliant, and by far the funniest line in the whole piece:

“Plus! The latest from The Decemberists”

Why do all the men in the cartoon look black or Hispanic or Indian or Asian or something? Doesn’t that make the cartoon a racist, culture- and ethnocentric attack men of color? How can we honestly support this kind of bigotry?

I’m a lesbian in a male body.

It is to laugh. No sane person thinks this way. Only the mentally disturbed believe that any criticism of women is misogyny. That anything a man says is wrong.

That somehow a culture run by and for women would somehow be better. If it even managed to perpetuate itself it would be a miracle. (and one owed to men btw.)

Note how as western culture becomes more and more feminized the lower the birth rate and the weaker the men. And just when some aggressive men might be needed.

Until it doesn’t or until they want to do that clitorectomy on their female child.

I have lost so much respect for women over the last 30 years. Which is regrettable because so many actually still believe and live the way that godly women should but so many have been seduced by the false claims of the feminists that it just isn’t worth the trouble to find out whether they really mean what they say or are just confused as to what they are really saying.

Folks, it isn’t about women’s rights or anything else. Feminism is just another tine in the Alisky push to Balkinize the west. Note that men targeted are white and productive. No one goes after the black or Asian man, let alone the islamic man. It’s white males that are the target of the entire feminism movement.

Yikes! The Yrony of it all. The groupthink of the ‘y’ hating “womxn” quickly becomes a means to exclusion and eXXoriating seXXism not unlike what they eXXplode against.

Once again I am forced to conclude that the war between the sexes is a suicide pact.

As for Planned Parenthood… spontaneous conception is a fantasy. And what to make of their business model that includes human trafficking and clinical cannibalism?

“who employ a bare-bones knowledge of feminist discourse.”

Is there any feminist discourse that gets beyond ‘bare-bones’ albeit repeated obsessively? After all, anything beyond ‘bare-bones’ would require abstract thinking and upper end abstract thinking is the domain of the boys (by one standard deviation at the high end of the IQ scale). So says this study: http://drjamesthompson.blogspot.com/2013/09/are-girls-too-normal-sex-differences-in.html

How unfortunate to live in a world where nature creates privilege.

This is just a hoot! As a FORMER lefty and feminazi, now no longer either, I have zero respect for so-called male feminists. If you’ve ever been around one or a few, you know what I’m talking about. Female self-hatred is not uncommon. Male self-hatred is just a psychosis. Women don’t actually have to do or be anything; we just are. This is NOT true of men. When a culture’s men cease to be men and have pride in their masculinity, it’s the beginning of the end. This is not a joke.