Threatens to take over “Palestine” and threatens Israel 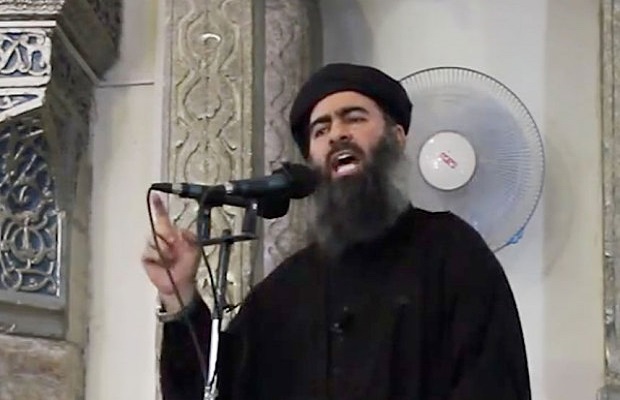 As Professor Jacobson noted, under the Obama-Clinton foreign policy ISIS has grown in strength and in territory.  Now ISIS’s leader, Abu Bakr al-Baghdadi, is goading the west in what might be considered a childish taunt if ISIS hadn’t been allowed to grow and prosper into a lethal organization with global reach.

The leader of the self-declared Islamic State issued a defiant message to the West, saying that “Crusader” did not dare fight on his turf.

In a rare public statement – his first in seven months – Abu Bakr al-Baghdadi said Western countries had “learned from” previous wars in Iraq and Afghanistan.

“Crusaders and Jews don’t dare to come on the ground because they were defeated in Iraq and Afghanistan,” he said in a 23-minute long audio message released through an Isil-run internet account.

In addition to such taunts, he also urged Saudis to rise up against their government and warned that ISIS would soon be in “Palestine.”

He also called on Saudi citizens – the second biggest contributor to Isil ranks – to “rise up” against their government as he dimissed the kingdom’s newly formed Muslim coalition against the caliphate.

He also said Islamic State of Iraq and the Levant (Isil) would soon be in Palestine to establish an Islamic state there. “Jews, soon you shall hear from us in Palestine which will become your grave,” the voice, purporting to be Baghdadi, is heard saying.

“The Jews thought we forgot Palestine and that they had distracted us from it,” he says in the recording. “Not at all, Jews. We did not forget Palestine for a moment. With the help of Allah, we will not forget it… The pioneers of the jihadist fighters will surround you on a day that you think is distant and we know is close. We are getting closer every day.”

Reports of his possible death were clearly exaggerated.  This is the guy who repeatedly raped and tortured American hostage Kayla Mueller prior to her death.

Abu Bakr al-Goatrammi needs a heapin’ helping of something like this: https://www.youtube.com/watch?v=hhmXleZXAr0

We currently have a sniveling Marxist pussy in the White House… it isn’t going to be that way for long.

Baghdadi, your mama’s so fat and ugly she makes buttermilk curdle.