In major victory for Speaker Pelosi and Majority Leader Reid, OMNIBUS heads to Obama for signature

In major victory for Speaker Pelosi and Majority Leader Reid, OMNIBUS heads to Obama for signature

with more Democrat than Republican votes in both House and Senate 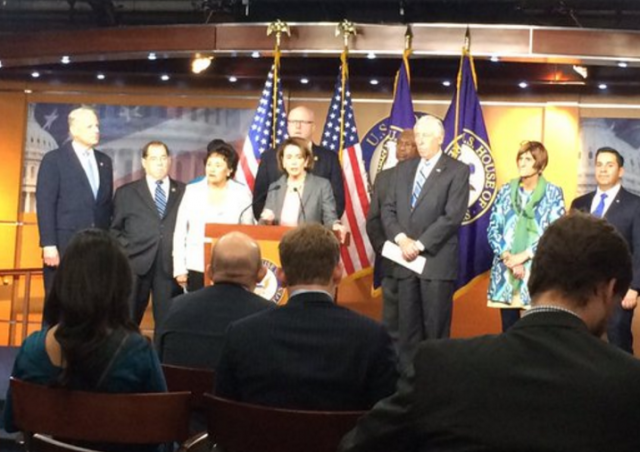 Paul Ryan wanted a budget and lacking a budget, we got another Omnibus Bill stuffed with all sorts of things we needed to pass in order to find out what’s in it. 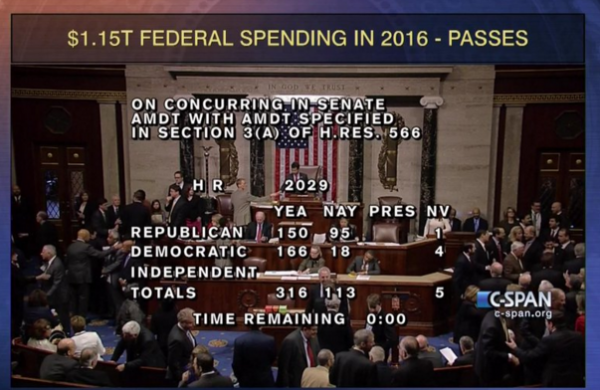 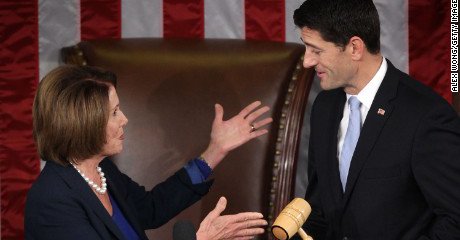 Here’s the list of no votes (via Rob Bluey): 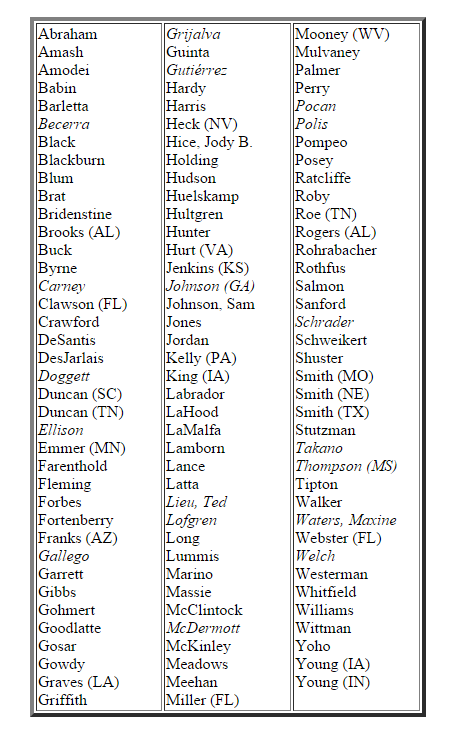 The 150 Republicans voting for this Omnibus bill is slightly lower than under Boehner, and precisely the number the Republican Whip predicted would be needed on big spending bills:

The 150 GOP yeas on the omnibus was PRECISELY the nmbr Whip Scalise mentioned in his missive about GOP goals for big bills like this one.

Harry Reid was happy to see the House pass the measure, which now moves on to the Senate:

Our omnibus goals were: roll back sequester, parity in funding for Pentagon and middle class, and keep off poison pill riders. We did that.

Sen. Mike Lee (R-Utah) has harshly criticized how Omnibus has proceeded through Congress:

We’re being told that the omnibus and tax extenders grand bargain is a legislative accomplishment of the highest order – a shining example of what can happen when the two parties in Washington come together to “get things done.”

And, in a sense, I don’t disagree. This bill is the textbook example of how Washington actually works. And that is the problem.

Because all too often, when Washington “works” it does so not for American families, workers, or future generations, but for political elites and the sprawling ecosystem of lobbyists and special interests that subsist on the federal government’s largesse.

This bill is a case study of Washington’s bipartisan bargains turning into special-interest bonanzas. Like so many policies that come out of Congress today, the omnibus and tax extenders have something for everyone….

I’ll be the first to admit that there are some laudable provisions in both the spending and the tax bill that make important policy reforms.

There’s the lifting of the government’s foolish ban on crude oil exports, and the extension of several sound tax provisions that never should have been temporary in the first place.

But the process has been rigged so that we can’t vote on these commendable policy reforms by themselves. In fact, we can’t vote for any one of these sensible, positive reforms without also voting for each and every dysfunctional, irresponsible, and unsustainable policy found in the two-thousand-page bill.

Even John McCain agrees with Lee on the process and substance:

The 2000-page #omnibus crafted in secret w/ no amendments is a recipe for corruption. https://t.co/4zdpTpN7fV

The Senate is voting right now. You can watch on C-Span live. Based on the way procedural votes are going, seems certain to pass.

The bill passed the Senate: 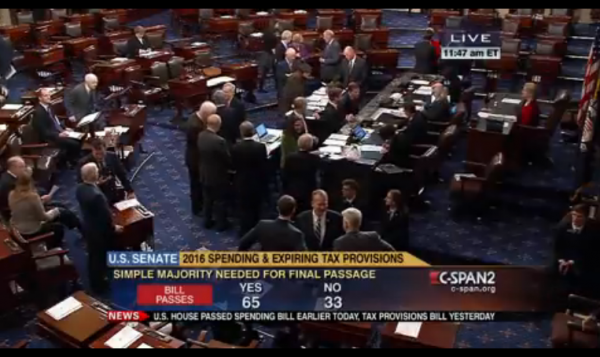 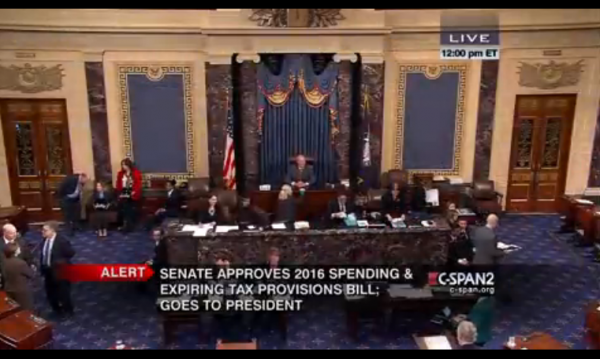 Sen. Marco Rubio (R-Fla.) missed Friday’s Senate vote approving a massive $1.8 trillion end-of-the-year spending bill and tax package — a day after he suggested that he would try to slow the legislation down.

The Florida Republican, who is running for president, was the only 2016 contender to miss the vote, which is the Senate’s final vote of the year. …

Rubio’s missed vote comes after he suggested that he could use procedural tactics to try to slow down the legislation, which he said he opposed.

This will haunt his campaign.

It is typically asserted that Trump’s rise is the product of the Republican party’s rank unpopularity among its traditional electoral base. “Of course the voters are rebelling,” the argument goes. “For years now, the GOP has overpromised and under-delivered; it has failed to do anything substantive on immigration; it has been too keen to cozy up to its donors. And then along comes this guy, and provides an outlet. What did you think was going to happen?”

Evidently, there is something to this critique. But it is not the catch-all excuse that some believe it to be, and nor does it justify the extent to which many Americans are happy to indulge the man. It cannot explain, for example, why Trump’s obvious lack of interest in liberty and limited government is so steadfastly ignored by his apologists. It cannot explain why his open hostility to the Constitution is met with equanimity. And it most definitely cannot explain why, as I write, thousand of his fans are running around justifying Trump’s admission that he admires Vladimir Putin.

Just a few hours ago, Trump confessed exactly that. He was not caught in a “gotcha.” He was not misquoted. He was not led down the garden path by the “liberal” or “mainstream” or “pro-Obama” media. Rather, he said, as plain as day, that he has “always felt fine about Putin”; he called him “strong” and a “powerful leader”; and he suggested that he should be respected for his “popularity within his country.” Nothing could prise him from this reverence. When it was pointed out to him that Putin is a man who “kills journalists, political opponents, and invades countries,” Trump said flatly, “At least he’s a leader,” which I can only imagine sounds an awful lot better in the original German. Then, for good measure, he took aim at the American system: “Unlike,” he added, “what we have in this country.”

Why is considering the fire an improvement over the frying pan?

Are those REALLY all the options you see?

This is an outright betrayal. Up and down the line.

Disappointed and disgusted is more apt.

I’d say I was surprised at the scope, if anything.

And yet, they’re better than the alternative, right Rags? Right? I mean, that’s been your thesis.

You were always free to vote Deemocrat, Libertarian, or not at all. Form a third party. Nothing I can do would stop you, and I wouldn’t try.

I’ll try to persuade, and I do.

My district has been sold out again. I can’t say I’m surprised; my critter (R) was bought and paid for years before winning elective office.

The party that surrendered its principles long ago will continue to wonder why its rolls keep shrinking.

Does this include a free pony for every child in America?

Pony, my hind end! For that money, I want a unicorn.

This is exactly why I left the Republican party; I have only rejoined this bunch of knaves, thieves and liars in order to vote for Donald Trump.

If Trump doesn’t win- this country is finished. Maybe it’s too late already, but he’s the last chance we have to turn things around!

I get the frustration, but I doubt Trump can or will be able to fix anything. The corruption is so systemic and pervasive I don’t think it can be solved using the normal political process. I think the only way to restore constitutional order is with a temporary right wing Pinochet-like coup. And that ain’t gonna happen.

So get used to both parties continuing to move the country left, until one day you end up with socialist left wing authoritarianism. Seems inevitable to me.

Vote for Trump or Cruz, so you can say that you tried when things fall apart and you have to do what must be done.

John McCain chided Congressional corruption and betrayal of the American people??? I don’t think we’d be any better off today had he won in 2008.

To say it’s disheartening is a gross understatement. Very few in Congress have been able to resist the (not-so) subtle corruption of principles that seems to be an endemic & highly contagious disease. Sort of DC Swamp Fever.

Convention of the States to Propose Amendments (see The Liberty Amendments)

Primary and WIN every single election with a rock-ribbed Conservative.

Revoke ALL their pensions, benefits post-election AND block them from becoming lobbyists

Get the corruption ROUTED out of our states and ESPECIALLY out of the (now completely RINO-establishment infested) Republican Party!!

And pray we don’t get hit with another 9/11-scale terrorist attack – or worse! – in the meantime…………

I gave McCain a couple bucks back in 2008 and have been getting Republican junk mail sporadically since that time. Below is an email I received from Speaker Ryan…just today!

“It is a new day in the people’s House.

We’re opening up the process. We’re finding common ground to advance the nation’s interests. We’re getting the House back to being the people’s House.

Now we’re ready to move forward and raise our gaze.

That’s why, in a speech at the Library of Congress earlier this month, I laid out my number one goal for 2016: assembling a bold, pro-growth agenda.

We have to treat this like the generational defining moment that it is, and offer the people of this country a real choice.

Together – and only together – we can restore a confident America.

MaggotAtBroadAndWall in reply to buckeyeminuteman. | December 18, 2015 at 6:18 pm

80% of the population say the country is on the “wrong track” in polling. Voters have given Republicans the largest majority in the House they’ve had in almost 100 years. And Ryan responds by passing a budget that gets a higher percentage of Democrat than Republican votes – essentially giving Obama everything he wants. I thought Republicans were going to pass each appropriation bill separately, so they could have a greater influence on which priorities get funded and which don’t.

I really don’t get it. They’ve squandered whatever goodwill they had. They bellyache about Trump publicly, but it’s almost like they secretly want him to get the nomination with moves like this.

I don’t understand what you think a President Trump would have done to affect this outcome?

So we might as well do away with the House and the Senate and just appoint Trump as Emperor?

I can just hear him declaring L’Etat, c’est moi! in the same reality-TV guy voice he does “You’re fired!” in.

Good lord!
A veto. You must know what it is. It has nothing to do with imperors.

Hah. Well, some emperors are imps after all.

Lindesy Graham voted FOR the omnibus spending bill, alone among the other Republican senators running for the presidential nomination. In what possible way could he possibly believe that this would help him boost his 0% share of the candidates’ votes?

He’s shoring up his position to become a lobbyist once he leaves politics (which will probably be very soon…). Someone, somewhere, will be grateful for his vote today.