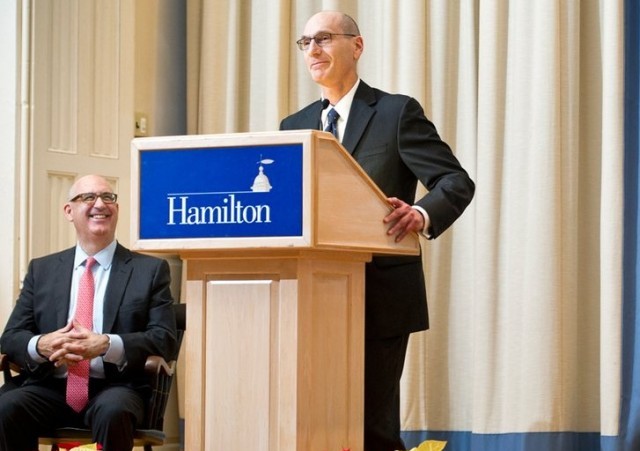 A group of students calling themselves The Movement issued a list of 83 Demands to the Hamilton College administration and trustees. 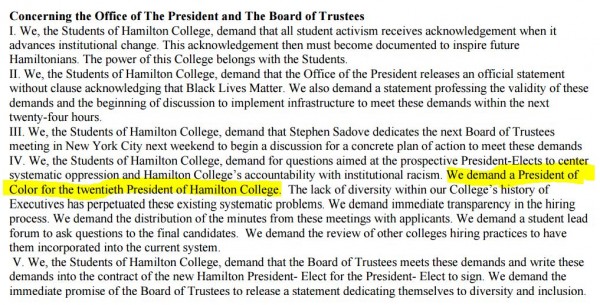 Hamilton just announced that David Wippman, former Cornell Law School Professor and currently Dean of the University of Minnesota Law School, would be the 20th President of Hamilton.

This write up (pdf.) on Wippman when he joined U. Minnesota explains his scholarly and leadership background. The Hamilton student newspaper, in what appears to be a pre-written article, is effusive about Wippman’s qualifications.

Here he is being introduced:

Maybe my eyes deceive me, but Wippman does not appear to be “of color.”

In fact, to quote Mark Steyn’s description of Elizabeth Warren, Wippman appears to be

Face it, The Movement, Hamilton just isn’t that into you and your Demands.

At least one student on Twitter appeared not to be happy with the tone of the announcement: 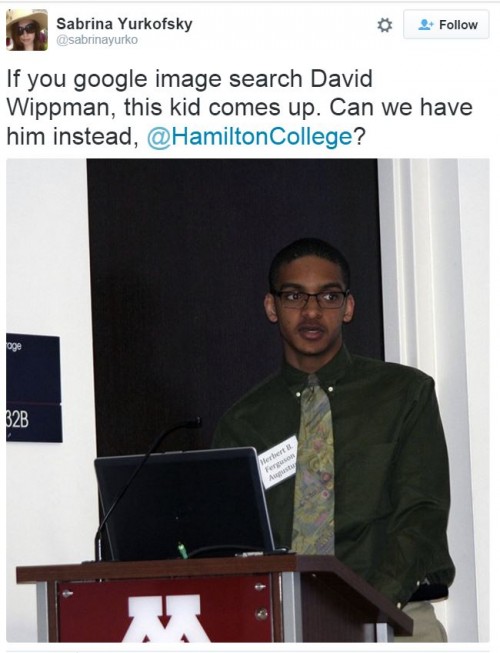 Will Wippman be able to resist the campus “Demand” craze? He’s not saying, until he takes office:

“I’m well aware of the issues around diversity and inclusion raised both here and around the country,” Wippman said at a media conference prior to the campus announcement. “They are incredibly important issues that need to be addressed. I’m really used to dealing with a lot of the same kinds of issues in international rights. … I think the international framework will help engage different communities and constituents that make up the Hamilton family.”

The group — The Movement — is comprised of a group of students who seek to “establish their presence on campus in response to a series of racially charged events.

Some of their demands involve matters of diversity such as requesting an official statement stating black lives matter, free tuition to all indigenous people, replacing he and she pronouns with “they” and instituting a rape crisis center inclusive to people of color and LGBT+ people.

Wippman said he wasn’t comfortable addressing those concerns yet, as he wasn’t in office at the time.

I don’t know him and never met him, but he did have a good response when anti-Israel protesters recently disrupted a lecture by an Israeli professor.

But whether a speaker’s views are controversial is beside the point. As members of a University community, we should welcome—indeed, insist—on hearing a wide range of viewpoints, and we should condemn any efforts to silence free speech through protests of the sort that took place at the Law School yesterday. The Law School will continue to do both.

I hope you restore glory to my alma mater, and allow Western Civilization back on campus.

Besides, like me he may identify as an Asian black transgender single mother queer.

Thus, everything is now explained! Thanks for the information! 😉

I always check “Other” on race questions, because they never have Neon White as a choice.

If it is a fill in the blank question that asks for “race”, I put in Human.

When I was seven years old I demanded a pony for Christmas.

And now that you are much older you have the back half of that pony as your President.

See… good things come to those who wait.

White is the plurality of colors. The students should demand a quality education in science and morality.

They wanted a person of color and they got a guy so pale, if you put him in front of a white wall, all you’d see is the eyebrows.

Wonder if that is a hint about how their other 82 demands are gonna pan out, lol?

Heh. The Movement nitwits thought that a black school president would get them free cell phones.

I just watched Rudolf for something like the 50th time, and I think he kinda looks like the tall elf, minus the pointy hat.

“[Inclusion and diversity] are incredibly important issues that need to be addressed.”

guess these dummies havent learned anything from electing a president of color in 2008.

…”Western Civilization has left the building”…

He should wear blackface.

Too bad Clarence Thomas and Ben Carson are currently engaged. What would the reaction have been if one of them had been appointed to the position?