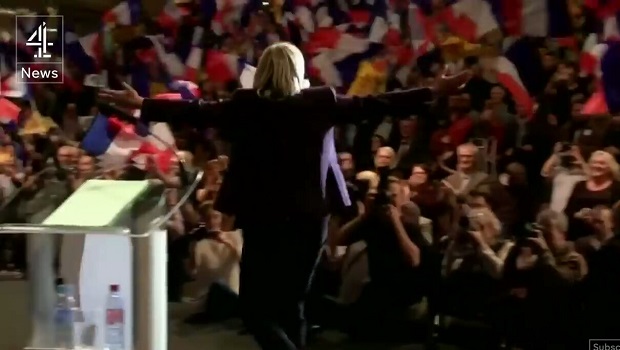 There was a sense of panic on the political stage in France as two mainstream parties Conservatives and Socialists scrambled to prevent French regional government from falling into the hands of Front National in the second round of the voting. Last week, Front National under the leadership of Marine Le Pen had emerged as the leading political party ahead of President François Hollande’s Socialists and former French President Sarkozy’s conservative Les Républicains in the first round of the French Regional Elections.

Before the second round of polling, the Socialists pulled out their candidates in key constituencies in a bid to thwart Front National. The tactical voting worked and Socialists voters opted for Sarkozy’s Les Républicains to shut out Front National from the regional government, preventing a historic win for the Right-Wing party. British Newspaper The Telegraph reports:

The far-Right Front National was thwarted in its bid to clinch a historical electoral victory in France on Sunday after failing to secure power in any of the country’s 13 regions.

The ruling Socialists of President François Hollande appeared to have fared better than expected, taking five regions, while the opposition centre-Right took seven, including the Paris region for the first time since 1997.

Voting had taken place under high security with France still under a state of emergency exactly a month on from the jihadist attacks in Paris that claimed 130 lives – a climate that helped the FN reap historic gains in round one a week ago.

Front National might have been held back — for a while — but party’s rising popularity shows that its anti-EU and anti-migration message is resonating with the French voters. While mainstream parties have been hesitant to make the obvious connection between the terrorism on the French streets and the radical Islam, Front National’s Marine Le Pen has no such inhibitions. After the Paris attack last month Marine Le Pen said, “Islamist fundamentalism must be annihilated, France must ban Islamist organisations, close radical mosques and expel foreigners who preach hatred in our country as well as illegal migrants who have nothing to do here.”

A recent survey suggests that Front National is gaining wider acceptability among French electorates. According to the poll, 57 percent of the voters don’t see Front National as a political outcast. The poll suggested that Front National is now getting votes from a wide cross-section of French society and it might no longer be fair to label party’s support base as stereotypical EuropeanFar-Right.

In past, anti-EU politicians like UKIP’s Nigel Farage have refused to form pan-European alliance with Front National, mainly due to the dark shadow cast our the party by its founder Jean-Marie Le Pen. Acting prudently, Marine Le Pen has kept distance from her father Jean-Marie Le Pen’s antisemetic views and last year expelled the 87 year-old former party chief.

The biggest winner in terms of electoral success was the centre-right Les Républicains, winning seven of the country’s 13 regions that went to poll in the French mainland. President Hollande’s Socialists won in five regions. It might be too early for mainstream parties to celebrate the defeat of their Right-Wing nemesis. The big parties had nothing to offer but instead played, to borrow a liberal term, “politics of fear” — trying to scare the voters of a Far-Right takeover.

Front National is down but not out. Even the liberal British newspaper The Guardian was willing to concede that “Front National [has been] held back, but its trajectory [was] on the up.” The newspaper acknowledged:

There were no winners in an election that consisted of establishment parties running around at the last minute trying desperately to outwit what they warned was a racist, xenophobic, Islamophobic and overwhelmingly dangerous party.

There was no serious examination of the reasons why voters were turning away from the parties of government and flocking to the FN not just as a mere protest vote, but as a political alternative. [The Guardian, December 13, 2015]

Tactical manoeuvring can keep Front National from political office — for the meanwhile — but it cannot pacify rising popular dissent to EU policies and mass migration. The day after election, Front National still remains the strongest political force in France. Marine Le Pen has only strengthened her claim at the French Presidency going to be held in 2017.

Video: CNN reports on the second round of French regional elections:

The French Left and Right bitterly cling to anti-native policies and associated graft. I guess they fear a revolution part deux. It didn’t work out well for the left-wing and coinciding interests last time.

Sounds like what happened in Sweden earlier this year. The two spineless establishment parties agreed to a “power-sharing” deal even past the next election or two, just to shut out the far-right Sweden Democrats. Not that Europe’s far-right is anything desirable, but the collusion of the head-in-the-sand wing only delays the inevitable, since the terrorists aren’t going anywhere.

These parties care more about Gov. graft, than taking back control of the country.

Multiculturalism will spawn all sorts of havoc when all you have to offer is government dependency in the name of liberty.