“Sanders is surprisingly one-dimensional as a candidate.” 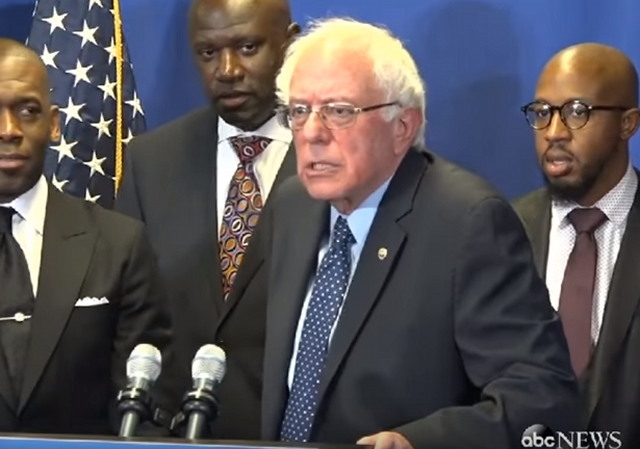 It’s safe to say foreign policy and national security aren’t Bernie Sanders’ strong points. He doesn’t want to talk about ISIS and terrorism, he wants to tell you how millionaires and billionaires are stealing money from the poor.

Right on cue, a Sanders spokeswoman on Tuesday morning informed reporters that they shouldn’t even ask questions about the Islamic State. We are re-upping this post from Monday, as it is now even more apropos.

For the record: This was a 100% serious statement. No sarcasm or joking. https://t.co/5qA3YaFR8N

Sanders built a movement in the early days of the race on the passion he exudes from every pore when talking about economic inequality. The contrast between Sanders’s “people powered” campaign and the top-heavy, corporate feel of Hillary Clinton’s effort was striking. And Sanders is, without question, closer to the true heart of the Democratic Party than Clinton on the vast majority of domestic issues.

The problem for Sanders is that external events changed the conversation in the race, and he has been unwilling or unable to change with it.

Here’s a clip of Sanders getting a little cranky when media folks asked him about ISIS despite being warned by his campaign not to do so:

Hoping to reach African-American voters nationally in his bid for the Democratic presidential nomination, Sen. Bernie Sanders on Tuesday toured the West Baltimore neighborhood where Freddie Gray was arrested — and likened the poverty he observed to that of the Third World.

The independent senator, who describes himself as a democratic socialist, walked the streets of Sandtown-Winchester for about 20 minutes, joined by community leaders and a swarm of cameras that mostly blocked his view of boarded rowhomes and crumbling marble steps. A handful of residents joined the spectacle, and occasionally broke out in chants of Gray’s name.

The scene provided dramatic visuals of the economic inequality Sanders has made the center of his campaign, offering a new backdrop from which to argue for a higher minimum wage, tuition-free public college and tougher federal regulations of the nation’s banking sector.

“Anyone who took the walk that we took around this neighborhood would not think you’re in a wealthy nation,” Sanders told reporters later at the Freddie Gray Empowerment Center in Bolton Hill. “You would think that you were in a Third World country.”

Remind us Bernie, which party has controlled Baltimore since 1969?

“He doesn’t want to talk about ISIS and terrorism…”

Well then, THAT is the SOLE question Sanders should be asked until he squeals.

Ah, Sanders is using the old radicalized wallet ploy. It works on me. I’ll stay far away from him.

Baltimore’s problem is NOT poverty. It is potential not being used and lack of motivation because of government subsidies. Government is one element of the problem. The other element is the people of Baltimore waiting for more government.

Opportunity knocks. It knocks for Baltimore but Baltimore is in dependent mode.

. . . and Uncle Bernie doesn’t want to talk about Hillary’s e-mails, either.

Of course he doesn’t want to talk about ISIS. His entire campaign has been predicated on the fact that he will give voters the most free stuff out of anyone. If people start asking him about ISIS that means he’s going to actually have to come up with a plan. You can’t buy people with foreign policy. Only cold hard cash is going to do that.

Umm, and I thought when asked about ISIS Bernie would talk about the weather…..

This guy is as lame as Hillary Clinton. Only better-looking.

[…] “SURPRISINGLY ONE-DIMENSIONAL AS A CANDIDATE:” Don’t Ask Bernie Sanders About ISIS — And Get Off His Lawn! […]

Bernie is running for Mayor of the United States.