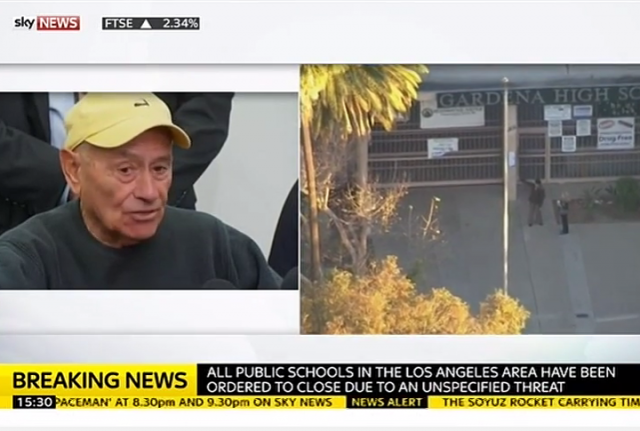 Last week, we reported that one of the San Bernardino killers, Syed Rizwan Farook, had pictures of educational institutions on his camera, indicating that high school and college campuses were potentially being targeted for future terror acts.

Tuesday, the entire Los Angeles Unified School District has been shut down because of credible threats involving bombs and packages:

All Los Angeles Unified School District schools were closed Tuesday until further notice after LAUSD received a “credible threat,” according to school district officials and police.

The “messaged” threat was received electronically and mentioned backpacks and other packages, Superintendent Ramon Cortines said at a morning news conference. He described the nature of the threat as “unspecified.”

Earlier, another LAPD official described it to KTLA as a “terror threat.”

Cortines characterized the threat as “rare,” and said it was directed to “students at schools.”

He added it was made to “many schools, but did not identify any by name.

Sky News offers this video of the press conference in which Cortines explained the situation:

The LAUSD head noted that the events in San Bernardino weighed into his decision:

“I as superintendent am not going to take the chance with the life of a student.”

“We get threats all the time,” he said. “We do evacuate schools, we do lock down schools, etc. We do not release students until we notify parents.

Perhaps because San Bernardino is so close, Los Angeles officials chose to be extra cautious. Across the country, New York officials declared a similar threat to be a hoax:

New York City schools were among many districts around the country to receive an email terror threat Tuesday, but police have determined it not to be credible and are investigating it as a hoax, city officials said.

…“Based on the information that we have, this was a very generic piece of writing sent to a number of different places simultaneously and also written in a fashion that suggests that it’s not plausible, and we’ve come to the conclusion that we must continue to keep our school system open,” Mayor Bill de Blasio said. “In fact, it’s very important not to overreact in situations like this.”

Part of the reason given for the declaration is that Allah was not spelled with a capital “A.” City officials assert that real jihadists would not make that grammar error.

Basing such a significant decision on the English proficiency of radical Islamic terrorists seems weak, so hopefully there is more information related to this determination that hasn’t been released.

This chaotic situation is the direct consequence of Obama Administration policies, which include screening patriotic Tea Party activists more robustly than militant jihadi brides and basing our military tactics on Islamic prophecy.

Welcome to the “new normal”, in which American education officials must decide when to give their districts a “Bomb Day” off from school.

As for Alaska… we will know if there was a credible threat if we hear “Allahu Ak-burrr!” from “ICES”.

this was NOT a credible threat, NYC received the same one and deemed it non credible, tne FBI also said not credible.
The retiring head of LAUSD born in 1932, is a senile fool who didn’t want any possible damage be done on his watch.
Instead almost 700,000 students, teachers, drivers etc.
have beeen freightened for no reason.
How many kids were left alone, unsupervised,
how many low income parents had to choose between making
a living or taking care of kids.

Been following this on my own blog. Latest I saw was that it may indeed be a hoax. Apparently LAUSD didn’t consult LAPD before deciding to close schools:

You know that kid in Texas who got in trouble because of the blaster on his Star Wars shirt? Well, last night was the premiere of the new Star Wars movie.

How many dangerous T-shirts would have suddenly appeared in L.A. schools today? These are pictures of STORMTROOPERS, people… if just one shirt had gone off in a crowded cafeteria, HUNDREDS of children could have been missed by the blast.

It’s time for some common-sense gun laws to prohibit science fiction weapons from appearing on T-shirts. For the children.

How would that affect wet tee shirt contests?

You know the saying “you can put someone’s eyes out with those things”?

We MUST do something to stop weaponized T-shirts.

The link for “basing our military tactics on Islamic prophecy” is broken.

The heading of this post is in error. “Credible bomb threat” should be in quotes.

Yes, I’m kind of wondering who deemed it “credible”? If it was just anonymous unnamed “school district officials” who deemed it such, I’m not sure that I’m confident they have the expertise to assess international terror threats.

Follow-up question: Has there ever been an Islamic terror attack that was preceded by a warning note like this?

ISIS only occasionally has to pull something off, most of the time they can just make threats and the west dissolves in a puddle of melted jello.

Well, now we know that it only takes one misspelled anonymous email to shut down a 700,000-student school district. So there’s that.

A properly spelled one would probably shut down the public school system statewide as people struggled to read it.

(I hope I fixed all my typos in that comment…)

Denver area students got the day off because it snowed

LA area students got the day off because LAUSD got snowed.