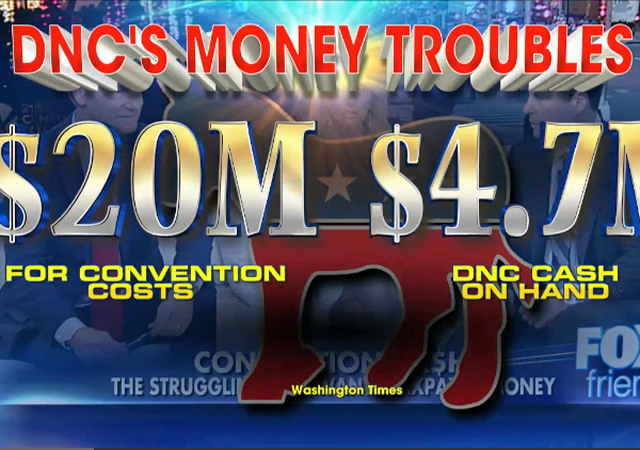 Last month we reported that the DNC was going into debt while the RNC was raising millions. In a new but related development, the cash poor Democrats want taxpayers to help pay for their national convention.

Already struggling with finances, the Democratic Party has drafted a plan to have taxpayers help pay about $20 million for next summer’s nominating convention, reversing a change Congress approved just a year ago.

Democratic National Committee Chairwoman Debbie Wasserman Schultz, who is also a congresswoman from Florida, has drafted a bill to restore money that both parties used to receive from the federal government to help defray the costs of running their quadrennial conventions.

The Congressional Budget Office revealed the move in a letter released Friday, which said Ms. Wasserman Schultz’s proposal to tap a presidential campaign fund would likely mean each party could get about $20 million in taxpayer money to help with costs. The DNC is facing tough financial circumstances.

FOX and Friends covered the issue yesterday. Video via the FOX News Insider:

As you might expect, not everyone is on board.

Typical: Dems run out of money and want tax payers to pay for convention https://t.co/nndBchueVm via @washtimes — Dan (@danieltobin) December 14, 2015

Not a joke: Democrat Party wants US taxpayers to bail it out https://t.co/6ccSYQCB4E #toobigtofail

@foxandfriends get your own money you sponges. You’ve been living off the taxpayer with your policies for decades. — Bobby Shelburne (@bobstrodamus) December 14, 2015

@foxandfriends why don’t they ask the Clinton foundation

They never saw a dollar that they couldn’t spend. These are the same people who drove up our debt. The taxpayer should not be on the hook for anymore spending irresponsibility. If they can’t afford it, then they don’t get to have it.

They’ve gone from shameless, to entitled, to now downright DEMANDING money from taxpayers to keep them in office.

Tack it on as an amendment to an Obamacare repeal vote.

I have no problem with Democrats being taxed exclusively to pay for their own parties. 😉

My thoughts exactly – the Clintons could afford this personally, and could really afford it with their foundation. But, of course, having the latter pay would also give us the entertainment value of seeing who is actually paying for the Dem’s convention.

That’s what happens when abolish God from your platform and then call Him back in to tell Him “Get in back!”

You buried the lede:

reversing a change Congress approved just a year ago

This is money that both parties used to receive as a matter of course, and the Ds were counting on it. But the Republican Congress, the “Boehner/McConnell” Congress that commenters here are so fond of lambasting as “useless”, or as in league with 0bama, changed this, and now the Ds are scrambling to try to reverse it. But they haven’t got the numbers; back when it passed they could have stopped it if they’d been willing to invest sufficient political capital, and if they’d got 0bama on board, but now it’s too late. Unless 0bama really goes to bat for them and refuses to sign an appropriations bill that doesn’t include this money, this particular gravy train is staying in the roundhouse.

I’d bet that the funding for their party can be found in the $1,100,000,000,000 budget the Republicans just passed…after all, Ex-Im Bank was ‘killed’ but is now back in operation thanks to the GOPe.

As far as I am concerned, taxpayers can and should pay for this Convention. Democrats. Voluntarily.

Obama has been campaigning in “deep” pockets for his entire administration at the expense of the tax payer. Where have those funds been deposited?

Where have those funds been deposited?

Well, to be fair, most of their money already does come in the form of Congressional appropriations, directly or indirectly. How many left-wing lobbies and NGOs are funded by the taxpayer? How much money does SEIU get directly out of the paychecks of even right-wing federal employees?

Do not just stop funding Planned Parenthood and all those others you mention… defund all charities and NGOs. They are a luxury that we cannot afford. Stop these slush funds.

Stealing from the children? How low will dems go?
#childrens/lives/only/matter/when/dems/need/to/dupe/the/public
From the link:

The move comes from DNC Chairwoman and Florida Rep. Debbie Wasserman Schultz, just one year after Congress voted to redirect previous convention funding to the research of childhood diseases.

The Republicans are meeting today about the latest Continuing Resolution [called the “taxibus] that they are passing instead of the “normal order” they promised. They do not want to release the details until after the debate tonight, which makes me worried. Reports are that the Democrats get everything they want 100% funded and no restrictions on Refug-Jihadi’s. Republicans may get lifting the oil export ban.

I’m guessing that the Democrat convention funding is in there somewhere.

What the h*ll do they need a convention for? Is there anyone not named Hillary that might be nominated?

I think they should opt for using the “go to meeting” app.

Or else let the all-leftist-all-the-time media buddies comp it.

Shouldn’t that headline have “unexpectedly” in it somewhere?

George Soros, Bill Gates, and the usual suspects are too busy buying elections to pay for this.

Colorado has a fellow, his name escapes me, but made millions and millions on computer stuff. He is a homosexual and has a partner and is interested in the legalization of gay marriage. So for years he had his people monitor legislative elections in Iowa. Anytime a candidate mentioned they were against same-sex marriage he would send between $500 and $2500 their way, towards the end of the campaign, when fresh cash was really needed. When the Iowa Supreme Court came out in favor of same-sex marriage, no one in the Legislature blinked. His name has been scrubbed from Wikipedia. That’s how real liberals spend their money. Getting taxpayers to foot the bill is just icing on the cake.

Since the Democrats are the real party of the rich, how can they not have money to pay for their convention?

“Since the Democrats are the real party of the rich, how can they not have money to pay for their convention?”

One of the reasons they are rich is they get other people to foot the bill. Think ‘corporate welfare’. Recently the most profitable division at General Electric was the tax-avoidance division. Remember that, and crony capitalism, the next time you buy an expensive compact fluorescent bulb.

What’s the point of even having a convention? Just hand the scepter to Cankles and let’s start voting against her…

Does no one remember the $20 million loan Duke energy gave the dems last time in Charlotte? You know, the one that wasn’t paid back?

I have a hard time understanding why the Dems are short money. When Tyrant Obama the Liar extorted billions of dollars from BofA he gave nearly a billion dollars to Dem front organizations. I was sure that this was done with their promise to fund Dem campaign coffers with hundreds of millions of dollars. Maybe it will be used as soft money to buy up all the TV and radio advertising time for Dem ads.

just tell the Democrats that they and Obama have spent so much money over the last 7 years, that we simply cannot afford any more spending. Too bad, so sad.