Callista Gingrich Chats With Us About Her New Book, Christmas in America

Callista Gingrich Chats With Us About Her New Book, Christmas in America

And her favorite Christmas traditions 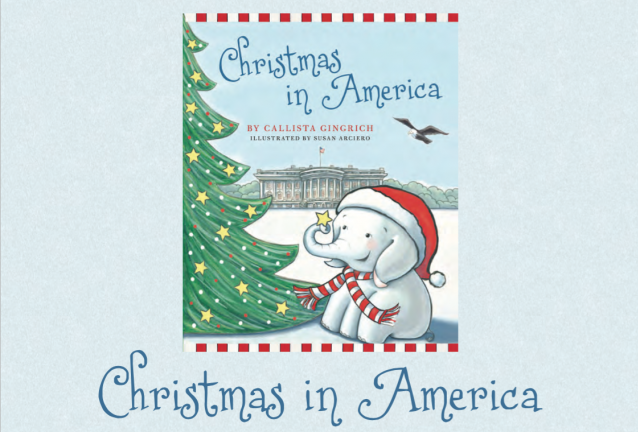 Callista Gingrich’s fifth children’s book is one you’ll want to pick up. Ellis the adorable little elephant journeys through the past, stoping to explore the history of Christmas in America.

Far from the watered-down historical fare, Christmas in America serves meaty historical events delicately enough to be palatable to youngsters, but rich enough for readers of any age. So enjoyable were some of the historical specifics, that I found myself geeking out, excited to reread a few of my favorite stories.

If your American history knowledge has collected a little dust over the years, fear not. Christmas in America is equipped with a handy guide in the back of the book to bring you up to speed.

First, a bit about you:

Kemberlee: What is your most treasured Christmas memory?

Callista: Growing up in Whitehall, Wisconsin, I loved going to Christmas Eve Mass with my parents at St. John’s Catholic Church. When we came home from Mass, we would watch a televised replay of the Pope celebrating Mass at St. Peter’s in Rome. I loved how our small parish was connected to the larger church.

K: Everyone has a Christmas song they love and one they dream of banning from radio play for all eternity. What’s the Christmas song you love most and the one you would be happy never hearing again?

C: I really enjoy the classic Christmas carols. Silent Night remains one of my favorite carols of the season. I’m not such a big fan of Grandma Got Run Over by a Reindeer 🙂

C: Every Christmas, I look forward to performing with my choir and band.

I have been a member of the Choir of the Basilica of the National Shrine of the Immaculate conception for 20 years. Our Christmas schedule features beautiful performances that require a great deal of rehearsal. In addition to our Christmas concert in early December, we sing throughout Advent, on Christmas Eve and Christmas Day. As a lifelong Catholic and a musician, it’s a very rewarding experience.

I have also been a member of the City of Fairfax Band in Fairfax, Virginia for 26 years, playing French horn in the band. Our annual Christmas Concert (sponsored by the Gingrich Foundation) is a beautiful gift to the community and a highlight of the Christmas season.

And to the point, Christmas in America:

K: Ellis the Elephant is one lucky pachyderm, getting to travel through time across the rich spectrum of American history. Is there an era or event that interests you most?

C: Throughout the Ellis the Elephant series, Ellis explores the pivotal moments that have shaped our nation. American history is filled with interesting stories and fascinating characters. My favorite historical period would be the American Revolution. It’s a time when our Founding Fathers established the framework of freedom.

K: What inspired Ellis the Elephant as a vehicle for teaching American history?

C: My talented illustrator, Susan Arciero, and I knew we needed a unique character to capture the interest of small children. We considered many animals to guide young people through American history, including bunnies, hippos, and giraffes. But in the end we could not resist this adorable little elephant – Ellis the Elephant.

K: Writing a book that incorporates two separate tradition lines (American history and American Christmas pastimes) was a tall order, but Christmas in America does both and well. With so much history and an overwhelming number of events to pick from, how did you go about narrowing down the final selection?

C: When I first began considering a book about Christmas in America, I was surprised by the many fascinating stories and traditions associated with the holiday throughout our nation’s history. Christmas has been a part of American culture from the very beginning. In fact the Jamestown settlers celebrated Christmas aboard their boats on their way to the New World in 1606. American colonists celebrated Christmas much like we do today. The holiday was a time of joy and celebration marking the birth of Jesus Christ.

Amazing historical moments have occurred on Christmas and I wanted to highlight some of these. For example, in 1776 George Washington crossed the Delaware with the Continental Army to attack the Hessians at Trenton on Christmas night — perhaps the most consequential Christmas in American history. In 1923 President Coolidge lit the first national Christmas tree on the White House lawn on Christmas Eve. In 1968 astronauts first orbited the moon on Christmas Eve, and read fro45m the book of Genesis on a television broadcast. Given the brevity of a children’s book, I tried to select events that represented a broad range of celebrations, periods, and personalities in American history.

K: Christmas in America includes a fabulous resource section in the back of the book. Is it your hope that the adults will learn something from Ellis’ exploits too?

C: My mom is in her eighties, and she’s a big fan of Ellis the Elephant. She likes to say that the books are great for readers ages four to eighty. I do hope that adults will learn something from Ellis, too. I’ve certainly learned new things researching and writing these books!

K: Are any of your favorite bits of American history or Christmas tradition embedded in Christmas in America?

C: There are so many different Christmas traditions in the book, and some of them may seem a bit strange to us today. (The Civil War soldiers who hung dry salted meats on their trees would be just one example.) But some things have remained the same throughout our history: Colonial Americans celebrated Christmas with family and friends as we do today.

Of all the Christmas traditions, it was most important to me to include a nativity scene in Christmas in America (featured in my verse about Christmas on the frontier), because the nativity scene reminds us of the true focus of Christmas – the birth of Jesus Christ.

Christmas in America is a lovely way to share American exceptionalism with our future leaders. You can order it here.

Get her to tell the tale about the woman who took another woman’s husband and wrecked his marriage. It’s a doozy of a fairy tale.

Once upon a time, not long ago…

He also saw a skull floating upon the water. Said he to it: Because you drowned others, you were drowned; and those who drowned you, will themselves be drowned. (Avot 2:6)

What goes around comes around (Justin Timberlake)

My point, in case you didn’t notice, was that Marianne is in no position to complain about Callista, and deserves no sympathy for what Callista did to her.

If you disagree, please explain why. In what way did Callista wrong Marianne?