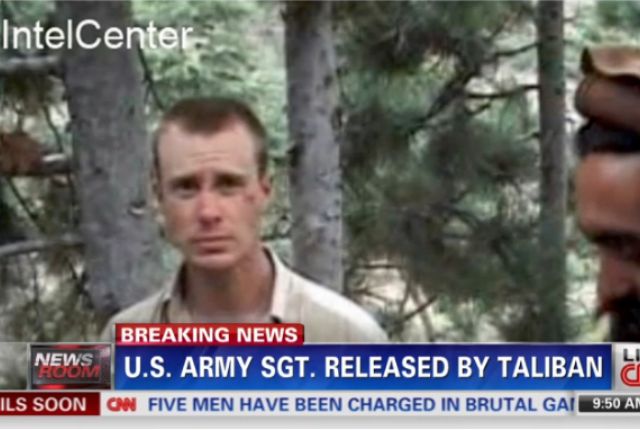 Bowe Bergdahl, who reportedly left his post to go look for al Queda, was charged with desertion and misbehavior before the enemy.  Today, it was announced that Bergdahl will face a court martial and a possible life sentence.

Gen. Robert Abrams, the commander of U.S. Army Forces Command, ordered the court-martial on Monday, breaking with the U.S. military officer overseeing Bergdahl’s preliminary hearing who recommended that Bergdahl be referred to a special court-martial and face no jail time.

Abrams on Monday ordered Bergdahl’s case to a general court-martial, which means Bergdahl could face life imprisonment if convicted of “misbehavior before the enemy by endangering the safety of a command, unit or place.”

As you know, Bergdahl was traded for five top Taliban terrorists, and Obama attempted to create a “hero’s return” moment in announcing his release in the Rose Garden with Bergdahl’s parents present, in a move that was deeply unpopular: 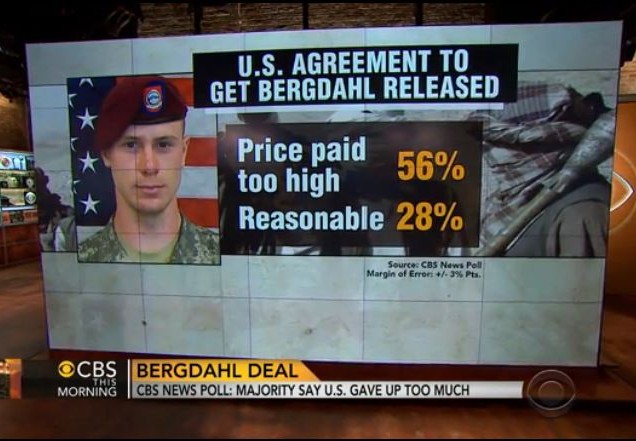 Megyn Kelly interviewed several soldiers who served with Bergdahl and were present when Bergdahl decided to walk off post.

It’s been reported that an unknown number of soldiers died, in part, because of the search for Bergdahl.

Then he deserves as nice, new rope.

Along with his traitor CiC.

he was charged with article 99 and the lessor included charge of article 85.
99 is a death penalty charge if desired yet nobody reports this.
85 is also a DP but only in time of war and depends on formal declaration of war. so nobody charged under 85 executed since WW2

1. An authorization for the president to use military force against an enemy is a declaration of war. There are no magic words that a declaration must include.

2. In any case, where in 85 did you see a need for a formal declaration? All it says is “in time of war”, and that doesn’t require a declaration of any kind. For instance the USA’s first war was the Quasi-War against France in the 1790s; neither side declared this war, but the courts recognised that a legal state of war existed. Also, in the Prize cases of the 1860s, the courts recognised that the Civil War began on the day the first shots were fired, not on the day that Congress declared war.

multiple years of being an mp and actually using the ucmj against people including article 85 charges.
sure you want to go toe to toe with me on this?

Yes I will go toe to toe with you.

read the actual charges and requirements for the articles

Unless there is a death penalty actively contemplated, and given this administration that is doubtful, the most powerful charge would be article 86 Absent without leave

Any member of the armed forces who, without authority–

shall be punished as a court-martial may direct.

This is a powerful charge as it is simple to prove with existing records such as roll calls, formations, guard rosters etc. There are plenty of his peers and senior NCO’s who have already publicly stated his absence was noted AT THE TIME.

– was he there?
– was he supposed to be somewhere and knew it?
– did he get approval from someone in authority to not be there?

These questions can be answered and PROVED in seconds. It generally takes longer to make sure that the individual knows his rights. When I ran summary court martials, I would NOT let anyone plead guilty to article 86 as it would take longer.

Then the sentencing at a general court martial can be
– reduction in grade to pvt, E-1
– forfeiture of all pay and allowances
– confinement at hard labor for life
– dishonorable discharge

Do you really think a general of this dude’s stature would go up against the CiC, even if the CiC is a pansy, unless he has his sh!t together?

You do realize that he didn’t miss a formation on base, right? He left his post unmanned in a combat zone. The only thing you have proven so far is that you have no clue how the UCMJ works while in the field.

Nonresponsive. I don’t care how many years you were an MP or using the UCMJ; no amount of time doing that gives you any authority to change it or insert requirements that aren’t there. All it means is that for all those years you were either ignorantly or deliberately distorting it. If you claim that some sort of declaration of war is required, show me the language in 85 that requires it. And if you claim that there was no declaration of war in Afghanistan, then you’re flat-out wrong, and nothing you can say can make you right.

About f’n time this pogue faces real charges for his self-centered, delusional stupidity.

I’m thinking that there are still people in our Army who just resent being pissed on by Collectivists.

I know I’m tired of seeing it done…

Bingo, Obumbles hasn’t succeeded in getting rid of all of the real soldiers yet.

Whoever, was the preliminary hearing officer for this was obviously an Obama style officer, not to mention a damn disgrace.

I’m not too surprised. His dad was Gen. Creighton Abrams.

Yes, thank God there are still a few real men left in the military after Obama’s purges.

General Robert Abrams undoubtedly faced intense pressure (and likely more than a few threats) from the White House, yet he did the right thing anyway.

Bergdahl the Taliban buttboy. The man who ran away to the Taliban to protest against his company, allegedly. Bergdahl, the man who took a picture with a huge Afghani’s arm protectively around his shoulder while Bergdahl looks out like a tentatively smiling wife.

Swift trial and a rope. Put his dad and his CiC on trial too and let them share Bergdahl’s fate.

Serious question: is the Commander in Chief subject to the UCMJ?

Insufficiently Sensitive in reply to ugottabekiddinme. | December 14, 2015 at 8:26 pm

Probably not. He’s a civilian, despite his CIC powers.

As a guy who spent 22 years on active duty, the only thing that sums it all up for me is this:

Bet no one but Fox News and talk radio to cover the details of the trial. They are too invested in keeping Obama’s legacy intact.

Geez, I wish this could parlay into a military coup. Banish the SOB to his relatives living in the mean huts and sewers of Nairobi…or our military firing squad for treason.

Why not just ship them down to Gitmo?

If there is any justice left in the world this filth would spend the rest of his life in beautiful Ft. Leavenworth, spending fun filled days turning big rocks into small rocks with a very small hammer.

They why his “exchange” should have gone down, because you know they set it up for a photo op, actually doing the walk across at the same time thing. Picture it a open area in the toilet called Afghanistan, a Black hawk lands across the space from a group of pot bellied pig boinking savages. The chopper disgorges 5 more pot bellied pig boinking savages while a single “prisoner” is brought forward. They begin to walk to their respective sides. (Now here is how it should have ended.) As they reach the half way point 6 shots ring out dropping the 5 savages and the worthless deserter in their tracks. Then about 1 second later as the black hawk does a tactical dust off a couple of Hellfire Missiles streak in and obliterate the pot bellied pig boinking savages that brought the deserter home.

Closing scene is the Blackhawk picking up the 3 concealed snipers and then everyone on the chopper grinning as it flies off into the sunset.

The real story here is less about Bergdahl and more about the interaction between Obama and the military. Clearly, Obama has a vested interest in this case for it reflects back on his decision to trade top level Taliban for Bergdahl which then goes on to make a statement about his ability to lead and make sound decisions. Obama pressured the initial General to recommend minor charges against Bergdahl because it would make the trade somewhat justified. Instead, the Army has decided to throw the book at Bergdahl and, in doing so, they are telling Obama to pound sand. This is nothing more than a blatant statement by the Army that they have no confidence in Obama and will not be manipulated by him. It is essentially a declaration of war between the military and Obama’s leadership.

I am wondering if the court martial will even be able to happen before Obama is out of office. I know the military justice system is a bit faster than the civilian one, but I don’t know if it is that fast.

Also, don’t discount the point that Obama my even be in on this. If there is one thing that he has proven is that about the only people he won’t throw under the bus are is family, so I would not be surprised if he has decided let Bergdahl go down as some kind of tactical decision.

I wonder if Tyrant Obama Bin Liar will give Bergdahl a pardon? He could lie and claim that he had suffered enough from the 5 years or so as a Taliban prisoner. That would have the effect of justifying, in the mind of idiots, the trade to “save” Bergdahl.

Now, if only the GOP would find some cajones.

Oh, forget getting them back, just send in the operators “deal with them”. We have been trying to fight PC “humane” political wars for to long. This is the same crap that had us dropping tons of ordinance on the same rope bridge over and over in Vietnam and calling it “disrupting supply lines”. Its the same crap that kept us from bombing “mosques” even though we knew that’s where the weapons were stored that were being used against our soldiers.

For those that would argue that 5 more will just take their place, the answer is simple; then you kill them to and you keep killing them until there aren’t enough left to make a problem or they get the point.