No punitive discharge, either 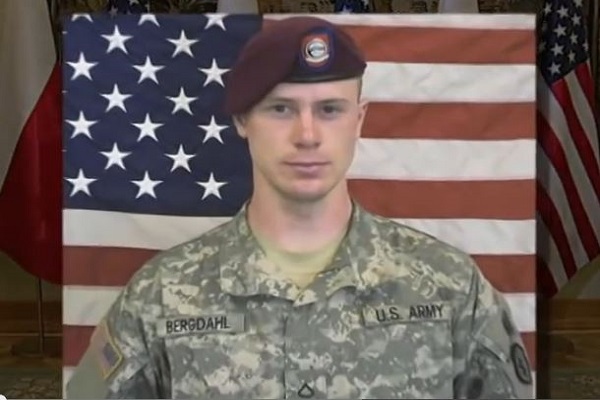 Earlier this year, we covered the charges that Bowe Bergdahl faced; these included desertion and misbehavior before the enemy.  He was facing a possible dishonorable discharge and life in prison.  Amy wrote at the time:

Last year, the United States released 5 high-profile al Qaeda commandos from the Guantanamo Bay detention facilities in exchange for the release Sgt. Bowe Bergdahl. Bergdahl was captured by militants after he allegedly deserted his base in Paktika province in eastern Afghanistan. The exchange embroiled the Obama Administration in scandal—why did we trade dangerous prisoners for the freedom of a deserter?—and the public quickly began to demand answers about what consequences should and would rain down on Bergdahl’s head.

You may recall the outrageous pomp and circumstance with which Obama shared the news of this swap with the American people (despite knowing at the time, as General McChrystal later revealed, that Bergdahl was a deserter):

Even after it was revealed that Bergdahl was a deserter (at best), Obama continued to defend his decision to trade five top Taliban leaders for him, saying “we leave no soldier behind.”

In light of Obama’s failed attempt to curry public favor and present Bergdahl’s homecoming as that of a hero, it may not be surprising that reports are now being released that the military officer in charge of Bergdahl’s hearing has recommended he not receive any jail time at all nor a punitive discharge.

The U.S. military officer in charge of last month’s hearing for Army Sgt. Bowe Bergdahl has recommended he not do any jail time, Bergdahl’s legal team says.

In a memorandum dated Friday, the legal team said it agreed with Lt. Col. Mark Visger’s conclusion that their client be referred to a special court-martial and receive neither jail time nor a punitive discharge.

The recommendation, which hasn’t been announced publicly by the U.S. military, is a significant development for Bergdahl, who in March was charged with desertion and misbehavior before the enemy.

“The case still has to go up to command where another decision will be made whether to accept that recommendation,” he said.

“The U.S. military officer in charge of last month’s hearing for Army Sgt. Bowe Bergdahl has recommended he not do any jail time, Bergdahl’s legal team says.

In a memorandum dated Friday, the legal team said it agreed with Lt. Col. Mark Visger’s conclusion that their client be referred to a special court-martial and receive neither jail time nor a punitive discharge.”

The ONLY source for this story is Bergdahl’s lawyer at this point.

If true, this would be consistent with the Obamic demolition of the Army, and the emasculation of the officer corp.

Every Army vet should get medieval on their Congresscritters over this. Have them lean on the brass hats. Bergdahl got people kill and maimed…at least.

Lt. Colonel Mark Visger has abandoned his Comrades, his Country and his Honor – to advance his career. He has chosen the Easy Lie over the Difficult Truth. He is neither an officer nor a gentleman.

All that MAY be true.

OTOH, the ONLY account we have comes from the deserter’s lawyer, who could be lying through his teeth for the purpose of battlefield prep.

Bowe Bergdahl is the quintessential American fighting man as far as this Administration is concerned. A genuine hero who spoke “truth to power”. I would not be surprised to see him receive the Medal of Honor.

Hopefully this recommendation will be rejected after a brief review by command! Bergdahl does not deserve to get off lightly at all for his actions!

Bergdahl’s lawyer wants leniency due to Bergdahl’s time spent in captivity. But, Bergdahl deserted his post and was captured. Men were killed seeking him out

No leniency. No special court martial. No way.

And what are the 5 Taliban mujaheddin up to now that a year has passed? I really don’t want to know but it wouldn’t surprise me if they were trekking into Europe as I type…

I cannot overemphasize the degree of contempt that I hold for this administration and the damage that it’s done to this nation. As one who served many years ago, every scintilla of credibility has been discarded including the UCMJ by which all are governed in the military services by this case.

We have indeed lost our way…

For once I sorta agree with Administration officials: Bergdahl should not do any jail time.

I think he should be stood up against a wall and shot.

He’s not worth the bullet and rope is reusable. So we cold make Bradley Manning our next contestant, I would even let him wear his dress and wig.

Wow. I see a huge promotion in the future for Lt. Col. Mark Visger. Surely the Obama Administration will reward him for saving the President’s ass, trading 5 Taliban commanders for a “deserter.”

I’m with Trump, execute the traitor!

Um, guys? Chill the heck out. Please note that the claims made came from Bergdahl’s attorneys, not the Army.

From Jonn Lilyea at This Ain’t Hell:

Lieutenant Colonel Mark Visger, the officer who presided over the Article 32 hearing last month, has recommended a Special Court Martial for the special snowflake. A special court martial could result in 12 months confinement, forfeiture of two-thirds of his pay for 12 months, reduction to private E-1 and a Bad Conduct Discharge (known colloquially as a Big Chicken Dinner).

You write as if you think those maximum punishments would be adequate.

“A special court-martial is the intermediate court level. It consists of a military judge, trial counsel (prosecutor), defense counsel, and a minimum of three officers sitting as a panel of court members or jury. An enlisted accused may request a court composed of at least one-third enlisted personnel. An accused may also request trial by judge alone. Regardless of the offenses involved, a special court-martial sentence is limited to no more than forfeiture of two-thirds basic pay per month for one year, and additionally for enlisted personnel, one year confinement (or a lesser amount if the offenses have a lower maximum), and/or a bad-conduct discharge.”
If the Review Officer wanted him to skate, he would have recommended either Article 15 or Summary Court.

Or is it much more likely that he gave up info voluntarily in order to preserve his life?

I’ll take the latter. Time to shoot him.

they HAVE to prosecute, convict and punish this traitor: if they don’t you’re never going to be able to punish any other GI for AWOL.

“Your honor: You want to give my client a BCD, when all he did was shack up with his girlfriend instead of going on the field exercise, and Bergdahl deserted to the enemy? That’s disparate punishment…”

Bergdahl didn’t desert, he defected. He actively sought refuge with the enemy. The maximum punishment of a special court martial is not nearly enough for this coward.

Who knows… Maybe someone will kill him on the street.

I’m willing to withhold judgement. But judgement is necessary.

I don’t see why Bergdahl shouldn’t be spared jail time when Jenkins wasn’t.

“…the ONLY account we have comes from the deserter’s lawyer, who could be lying through his teeth for the purpose of battlefield prep.”

I’m not disputing that, Ragspierre, so I’m not looking for an argument on this front. I am saying I will be greatly interested in how this plays out. As in, loyalty and trust. Is it a two way street?

I was raised in a certain ethic, which apparently no longer exists, where both ran down as well as up the chain of command.

Now I’m dreading the future where everyone gets a “participation prize.” Bo Bergdahl, who walks off post. The great unwashed “bitter clingers” who stuck around and did their duty. Same thing.