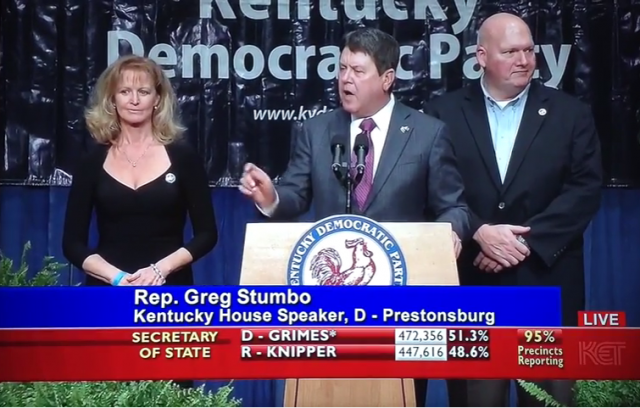 Few news stories have brought me more joy recently than reading about the Republican Tea Party activist, Matt Bevin, and his unanticipated win in the Kentucky gubernatorial race.

However, the cherry on top of this Schadenfreude sundae has got to be Kentucky House Speaker Greg Stumbo’s entertaining election night sermon (hat-tip, Victory Girls).

The rant was rich in biblical references. At one point, Stumbo actually says, “We can’t let them [Republicans] make people believe we are not Godly people”. Personally, I think the booing that occurred during the 2012 Democratic Party convention when “God” was inserted into the platform is a more likely root cause for that particular belief.

Interestingly, Bevin’s win is partially attributable to voter unhappiness with the Affordable Care Act…which shows that the Tea Party is more robustly alive than Obamacare.

The Kentucky win was only one of many solid wins for conservative principles this November.

The Republicans in Virginia held on to the state senate by handily winning a key contest.

Republican state Sen. Frank Wagner defeated Democrat Gary McCollum Tuesday in a state Senate contest that Republicans needed to help keep control of the upper chamber.
…The State Senate Race between Wagner and McCollum was one of the three most costly Senate races in Virginia. Wagner beat McCollum by 54 percent to 46 percent for the seat in Senate.

Houston voters rejected a “nondiscrimination” ordinance by a wide margin:

Houston voters rejected on Tuesday an LGBT-inclusive non-discrimination ordinance in their city by a wide margin, dashing the hopes of LGBT rights supporters after a chain of victories on same-sex marriage.

The Associated Press and other media outlets called the race a couple hours after polls closed in Houston at 7 p.m. Central Time. Houston residents cast their votes on the Houston Equal Rights Ordinance, which came to them on the ballot as Proposition 1.

According to the unofficial report from Harris County, the numbers were 39 percent “yes” and 61 percent “no” with 100 percent of precincts reporting in a low turnout election.

I suspect many voters recalled the LGBT-bullying of small pizza joints, bakeries and flower shops owned by hard-working Christians. Perhaps those who want nondiscrimination rules shouldn’t practice discrimination next time?

Plans to legalize marijuana in Ohio went up in smoke…in part because of marijuana activists.

The sheer size of Tuesday’s crushing electoral defeat of marijuana legalization in the Buckeye State surprised political experts inside and out of Ohio. Despite a $20 million campaign, the proposed constitutional amendment, known as Issue 3, lost. Amid its smoking wreckage, six reasons emerge to explain what happened to Issue 3 — and what happens next.

…Marijuana activists always squabble over legalization initiatives. One reason that a 2010 proposition lost in California was because the marijuana farmers in the state’s “emerald triangle” voted it down by 70%. Marijuana activists in Ohio were almost uniformly opposed to the measure. Many of them have been fighting The Man on marijuana for years, and the prospect of wealthy investors suddenly swooping down to throw money at the issue and then cashing in on the Green Rush was galling.

And while this election night may be quickly forgotten in the excitement over the 2016 vote, the taste of the sweet schadenfreude may linger long enough to inspire even more enthusiastic efforts by conservatives over the next 12 months.

Perhaps then we can look forward to a banana-split serving size of schadenfreude?

While Greg Stumbo is poking around in the Bible, he might like to double-check the story about Joseph and Mary. No where in the scripture does it say, or even hint, that Mary was riding on a donkey on the journey to Bethlehem.

Interesting list of beliefs for someone who claims to be a Christian:
“…that this wealth accumulation in America must cease..”
So…Thou Shalt Covet?

This guy is Speaker of the Kentucky House of Representatives? Oh my. I thought we had pretty dumb politicians?

This Stumbo is sure a Dumbo.

It was 1976. My third grade class was just starting to learn about our system of government and the teacher thought it would be a great learning opportunity for us to prepare a short report on who should be elected president (Ford or Carter) and why.

The pro-Carter argument that stuck in my mind boiled down to, Carter is a peanut farmer, so if you like peanut butter you should be for him becoming president.

That argument made more sense than what I just saw in the video embedded above.

It is over when I say it is over…with a Tea Party vote.

Holy Moly! “I’m gonna admit that I have not read the holy book from front to finish like some of you probably have.” So, now you’re gonna tell us, Joe, what it says and after the fact? Those who read the Holy Book “probably” voted your kind outta here.

Obama believes in bringing the middle class dream to every American? Whoa hyperbole of Progressive Holy Book hubris! Obama via his Marxist fiscal and monetary policies (yes, he controls Yellen) has turned dream to nightmare for most people including Kentuckians, hence a new non-Democrat non-Progressive governor. There is no money (wealth) in savings accounts because the FED has created zero interest policies that keep folks from saving. The economics of Keynesians is to have government and people spend all their money (consume) to make an economy grow. This bogus nonsense, the AGW scientism of economics, is exactly opposite of what is needed.

Jesus is an independent.

I expect in short order, the courts will nullify the Texas voting result. After all that is the main way liberals/leftists/socialists/democrats get their ideas put into law.

A lady jockey on an Arkansas Traveler? OMG, that’s funny!

Here is the bit that nobody really picked up on in the houston “HERO” ordinance bruhaha. The ordinance was modelled after a similar state law in California. that law has been the subject of abuse by a subset of professional victims who go around looking for any little thing they can use as the basis of a civil rights discrimination in order to hit the legal lottery and blackmail businesses to throw money at them to settle the cases. There is one lawyer in a wheelchair who goes around to every business he can find with a tape measure and measures EVERYTHING in order to try to find something, ANYTHING, that is not ADA compliant in order to file a complaint. To date he has filed HUNDREDS (possibly thousands now) of them and makes quite a living off of his lawfare.

I believe the California handicapped lawyer has been banned from the courts (I forget the legal term).

The video is instructive because it demonstrates how out of touch the DC Democrats are from state level Democrats in every state that isn’t bordered by the Atlantic or Pacific oceans. The Democrat Party has transformed itself into a rump party whose priorities are driven mostly by coastal elites and academic eggheads.

Billionaire environmental zealots pay, er donate to, the Democrat Party to destroy the livelihood of people who get dirty for a living working in coal mines, oil and gas fields, building pipelines, refineries, and even the Teamsters. Those industries are in middle America, so why on earth would anybody even tangentially related to those industries ever vote for a Democrat? It seems to me the Democrat Party burned its bridges to those voters when it decided it liked the big checks written by the billionaire zealots more than it cared about the interests of those voters. Stories are being written now about how the Democrat Party has been gutted and filleted at the state level during Obama’s presidency, losing 900+ seats in state legislatures. Just a disaster.

All I can say is keep up the good work, Obama. Keep pretending it is “discriminatory” to now allow boys and men who like dressing up like woman to expose their genitals to real women in high school locker rooms and public restrooms. I’m sure that’s what people in Peoria, Council Bluffs, Topeka, and Boise want from the Democrat Party.

The reasons that democrats have been losing recently is because they’ve been blaming everyone else for their failures rather than looking in the mirror.

Stumbo looks like the typical pompous ass progressive who are emblematic of the democrat party as denoted by their mascot.

Stumbo should display the humility that the good book teaches and accept that his party’s message sucked.

Hoo, boy. I think somebody was enjoying him some Kentucky bourbon that night.

National level politicians find it much easier to avoid contact with those icky peasants back home, but state and local politicians not so much. I say this not by way of making excuses for them, but can you imagine being a Democrat state or local politician who has to pay obeisance to their national party’s uber-liberal platform nonsense while standing amidst Democrat peasants whose living reality is entirely different and does not reflect the liberal glories shining down from so far above and so far away?

The national Democrat Party is no doubt hearing it big time from the local Democrat apparatchiks. Hopefully, chaos and revolution is on their minds.

“If Jesus was alive” – gives it away, doesn’t it? Believers don’t talk that way about Jesus – Jesus IS alive!

Ohioans smelled that skunk a mile away and said heck no!

Democrat defeat is just so sweet.

“You shall have no other gods before me.” — Barack H. Obama.

This isn’t a meltdown.

Another baby murdering queer marriage champion democrat claiming to be a good Christian.