Expanded to include ban on those accused of “discriminatory acts” 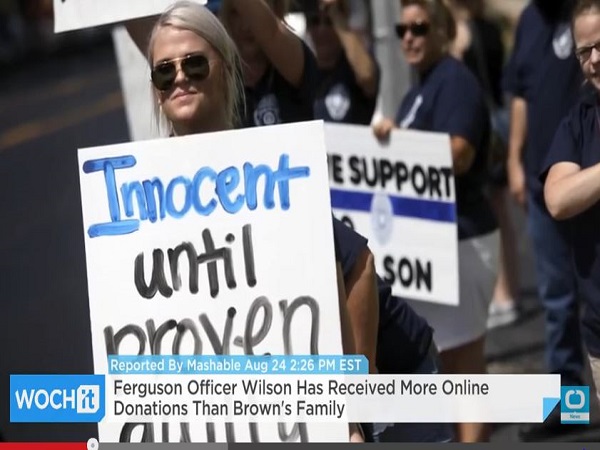 GoFundMe doesn’t actually say Christians and conservatives need not apply, but it’s difficult not to wonder if that is the intent of their policy change.  In the past week, they have shut down the GoFundMe pages of two Christian-owned businesses who declined to participate in same-sex weddings.  HotAir reports:

Last week they shut down fundraising pages for Sweet Cakes by Melissa and Arlene’s Flowers, two Christian-owned businesses facing discrimination charges for declining to provide services to same-sex weddings, and caught hell for it from conservatives online. With good reason. Until this week, GoFundMe banned fundraising “in defense of formal charges of heinous crimes, including violent, hateful, or sexual acts,” but Sweet Cakes and Arlene’s Flowers weren’t accused of crimes. They were accused of violating civil antidiscrimination statutes. Even if they had been accused of crimes, only a truly lunatic supporter of gay marriage would treat politely refusing to bake a wedding cake as on par with the sort of crimes people typically think of as “heinous.”

According to The Washington Times, the change in GoFundMe’s Terms of Service, made after it shut down Sweet Cakes and Arlene’s Flowers, includes the words “discriminatory acts”:

The website quietly expanded its list of banned crowdfunding activities this week shortly after The Washington Times questioned GoFundMe’s reliance on its policy against campaigns in defense of “formal charges of heinous crimes” to pull fundraisers for Arlene’s Flowers and for Sweet Cakes by Melissa.

The new policy, which includes a ban on campaigns in defense of “claims of discriminatory acts,” would appear to make it more difficult to raise money on behalf of businesses facing crippling civil damages awards after refusing to provide services for gay weddings for religious reasons.

Regardless of there being no formal charges filed, the far left was incensed when Indiana’s Memories Pizza garnered over three quarters of a million dollars in GoFundMe donations.

Progressives began their attacks on Memories Pizza online and via the restaurant’s Yelp page, and the threats and vitriol became so intense that the owners felt they needed to close their small family business as a result.  Ultimately, these attacks resulted in contributions from people who sympathized with the owners or otherwise felt they were being unfairly targeted and attacked for their beliefs.

Memories Pizza’s GoFundMe page was not shut down because it was based on a hypothetical question posed to a family member:

The GoFundMe crowdfunding site was used earlier this month to raise more than $842,000 for Memories Pizza owners Crystal and Kevin O’Connor, who said they would not cater a hypothetical same-sex wedding, but the money raised was to support their business and family, not to pay a court award.

“In the case of ‘Memories Pizza,’ no formal charges were involved, thus the campaign was not removed,” said the GoFundMe statement.

As with Memories Pizza, Darren Wilson’s GoFundMe page was very successful, raising more at one point than that for Michael Brown’s family:

An online campaign driven by indignant progressives began and was successful in getting the Darren Wilson support page taken down.

So when Memories Pizza received such astounding support, it wasn’t surprising that they decided to put pressure on GoFundMe with regard to private business owners who choose not to support gay “marriage.”  As HotAir notes,

So GoFundMe had a dilemma. It could either violate its own policy by keeping Sweet Cakes and Arlene’s Flowers off the site despite the fact that no crime had been committed, or it could reinstate the fundraising pages for those businesses and piss off fanatic, boycott-ready gay-rights activists. In the end, they made the smart business decision by finding a third way. They’d change their policy in the name of keeping those pages offline, knowing that it’s safer for a company to cross social conservatives than to cross the left and their media allies on gay issues.

And therein lies the rub.  Crossing Christians and conservatives is “safe” because we don’t respond with the bullying, animated, hate-filled demands and threats of the far left.

Whether we think of it as rising above the fray, turning the other cheek, or just being decent human beings who respect others, we simply don’t react in ways that affect the kind of reaction and change the left demands (and receives).

Gofundme.com is an online business with very close to zero overhead and zero startup costs. (

It has no copyright or patent or trademark on the idea of crowd funding.

If there is a demand for crowd funding of causes or enterprises that Gofundme.com will not host, they are simply creating customers for Fundmetoo.com or Patriotfunders.com or Fundanything.com.

Let’s find the best one, and get behind it. Conservatives and Christians are the people who give money to charity in this country, not the leftists. GoFundMe can go pound sand or cater gay weddings, do not patronize them.

Yes, both examples are silly, because the aggrieved party can find another business to go to, but the same standard should apply across the board.

It took only 40 minutes to get a page for the Baltimore police officers in the Gray case to get yanked.

Samaritan’s Purse took up the cause, I think, for at least one of the cancelled GoFundMe items.

The tools are out there, and anyone can use them. But it is fascinating that since the Chik-Fil-A and Hobby Lobby attacks didn’t pan out, the leftists are now targeting small shops with shallow pockets for their terrorizing version of tolerance.

I looked at the Samaritan’s Purse site and YouTube channel, and it looks great, but I didn’t really have time to dig far enough into it to actually recommend them. Here’s their link for Persecution Against U. S. Christians: http://staging.samaritanspurse.org/article/persecution-against-u-s-christians-on-the-rise/

It seems to incorporate all of the cases listed in this post.

I agree about the shift from big companies to small, family-owned businesses. When the courts didn’t pan out, they decided on plain bullying to get their way. It’s disgraceful.

Need to rename [and constantly refer to] GoFundMe as GoFundDemocrats. Accuracy in advertising.

GoFundMe screwed up big time. I had no idea there were other funding sites out there. Now everyone does.

…..because police are not entitled to the same presumption of innocence as criminals?

They are. What’s that got to do with it? GFM won’t host fundraising for anyone accused of a heinous crime, whether they’re policemen or not.

Really? They are raising bail for accused rioters from Baltimore.

Or is that not a serious crime anymore?

GoFundMe’s policy is not to allow “campaigns in defense of formal charges of heinous crimes”. If you’re aware of a GoFundMe campaign for a rioter who has been formally charged with a heinous crime, then you should report it and see whether they take it down. They may just not be aware of it.

And lo and behold, I just saw that they did in fact pull it, once it was brought to their attention.

I have frequently given through Gofund me but in the future I will abstain and find other ways to give to causes or people.

Many conservatives – myself, my family, and my church included – still believe in this time-honored tradition, and our church and congregation does offer such assistance as we are able and called to provide.

Perhaps not coincidentally, most members of our church believe that the federal government entitlement programs should be severely cut back as unsustainable, and that a huge part of the cultural decay is a direct result of the communities’ collective insistence that the presence of God and the church are neither necessary nor welcome.

Of course, the way I see it, some congregations also deserve some share of the blame due to their utter lack of outreach to their communities, but still….

I was one of many people who gave money to Memories Pizza, the Indiana business that used your site to raise cash. The cash was needed after the business closed temporarily in fear.

Why fear? Because liberal fascists were threatening violence after one of the owners stated that the business would not serve a “gay wedding.” This decision was in deference to Christian teachings — the moral law that made our good life possible.

I gather that Gofundme has come down on the side of the fascists, as if “anti-discimination” were the most important value. Anti-discrimination — liberalism — is not “goodness”; it is undermining our freedom to use our resources as we see fit. The society might make a single exception to protect black people, for historical reasons. In general, we make a space for one another, including for conservative Christians.

Do you want to end all conscience rights? They have been part of Anglo law for hundreds of years. Do you also propose to end conscientious objector status?

Please reconsider your new policy and stand up for America, which was created in part to protect the civil rights of dissenters.

On the assumption that my plea will fall on death ears, I am doing what I can to convince people to avoid using your services, ever.

It seems to me that boycotting GoFundMe and complaining to them (you can do that here: http://www.gofundme.com/mvc.php?route=contact%2Fform ) is appropriate.

I also have a request. I am developing a website for my small group at church. What motivated creating this website was the feeling that we needed something to help us start taking action (such as against GoFundMe), rather than just grumbling about things. If you are interested in helping us out – giving feedback and suggestions about the site – contact me at unshackledweb at yahoo dot com and I will send you the url. Hopefully this site can become a useful tool to help more people get involved.

“Accused”. Not “convicted”. That tells you everything you need to know. Some lib whining that someone did something is enough in and of itself to deny the accused of the resources needed to defend himself against the accusation.

Unpopular and vilified defendants are the ones who need support the most. GoFundMe should go out of business.

If they won’t allow defense funds for cops, then complain about funds for people killed or injured by cops, and those accused of killing cops.

If they won’t allow defense funds for cops, then complain about funds for people killed or injured by cops,

How are these in any way parallel? The victims aren’t accused of doing anything wrong. The cops are.

and those accused of killing cops.

When have they ever allowed such funds?

How are these parallel? The businesses are accused of discrimination; what are the couples accused of?

Sadly GoFundMe isn’t going to have an repercussions unless their feet are held to the fire. I remember when Carbonite banned Rush and the pushback had an immediate impact but I don’t know if it was long term.

Shopping elsewhere would be my choice.

GoFundMe, hypocrites that they are, have their own issues surrounding moral responsibility. For instance, they have been prone to scams and were asked by Forbes about their safeguards to protect the public.

This holier than thou attitude is silly. They are in it for the money (not saying they shouldn’t be). Hit them at the bottom line, that is the best way to push back.