Cause of the crash is uncertain; Putin declares national day of mourning 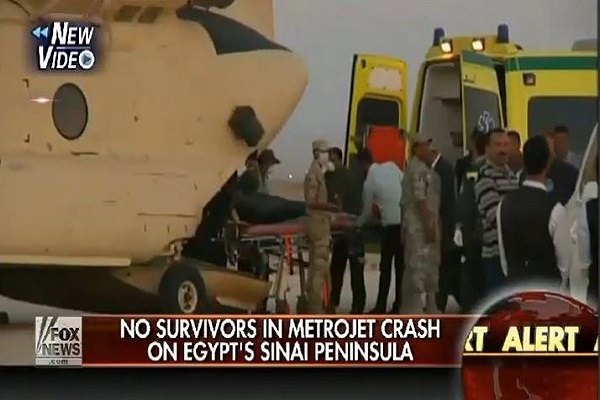 A Russian airliner “broke up in mid-air,” according to the head of Russia’s Air Transport Agency, Aleksandr Neradko, who stated that “all signs attest to the fact that the aircraft disintegrated in the air at a high altitude.”  All 224 people on board were killed.

Russian state media reported that many of the 217 passengers on Kogalymavia Flight 9268 were Russians returning from vacation. The passenger manifest included 17 children but Russian officials said there were 25 aboard. There were seven crew members.

The cause of the crash still is unknown, but it is most likely due to a technical failure, and there is no evidence of any terrorist action, Egyptian Airports Co. chief Adel Al-Mahjoob told CNN Arabic.

Early reports indicated that an ISIS-affiliated terrorist group claimed responsibility for the crash on Twitter, but Russian and Egyptian officials dismissed these claims, stating there is no evidence of terrorism, but there are questions about whether or not the pilot indicated any problems prior to the plane breaking apart.

Russian media outlets said that the pilot reported technical problems and requested a landing at the nearest airport before the plane went missing, but Egyptian authorities disputed that claim.

“There was nothing abnormal before the plane crash,” he said. “It suddenly disappeared from the radar.”

According to the above report, officials have already found the plane’s black box, so answers should be forthcoming.  We’ll keep you posted.

Just for accuracy, it must be noted that all governments, including our own, reflexively declare before there is any knowledge of exactly what happened, or if anything has happened that “it is not terrorism”. Only after time has passed do they admit that they were wrong if proof of terrorism comes out. So take any statements by Russia, Egypt, or the US as being probably false until confirmed by objective reality. None of those governments have any credibility on the subject.

It came apart high up in the sky. One speculation is that the airplane was not perfectly fixed after a 2001 accident – that is, the fuselage had weaknesses.

As much as the reflex is to call this terrorism, we have to remember that airplanes do still just break apart (ex.Aloha Airlines Flight 243) for no apparent reason at the time. This aircraft was too high for the breakup to be the result of a MANPAD, which leave three obvious possibilities: smuggled bomb, large air-defense missile, or accident.

My prayers and condolences to those on board and their families

There was a report that the airline was cutting corners.

Someone should remind Putin that what goes around comes back around.

Vlad’s not waiting for proof: http://www.thegatewaypundit.com/2015/11/breaking-russia-unloads-isis-in-palmyra-region-after-sinai-plane-crash/