Tone deaf? How does it work?

This. This is how it works.

Monday, the RNC sent a round of fundraising emails addressed from failed Presidential Candidate, Senator McCain. 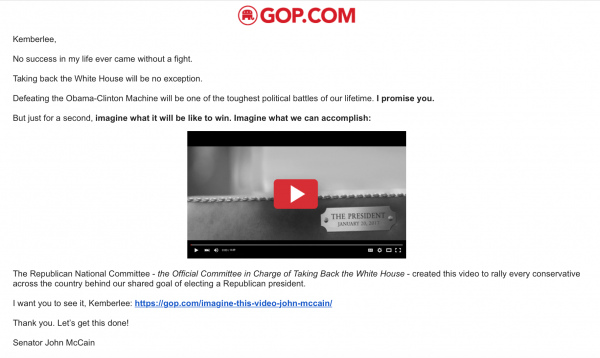 If you want to watch the video, you have to click a link which takes you to an RNC fundraising page. Smooshed over in the corner is the video and a note from Senator McCain.

And so is the note from Senator McCain:

A Note from Senator John McCain:

When I ran for president, I depended on the RNC every step of the way.

I can assure you that our future nominee for president will not win without their help.

The RNC is uniting every Republican across the country behind our shared goal of electing a principled conservative leader to the White House.

I want to win. The RNC wants to win. I trust you do too.

But we won’t unless the RNC has the resources to take on Hillary.

That part is up to you.

Please contribute to the Official Committee in Charge of Taking Back the White House.

But the messenger? REALLY?

I get it, the RNC has to fundraise to pay for all the important things they do like hosting debates with hostile media. I also understand the party must appeal to the entire spectrum of supporters, not just the far right. And yes, I know McCain himself didn’t sit down to pen the above pasted note. But that’s not the point.

Using someone like McCain who not only failed to make it across the White House finish line, but has vocally insulted Republican factions that represent large swaths of the grassroots is about as tone deaf a move as I can imagine. And bonus, it only furthers the notion that the Republican Party “doesn’t listen.”

Thanks to the Opportunist Class, there exist few well-known Republicans who aren’t unnecessarily polarizing to someone. But there are plenty of other somewhat-liked Republicans that could’ve made the same point.

Hopefully, next time the RNC will solicit their help and maybe avoid the dude who called Obamacare opposition “wacko birds“* then suggested the Republican Party ought to literally, go the way of the do-do.

It’s inordinately difficult to sell Party Unity™ when your salesman doesn’t buy his own pitch.

*Still don’t know what a wacko bird is. Still not sure I want to know.

Not trusting a single thing that McCain, Boehner, or McConnell say makes one a wacko bird. I know I’m proud to be one.

Well everybody’s heard about the bird !
Bird bird bird, the bird is the word !

This just goes to show how out of touch Preibus and the RNC are to the Republican members out here. I wouldn’t pi$$ on McCain if he were on fire! And if they think this loser will open our wallets they are dreaming.

Right – and how much have you given to the RNC in the last ten years?

They send out appeals to the people who might actually give them money.

“Right – and how much have you given to the RNC in the last ten years?”

Not one damn penny. Before that quite a bit more than the average person. Right up until the time I realized there was zero, nada, zilch difference in the R party and the dems. As evidence, John McCain.

It’s too soon to objectively state, but in 50 years or so we’ll be able to look back and see when the party of stupid really did jump the shark. Stuff like this demonstrates that it probably already happened.

Note to McLame: Us Hobbits are not that stupid. We are going to fire you too.

The RNC is out of touch, stupid, and delusional. The candidates should definitely sever all ties with them now.

Not at all – they just don’t care. The criminals that occupy our capital have set up a cozy little business. The last thing either side wants is some outsider coming in and killing the Golden Goose.

Hm. Could this be an attempt by the RNC to tap into older moderates who have already retired and are figuring out what to do with their nest eggs?

Another alternative is that the GOPe has decided that if they cannot get their preferred puppet JEB! or Rubio, or other Democrat-clone as the nominee; they intend to deliberately p*ss off the base so that Hillary wins. Because getting a request for money from McCain would surely make me mad.

Makes it an easy choice when they call. Just say “Hell No”

“When I ran for president, I depended on the RNC every step of the way.”

And how well did THAT work out for ya, John? Is the RNC really asking us to throw good money after bad?

I had the same ‘um, welp, okay’ reaction when Jeb! said he was patterning his 2016 campaign after McCain’s 2008 campaign. I was laughing at the screen… um, Jeb? That was a losing campaign.

So far, so good – Jeb’s losing even better than McCain, who at least got the GOP nomination first.

Yeah, but McCain was all but written off at this point in 2007.

Yes, but he rallied and by 2008 he was able to lose mightily in true GOPe fashion. We predict the same for 2016 GOPe pick Jeb Bush.

He was written off permanently in 2008. Perhaps you hadn’t noticed? Cuz conservatives would not vote for the left wing R nominee.

I got it too. When I saw his name I hit delete. Like getting an email from DWS.