On 3, everyone attack Marco Rubio! 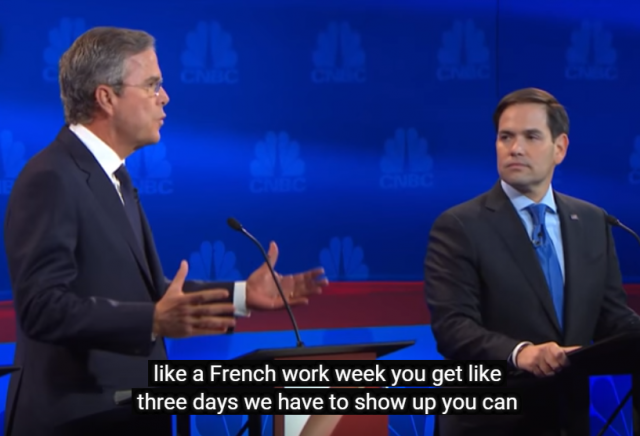 Yesterday, the New York Times reported that serious backers of former Florida Governor Jeb Bush are “seething” thanks to Senator Rubio’s ascension in the polls. So incensed is the Jeb fan club, that they’ve threatened to dump mega bucks into a scorched earth anti-Rubio campaign.

That group, which has raised more than $100 million, has asked voters in New Hampshire how they feel about Mr. Rubio’s skipping important votes in the Senate.

And the group’s chief strategist has boasted of his willingness to spend as much as $20 million to damage Mr. Rubio’s reputation and halt his sudden ascent in the polls, according to three people told of the claim.

Seething with anger and alarmed over Mr. Rubio’s rise, aides to Mr. Bush, the former Florida governor, and his allies are privately threatening a wave of scathing attacks on his former protégé in the coming weeks, in a sign of just how anxious they have become about the state of Mr. Bush’s candidacy.

Their looming problem: In trying to undercut Mr. Rubio as unaccomplished and unprepared, Mr. Bush is a flawed messenger. Over the years he has repeatedly, and sometimes lavishly, praised the younger lawmaker, often on camera.

After Jeb’s ill advised attack on the fellow Floridian during the last GOP Presidential debate, a move that blew up in his face, Rubio released an ad pre-empting any potential rhetorical hit job from Governor Bush. Narrating the ad is Governor Bush himself saying, “I’m a huge Marco fan,” along with other laudatory statements.

Not to be left out of the fight, a pro-Ted Cruz group, Courageous Conservatives PAC, is running an anti-Rubio ad hitting the Senator on his Gang of 8 involvement:

It’s enough to make you think they’re seeing different projections of the state of the race than we are.

Thank you for your support.

Since I have to say this every time I don’t attack JEB, I’m not a supporter since he went to the left. He was a great Governor of my state (IMO) but has since too far too much of a leftward turn. There, that’s over with.

First of all, the SuperPACs aren’t controlled by the candidates. They decide what to do and say. So, sometimes they’re going to say or do things that the candidate does not approve of. We know this. I can’t in all conscious condemn SuperPACs supporting JEB when I’ve excused my candidate in other races for having the same thing happen to him or her. So, my apologetics remain loyal and honest. And not hypocritical. On this point, at least. 😀

Digging a bit deeper in JEB’s campaign, I think several events happening close together give an indication on the Rubio attacks and who was behind them.
1. Before the last debate an outline ‘plan of action’ was leaked. It emphasized a hard hitting attack on Rubio.
2. JEB attacked Rubio in the debate and it was a fiasco.
3. One of JEB’s main campaign people resigned right after the debate.
4. The rest of the ‘plan of action’ was leaked.

What I think happened:
Two campaign managers’ plans of actions competing with each other to get JEB’s attention and approval. The “Attack Rubio Hard” plan of action belonged to the lady campaign manager. She sold it hard, even leaking the outline to push JEB to her way of thinking (or her opponent leaked it to try to stop JEB attacking Rubio). But, JEB trust(ed) her so he went ahead with the attack of his friend Rubio (They truly are normally on good terms.) It backfired, big time so she had to go. Then the rest of the plan was leaked by either her or her opponent, both of whom likely had a copy.

I was expecting to see JEB change his tactics and he did. He’s actually got some decent plans out there and I’d love to see one of the more conservative candidates adopt them after JEB drops out. He’d be great in a Cabinet role IMO.