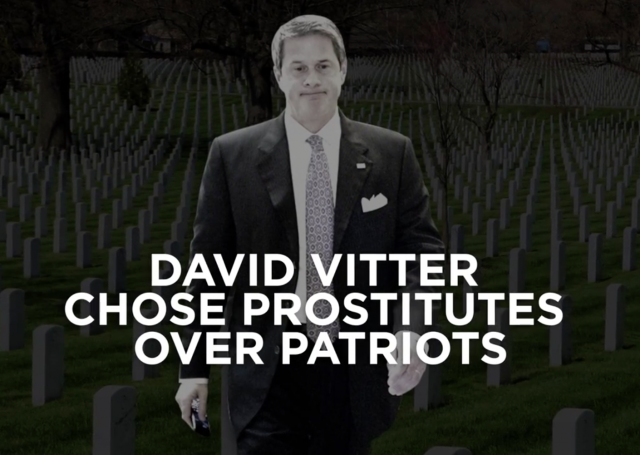 Well, I suppose this is one way to go.

The runoff election, which is scheduled for November 21, will decide Louisiana’s next governor. Republican Vitter made it into the runoff election by the skin of his teeth, only garnering around 23% of the vote with Edwards receiving close to 40%.

Vitter’s less than stellar general election performance is likely due, at least partially, to the public reminder, courtesy of Edwards, that in 2007 Vitter had been shacking up with ladies of the evening.

This video though, alleges Vitter shunned army vets for a tele-rendezvous with a prostitute.

“I asked for and received forgiveness from God and from my wife in confession and marriage counseling,” Vitter said when the scandal first surfaced years ago. Vitter and his family may have made peace with his past, but his Democratic opponents have not. Which is pretty rich given the Democratic Presidential front-runner’s family history.

This is not the first time Louisiana Democrats have used Vitter’s philandering past against him, but it’s probably the nastiest.

“What does X want to talk about? Then list the local hot issues: the lowered scholastic standards the Feds are trying to foist on our children? Unemployment? Infrastructure? The Budget? NO! X is spending the hard-earned money of his supporters on gossip. Not just gossip, of course, but old gossip.

If you’re interested in having someone in office who is actually interested in the public issues of the day, visit my website, and see if we don’t have a lot of common ground.”

‘Course, that website had better have lots of position papers.

This is a great ad. Sen. Vitter is damaged goods. His opponent needs 10% extra vets while he needs some 26% of the vote to win. I don’t live in Louisiana but being a “pro family” Republican while cheating on your wife with a prostitute is hard to overcome.

Yep, old saying “you reap what you sow” comes to mind.

Vitter ought to have resigned his Senate seat and retired, but I can understand him not doing so, even if I don’t support that decision. Democrats never do. Gerry Studds was caught having sex with underage male congressional pages, Mel Reynolds was banging a 16 year old girl, Bill Jefferson (LA) was caught on tape taking a bribe and kept the cash in his freezer and even diverted the National Guard during the Katrina emergency so he could retrieve it from his flooded home.

Louisiana has a long history of corrupt Governors. Vitter is no Bobby Jindal, but he is far from the worst and will be ten times better than the Democrat. And he will win handily, although by less than most Republicans would now that we’ve taken the state.