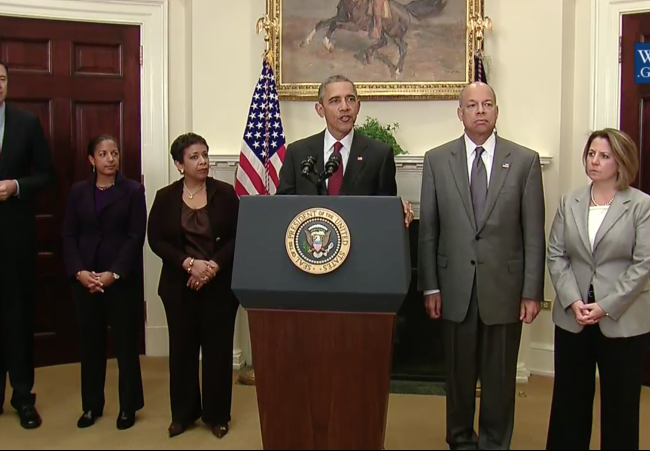 Flanked by members of the national security team Wednesday, President Obama briefly addressed the current state of homeland security. The President assured the American people that, “no specific and credible,” intelligence indicated a looming, “attack on the homeland” for the upcoming Thanksgiving weekend.

For the first time in weeks, Republicans and their alleged terrorist abetting were not central to the President’s public comments.

Current information suggests that ISIL (aka Da’esh), al-Qa’ida, Boko Haram, and other terrorist groups continue to plan terrorist attacks in multiple regions. These attacks may employ a wide variety of tactics, using conventional and non-conventional weapons and targeting both official and private interests.

Authorities believe the likelihood of terror attacks will continue as members of ISIL/Da’esh return from Syria and Iraq. Additionally, there is a continuing threat from unaffiliated persons planning attacks inspired by major terrorist organizations but conducted on an individual basis. Extremists have targeted large sporting events, theatres, open markets, and aviation services. In the past year, there have been multiple attacks in France, Nigeria, Denmark, Turkey, and Mali. ISIL/Da’esh has claimed responsibility for the bombing of a Russian airliner in Egypt.

U.S. citizens should exercise vigilance when in public places or using transportation. Be aware of immediate surroundings and avoid large crowds or crowded places. Exercise particular caution during the holiday season and at holiday festivals or events.

In his remarks Wednesday, President Obama sought to allay any fears that international threats were applicable domestically:

“For many of us, the events there [Paris] touched a deep chord, given the connection between the United States and France. The degree to which Americans see in Paris a way of life that’s so familiar to us. Given the shocking images, I know that Americans have been asking one another whether it’s safe here. Whether it’s safe to fly, or gather. I know that families have discussed their fears about the threat of terrorism over the dinner table; many for the first time since September 11.

It’s understandable that people worry something similar could happen here. Watching the events in Paris made the threat feel closer to home. So as we go into Thanksgiving weekend, what I want the American people to know is that we are taking every possible step to keep our homeland safe.”

The President then sought to dispel widespread criticism that his administration has no coherent strategy to combat ISIS, or Daesh. Roll Call writes:

That includes, “going after ISIL wherever it hides,” he said, using one of several acronyms for the terror group.

The commander in chief pointed to the 8,000 strikes U.S. and other coalition aircraft have carried out on ISIS targets as an example of taking the fight to the violent extremist group. He also said the coalition has driven ISIS from territory it held in Iraq and Syria and killed some of its top leaders.

“Our countries are going to step up that coordination even further, and do more of that work even further,” Obama said, referring to increased U.S. assistance of French airstrikes since the Paris attacks. “We’re stepping up the pressure on ISIL where it lives. And we will not let up.”

And by “every possible step” I mean “besides anything that might actually work”, such as securing the borders, deporting illegal aliens, and enforcing existing laws.

Actually, we’re now given to understand that Obama is ordering all airconditioners to be set at no higher than 50 degrees to offset the climate change heat wave!

We’ll be safe! No terrorist will attack us now!

If he is as timely as when he said “ISIS is contained”….we are screwed…

Looks like a scene from Lord of the Rings.

It’s easy to stand at the podium and declare that there will be no terrorist attacks when you absolutely refuse to acknowledge that any violence perpetrated by Islamic extremists as terrorism.

Given his batting average when it come to predictions, I’d say we’re going to be in deep kimchee real soon.

Previous assurance from Obama: “If you like your insurance you can keep your insurance.” Anyway everyone have a safe and happy Thanksgiving.