“Whatever authority is available to him.” 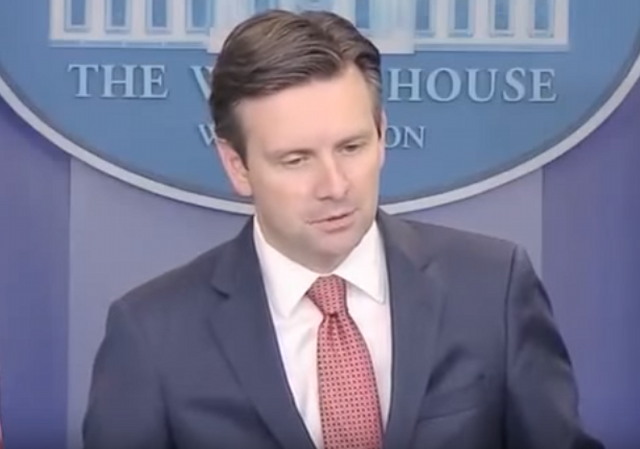 Obama has been trying to close the prison at Guantanamo Bay since being sworn in as president and now he’s running out of time. Would it be surprising for him to just go around congress?

President Obama is about to send Congress a doomed plan to close the terrorist prison at Guantanamo Bay, so he can then shut down Gitmo the way he does nearly anything—by executive order.

White House press secretary Josh Earnest repeated the familiar drill Wednesday. They “work with Congress where we can,” Mr. Earnest said. “But if Congress continues to refuse, I wouldn’t rule out the President using every element of his authority to make progress.”

Another day at the office for a progressive President intent on reducing the legislative branch to a nullity. For the record, the National Defense Authorization Act this year contains an explicit congressional ban on transferring detainees to the U.S. through 2016.

The White House, meanwhile, says the only way Guantanamo can close is if its prisoners are transferred to facilities inside the U.S. The Pentagon, at White House direction, has explored placing Gitmo prisoners at the U.S. Naval Consolidated Brig in South Carolina; at the U.S. Disciplinary Barracks at Fort Leavenworth in Kansas; and in the federal supermax prison in Colorado. Not surprisingly, Members of Congress from these states don’t want to do this.

Here’s the exchange with Josh Earnest mentioned above:

As you can imagine, there’s been some psh back on this idea.

Opponents of moving Guantánamo detainees to the U.S. mainland are firing a new round of warning shots ahead of an Obama administration plan regarding closing the facility.

Sen. Pat Roberts, R-Kan., told reporters Thursday he could hold up as many nominations as needed to try to thwart implementation of any executive actions on transferring individuals held at the prison facility at the naval base to the United States.

“This administration has continually gone around the Congress and tried to figure out which button to push to irritate Congress the most,” Roberts said. “Well, he sure as hell has pushed my button. As I have said for years and years, we are not going to have terrorists from Gitmo come to Fort Leavenworth, the intellectual center of the Army, or any other location in the United States. That will not work. We will not let that happen.”

If President Barack Obama is going to use an executive order that runs afoul of the legislative intent of lawmakers, “Why do we even have a Congress?”

Just wait and see what stinkers President Obama will provide in the months after the election.

I’m still betting on a blanket pardon of himself and everyone in the federal bureaucracy, to end the possibility of a real investigation of things like the IRS scandal — and others we don’t know about yet.

“If President Barack Obama is going to use an executive order that runs afoul of the legislative intent of lawmakers, “Why do we even have a Congress?”
That’s an excellent question.

“The National Defense Authorization Act this year contains an explicit congressional ban on transferring detainees to the U.S. through 2016.”

That means that he will break federal law by closing
Guantánamo and moving the terrorist here!

And what is the response from Senator Pat Roberts, R-Kan?
He will hold up as many nominations as needed!
There take that Obama!!

What a JOKE. We have a lawless administration and absolutely no kind of coordinated push back from Congress.The rule of law died under Obama.
And just wait for the antics that will occur during his last year in office! Maybe Congress will pass a resolution and not invite Obama to the Capital Christmas tree lighting! 🙂

The rule of law didn’t due under Obama – it died under the GOP: they are nothing less than deserters and boehners, and deserve the same punishment any military officer would suffer for desertion and boehnerism.

It’s one of the only ways that the Senate can apply the rolled-up newspaper of contempt whenever the president makes a mess. IF (and the if is important) the Senate follows through and stops every appointment that the president has put forward the moment he takes this illegal action, they can put a cold lock on his ability to jam the courts and offices full of leftists before he leaves. This is a GOOD thing, better if they can stop every single nomination including the ones in the pipeline.

If Obama really does it I predict that the Senate’s response as proposed by Sen Roberts will last about as long as Sen Paul’s filibuster did. The Roll-Over Party is a joke. The one weapon they had, the power of the purse, was given away by the House as Boner’s parting gift to the country. Now they can just skate for the remainder of Obama’s term.

Did Obama ask the Gitmo inmates?

They won’t like losing their Obama Perks like cable TV, the million dollar soccer field, special chefs, and on and on…

Likely they will petition President Trump to return them to Gitmo.

“…I wouldn’t rule out the President using every element of his authority to make progress.”

He means, of course, “progress” in sticking his thumb in the eye of the American people.

We don’t want jihadist pirates in the homeland. We LIKE having a place like GITMO where they can be sequestered away from civilized people…forever, if necessary.

And in breaking news, President Obama has, once again, ignored Congress and ruled by executive order.

Republicans in Congress were said to be quite put out and were heard to be saying heartily, “Harumph.”

And when the Demonic Emperor decrees there will be no 2016 Elections the GOP will just roll over.

They’ve change the government into a dictatorship.

The Heritage Foundation has an interesting article on The Legal Basis of U.S. Detention Policies [ http://www.heritage.org/research/projects/enemy-detention/detention-policy ].

Since 2006, each prisoner was subject to a review to establish if he was either an enemy combatant, civilian, or a combatant but should be stripped of protections of POW status because of his actions and therefore may face war crimes charges.

I can understand transferring those stripped of POW status to US prisons, but I have difficulty understanding the legality of housing POWs in a regular prison, or even a military prison.

I believe that Chairman O’s end plan is to give the whole of Gitmo back to the Castro’s and get nothing in return.