Obama Has Set Democrats Back a Generation

Obama Has Set Democrats Back a Generation

There are no Marco Rubios or Ted Cruz’s waiting in the wings. 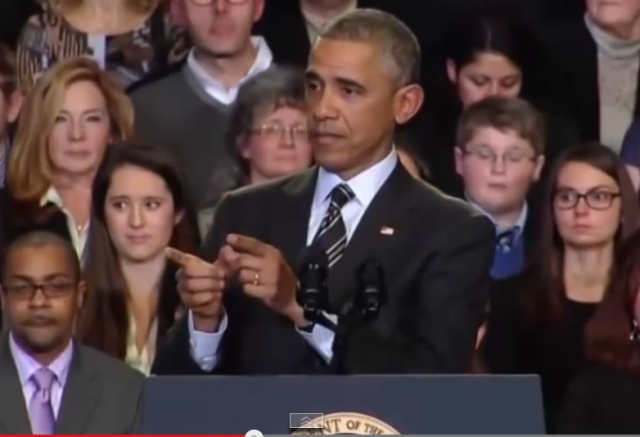 The Democratic Party is in big trouble and people are starting to notice. The last two mid term elections have flipped control to Republicans on a massive scale and the Democrats have no back bench.

Just look at their leading candidates for president. Hillary Clinton and Bernie Sanders aren’t up and comers, they’re senior citizens and there are no Marco Rubios waiting in the wings.

Ashe Schow writes at the Observer:

Obama Has Decimated His Own Party Unlike Any Other Modern President

Last week concluded the final election of President Obama’s tenure that didn’t involve replacing him. After seven years in office and as many elections, the Democratic Party has taken a beating worse than the Republican Party took under George W. Bush.

On nearly every level of government, Democrats have lost more seats under Mr. Obama than under any other two-term modern president dating back to Dwight Eisenhower. (This includes the dual presidencies of John F. Kennedy/Lyndon B. Johnson and Richard Nixon/Gerald Ford.)

Even liberals in media are coming to terms with this new reality.

A Lost Generation of Democrats

As Republicans never tire of pointing out, the Democratic candidates for president are old.

The average age of the leaders, Hillary Rodham Clinton and Senator Bernie Sanders, is 71, older than Ronald Reagan was during his successful 1980 campaign.

Where are the national Democratic politicians in their 40s and 50s? At 52, Martin O’Malley, the former Maryland governor, is this year’s lone exception. Does it say something about the party, or about the generation, that other than President Obama (born at the tail end of the baby boom), national candidates from this age group are rare? If Hillary Clinton is elected and serves eight years, by 2024, the oldest of the millennials will then be hitting their mid-40s, ready to take over. The generation of Run-D.M.C. and Winona Ryder might miss its chance altogether.

It’s so bad that Matthew Yglesias recently Voxsplained the obvious:

Democrats are in denial. Their party is actually in deep trouble.

The Democratic Party is in much greater peril than its leaders or supporters recognize, and it has no plan to save itself.

Yes, Barack Obama is taking a victory lap in his seventh year in office. Yes, Republicans can’t find a credible candidate to so much as run for speaker of the House. Yes, the GOP presidential field is led by a megalomaniacal reality TV star. All this is true — but rather than lay the foundation for enduring Democratic success, all it’s done is breed a wrongheaded atmosphere of complacence.

The presidency is extremely important, of course. But there are also thousands of critically important offices all the way down the ballot. And the vast majority — 70 percent of state legislatures, more than 60 percent of governors, 55 percent of attorneys general and secretaries of state — are in Republicans hands. And, of course, Republicans control both chambers of Congress. Indeed, even the House infighting reflects, in some ways, the health of the GOP coalition. Republicans are confident they won’t lose power in the House and are hungry for a vigorous argument about how best to use the power they have.

Not only have Republicans won most elections, but they have a perfectly reasonable plan for trying to recapture the White House. But Democrats have nothing at all in the works to redress their crippling weakness down the ballot. Democrats aren’t even talking about how to improve on their weak points, because by and large they don’t even admit that they exist.

After Obama was elected in 2008, liberals in media declared the death of the Republican Party and the birth of a new era of progressive Democrats which would last for years.

Things didn’t really work out that way, did they?

Obama has set the US economy back a generation. And, race relations in general back two generations.

On the other hand, the endorsement, promotion and furtherance of muslims and the muslim cause has been advanced by 50 generations.

Set the Uniparty back?? Nope! If anything, Barack Hussein al-Chicagi has unveiled the true nature of what had been an honorable political party. The ever leftward movement of Uniparty, academics, media and the entire Government structure primed the pump for al-Chicagi’s rise. Who are the predominant Uniparty presidential candidates? A committed, unrepentant Stalinist and Bernie Sanders.

Well at least there is one accomplishment I can thank Obama for! 🙂

Well, THAT and selling more guns and precious metals, AND inverting more state governments than any president in history…

The party of lies is doing what it always does, lying to convince everyone that things are fine. I’m ok with them believing their own BS while the sink in it.

Lots of folk voted for barack obama ’cause they thought they were making history: His Highness The First Black POTUS.

What about we get a competent and patriotic POTUS ?

Some young Marxist with a pretty face will pop up, and the progressive lemmings will flock to him/her with their unthinking, undying devotion.

They don’t care if there is any substance or experience; hell they’ll vote for a flaming idiot who has nothing to offer but promises to ‘fundamentally transform’ the greatest country on the face of the earth.

My guess? The corrupt little boy from San Antonio who grew up on the knees of radical agitators from the organization named “The Race” which aims to overthrow the US government in the southwest United States. After Obama, he sounds about right.

Ah, remember…there are TWO “Castros”. Both of them raised by the same corrupt racists.

I sent O’WreckingBall a Thank You via Twitter several days ago citing his generational destruction of the Democrat Party.

Perhaps this will be remembered as #TheObamaEffect

For starters, how could you not know about the Castro brothers from San Antonio? How about the New Jersey senator? The ex-Boston mayor?

Yes, these are Democrats and thus lower than rodent poop. But they are still photogenic and well-spoken opportunities for the DNC.

No Marco Rubios waiting in the wings? What’s wrong with you, Aleister? The Democrat party is chockfull of lying, amnesty-loving, double-speaking, back-stabbing con men.

Eventually, they will run out of free stuff to hand out. Unfortunately, that looks more and more like when they finish taking everything from everyone.

I’ll believe it when I see the crop of Democrats running for the 2020 election.

They do much better when they can run against an Evil Rethuglican who is to blame for everything wrong in the world.

But the democrat party and the corrupt media they have a monopoly on will get their candidate, don’t worry. Worry more about us, and the civil war we first have to fight with the GOP.

Obama was elected by a unique coalition. Blacks and young voters turned out in unprecedented numbers to elect him in ’08 and reelect him in ’12 despite his miserable performance.

Whether or not this extraordinary turnout can be duplicated is the key question. Without it, Democrats have little chance of winning. With it, Republicans have an uphill fight to match the numbers put up. Three decades of hectoring disinterested and uninformed people to register and vote, and making it ever easier to do both, has kept the Democratic Party alive despite the utter collapse of its policies.

“Three decades of hectoring disinterested and uninformed people to register and vote, and making it ever easier to do both, has kept the Democratic Party alive despite the utter collapse of its policies.”

In the real world, the R’s nominating Dole, McCain, and Romney had something to do with it.

The premise of this article is less and less irrelevant. As we have seen recently with Dem support of OWS and BLM, and the resignations resulting from the chaos on colleges and universities, Democrats fear the wrath of their own children. In the future, regardless of the age of their politicians, it will be the ignorant and irrational children who will define Democratic party policy – and their numbers are growing constantly, like a viral infection. Subservience to the will of the youthful mob will be more important than age. Having the preferred ethnicity, gender, etc., will merely be a bonus.