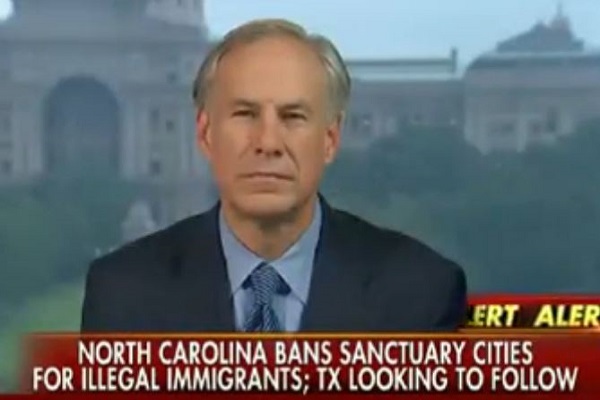 Kate Steinle’s murder by an illegal immigrant with a violent criminal past and several deportations under his belt resulted in public outcry against sanctuary cities.  While the left-leaning media worked overtime trying to show there is no link between violent crime and illegal immigration (one even going so far as to argue that illegal immigration decreases crime rates), the state legislature in North Carolina decided to take action.

North Carolina governor Pat McCrory has signed a bill into law that effectively bans sanctuary cities in his state.

North Carolina Gov. Pat McCrory signed a bill into law Wednesday that bans any policy that interferes with the enforcement of federal immigration laws.

The Protect N.C. Workers Act, HB 318, reins in local and municipal policies that disregarded federal law by providing sanctuary or “safe” cities, and public benefits like food stamps, for individuals illegally in the U.S.

“We cannot allow our local officials in towns and cities in North Carolina to make up their own rules that conflict with our nation’s laws and our nation’s values,” the governor stated during the bill signing.

The law also requires public contractors to verify a job applicant’s right to work in the country through the Internet-based E-Verify program. The Federation for American Immigration Reform wrote that this provision will make it harder for illegal aliens to find employment, which would discourage illegal immigration and protect citizens’ jobs.

North Carolina is not the only state moving against sanctuary cities; Texas governor Greg Abbott is calling for legislation that will ban them in Texas.

“Your refusal to fully participate in a federal law enforcement program intended to keep dangerous criminals off the streets leaves the State no choice but to take whatever actions are necessary to protect our fellow Texans,” Abbott wrote.

His spokesman, Jon Wittman, confirmed later Monday that the governor was throwing his support behind legislation to bar “sanctuary city” policies, under which police are barred from asking those they stop about their immigration status. Abbott wants the Legislature to address the matter in 2017, Wittman said.

A Valdez spokesman defended the policy as a modest change, and allies said the governor was distorting what she had done.

Valdez recently changed policies on holding immigrants in the Dallas County jail for federal officials once the person is past his or her release date. People who committed minor offenses aren’t held for up to an additional 48 hours for agents of U.S. Immigration and Customs Enforcement, or ICE.

Excellent. Now watch the Feds and courts try to block. Still a win!

Yep. Time to end the lawlessness of the snake-dens of Collectivism in Texas….

There’s no excuse to let this continue.

Now, if we could just address the lawlessness of the Obamabanana Republic…

If INS won’t pick ’em up, drive the criminals over to the INS headquarters in town and drop them in the lobby, flexicuffed hand and foot.

So now state legislatures have to pass a law that tells city governments its illegal to not follow the law? I’m pretty sure I learned that in 4th grade civics class.

No, city governments have not been breaking the law. There is NO LAW requiring them to cooperate with the feds, and there can’t be such a law; it is unconstitutional for the federal government to commandeer state resources to enforce its laws. That’s why states and cities were able to refuse to play along with Prohibition. And with the Brady law, which was originally supposed to be enforced by local police forces.

What NC is now telling its cities is that they must cooperate with the feds on this matter. It’s perfectly constitutional for the state to tell them that, because they are creatures of the state, so it can tell them whatever it likes. Cities have no rights against their states, unless the state constitution gives them some.

I hope it’s a lot more than that. Since the feds aren’t really enforcing immigration law anyway that’s a meaningless mandate.

It can’t be any more than that. Cities have no right to enforce immigration laws themselves. All they can do is cooperate with the feds, and that’s what sanctuary cities refuse to do. The constitution says the feds can’t make them cooperate, but the state can.

You guys just don’t understand.
IT’S DIFFERENT when dems don’t follow the law.
That makes it all better.

“The law also requires public contractors to verify a job applicant’s right to work in the country through the Internet-based E-Verify program.”

Didn’t Department of Justice go after Nebraska Beef Ltd. for attempting to do the same thing?

No, it didn’t. What Nebraska Beef did was nothing at all like this. It’s not clear to me what Nebraska Beef actually did; the article reads like nonsense. What I think happened is that if someone claimed to be a citizen they didn’t demand any proof, but if someone claimed to be an alien with the right to work they demanded proof. But that’s not discriminating between citizens and aliens, which is illegal, it’s discriminating between people making different claims. If anyone could claim to be a citizen and be hired with no proof, then aliens could just as easily make such a claim, so they weren’t discriminated against.

Can’t help but wonder at the complete uselessness of this sort of bill. The federal government itself refuses to enforce federal immigration laws.

While it sounds all “red, white and blue”, especially around election time, this helps how, again?

It seems to me that this argument is at what level the policy of allocating State assets to help the Federal Government with illegal immigration should be made. Because all laws and powers from anything lower than a State comes from the State, the State has a say in it. If the State level thinks that some liberal cities have gone off the deep end, it is their responsibility to fix it. Cities, counties and such have NO independent authority absent that given by the State, so this is just the State reminding them who is the boss.

What the state should do is require the cities and counties to transfer all illegals into state custody and build huge prisons to keep these illegals until they are deported by the federal government. Keep them there for 3 years until before releasing them to federal custody.