Is this a “new chapter with respect to ISIS?” 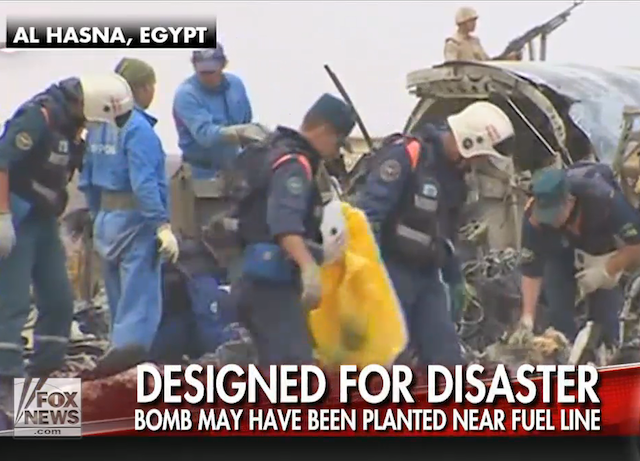 Investigators sifting through the remains of a Russian jet that crashed in the Sinai last week have uncovered intelligence about a “two hour timer,” and are connecting it with their working theory that an ISIS affiliate in the region planted a bomb on the plane’s fuel lines before it left the popular Sharm el-Sheikh resort area for St. Petersburg.

A source told Fox News about the discovery of the timer, but wasn’t clear whether or not investigators found physical evidence, or were able to decipher communications between terrorist operatives. This new information supports the involvement of an “airport insider,” and investigators are now interviewing ground crews and baggage handlers who had access to the plane before it left Egypt.

“If proven accurate, if ISIS did put a bomb on this aircraft which I believe to be true, it’s a new chapter with respect to ISIS,” Texas Republican Rep. Mike McCaul told Fox News. McCaul — who receives regular briefings — cannot discuss classified information, but said the Obama administration has consistently underestimated ISIS by emphasizing its focus on gaining territory, rather than expanding its reach to global plots.

“We always assumed Al Qaeda had this capability but now if ISIS has this capability, the threat to American airlines as well and our homeland, I think is very significant.”

Fox News was told that Metrojet 9268 disintegrated approximately 23 minutes into the flight, and investigators are now focused on a “90-minute window” before the flight took off and who had access.

1. The new “two-hour timer” intelligence
2. The fact that the plane was in the air for just 23 minutes before it went down (which lends credence to the theory of an insider)
3. The fact that an ISIS affiliate claimed responsibility

Context also matters. The airport servicing Sharm el-Sheikh is notoriously lax in its security procedures. An insider makes sense here because 1) he or she would have had access to the plane, and 2) would most likely know enough about plane mechanics to strategically place the bomb so as to maximize damage and minimize any chemical signatures. Investigators were unable to immediately find any tell-tale residue near the crash site, which may point to a bomb placed near the plane’s fuel lines: bomb goes off, fuel spills, burns, and destroys trace explosives.

Egyptian officials have downplayed the possibility that this was an act of terror, but the evidence seems to be stacking higher and higher against that line of thinking.

“… investigators are now interviewing ground crews and baggage handlers who had access to the plane before it left Egypt.”

They should tell them that are going to America and they invoke their future Fifth Amendment right to stay silent.

Wait a minute — that is not likely to work with al Sisi. Unless the Egyptians are dumb enough to turn them over to the FBI for questioning.

I hope they can get to the bottom of what actually happened. The press here won’t tell us, so I monitor overseas news…..that way I know I will find out what happened, if it’s reported at all.

Bad wiring in the center line fuel tank. That’s what the CIA would say.

Glad we have the professionals at TSA taking care of us.

isis, al qaeda. Bet it was a muslim.

If this is true it will make the airlines sweep every plane that goes to the Middle East. If they are sophisticated to do a timer then several trips at high altitude could be the next trigger.

So much for ISIS being the JV team.

Take note:
1. 2 hour timer
2. placed on fuel lines
thus – not a passenger and not the baggage handlers.
it was one of the ground maintenance crew, mechanics, re-fuel people.

If the bomb turns out to have been planted by a Muslim aircraft worker, this will present an interesting PC dilemma.

There is no physical characteristic or blood test or scan that can detect if or when a Muslim will turn fanatic. The US military has discovered this many times in Afghanistan and more recently in Jordan. This has been true even within the ranks of the US military (e.g., Fort Hood).

So, do we just allow Muslims to work on planes and accept the loss of aircraft as the price for political correctness? Do we require all Muslim wokers to be shadowed by a non-Muslim inspector? Do we take a page from Franklin Roosevelt and simply ban Muslims from working on planes?

Would you allow your daughter to fly on a plane if you knew an unsupervised Muslim had worked on it?

(yes this is sarcastic) Did the bomb look like a clock in a small metal case? We have not seen Ahmed the boy genius clock maker in a while since he went over to the Middle East.

All security is based on trust. You can not trust all muslims therefore you can not trust any muslim. All international airport operations could be turned over to Egyptian Christians. It would take some time to train them but passengers could trust them.