Did an ISIS bomb bring down a Russian jet?

Did an ISIS bomb bring down a Russian jet? 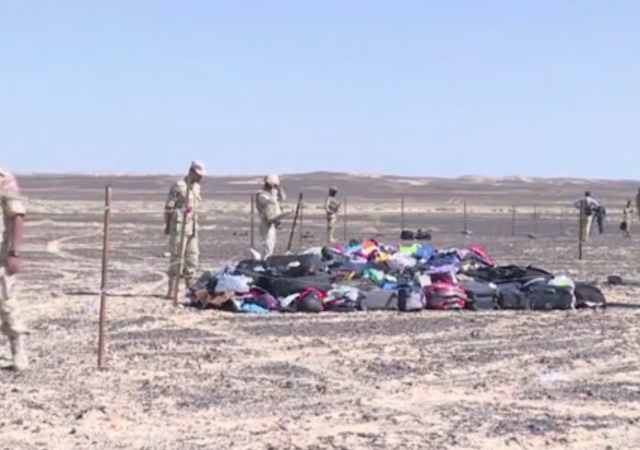 Last Saturday, a Russian jet carrying 217 passengers crashed in Egypt’s Sinai Peninsula. The Metrojet flight was making its way to St. Petersburg from a popular Red Sea resort when it went down in a remote, mountainous region of the Sinai.

Almost immediately, two European airlines suspended all travel over the region where the jet crashed—and for good reason. According to the Associated Press, the Hassana area where the wreckage was found has played host to clashes between Egyptian forces and a group of Islamic militants who recently pledged their loyalty to the Islamic State.

A local ISIS affiliate declared responsibility for the crash (now, attack), but the claim was quickly scuttled by both Egyptian and Russian officials. Now, however, US intelligence reports have revealed that it is likely ISIS or one of its affiliates planted a bomb on the plane.

“There is a definite feeling it was an explosive device planted in luggage or somewhere on the plane,” the official said, stressing that no formal conclusion had been reached by the U.S. intelligence community.

Egyptian authorities haven’t publicly responded to reports on U.S. intelligence. Since the crash, they’ve downplayed the possibility that terrorism could be involved.

Russian officials, as well as Metrojet, have insisted that the plane crashed happened due to an “external impact.” U.S. satellite imagery detected heat around the jet just before it went down, but officials say that heat signature could have come from any number of things (think an engine exploding)—not just a bomb blast.

According to terrorism analyst Paul Cruickshank, “This would be the most significant terrorist attack since 9/11, there’s no doubt about that, with the Russian involvement in Syria. If ISIS really was responsible for this, this will turbocharge their popularity in the global jihadi movement.”

I wonder if Putin will ask Obama for advice on how to write strongly worded letters.

Team Obama wants to say, “told you so” to Putin.

But if ISIS did do this, I am curious to see what the Russians do in response…

Concur, EBL. In typical liberal projection this administration has done what they falsely accused Bush2 of doing; cooking the intel to get the result they wanted. Dozens of CENTCOM intel analysts have gone to the IG to complain that this administration was pressuring them, via the DNI, via the CENTCOM J2, to change their assessments to conform to the Obama administration’s domestic political narrative.

Which, of course, per the emails and other documents they were forced to cough up is exactly what they did with Benghazi as well. Per the emails, if it weren’t for the “principals” and the various “equities” those in the email chain were representing that “anti-Muslim” video narrative never would have been in the talking points.

We just can’t ignore the very real possibility that Obama’s minions are fabricating the evidence to support Obama’s prediction that Putin was getting himself into a quagmire in Syria.

Now it may turn out this was a terrorist attack carried out by or on behalf of the Islamic State. But this administration has a track record of astroturfing the evidence to support Obama’s empty claims from at least Fast & Furious, and it is impossible to ignore that.

See this incident, which John Hinderaker at PowerLine found from 1986, for the sort of thing the KGB and Putin might be capable of.

But… But… But… Waterboarding!

…“This would be the most significant terrorist attack since 9/11, there’s no doubt about that,…

The shootdown of the MH17 over Ukraine would be greater than this one, but since Russia did it, I’m suspecting we’re not going to count it.

Whatever the scope, how did you get to terrorism?

Plane transponder and systems abruptly stopped reporting in one instant. Either it was a catastrophic engine failure/fire/explosion, or some other foreign explosion.

What is curious is that the debris field is so small, much smaller than MH17’s.

The initial ISIS claim was to have “shot down” the jet with a missile, which clearly didn’t happen. Why were there no claims of a bomb IF they did it? The group doesn’t seem shy about taking credit.

Not to say it wasn’t a terrorist bomb, but it doesn’t sound like an ISIS plot, claiming the wrong thing and nothing else for days.

There could be other motives than terrorism for planting a bomb on a plane; just sayin’.

“There is a definite feeling it was an explosive device planted in luggage or somewhere on the plane” Feelings – when you don’t have evidence, go all Streisand.

Still no physical evidence? Surely the wreckage must bear some sign of what caused the crash. Forgive my scepticism, but – The Russians don’t want anyone saying negligence was responsible. Russia, the UK and USA have a vested PR interest in blaming ISIS.