Netanyahu at White House: “We have not given up our hope for peace”

Netanyahu at White House: “We have not given up our hope for peace”

“We’re with each other in more ways than one” 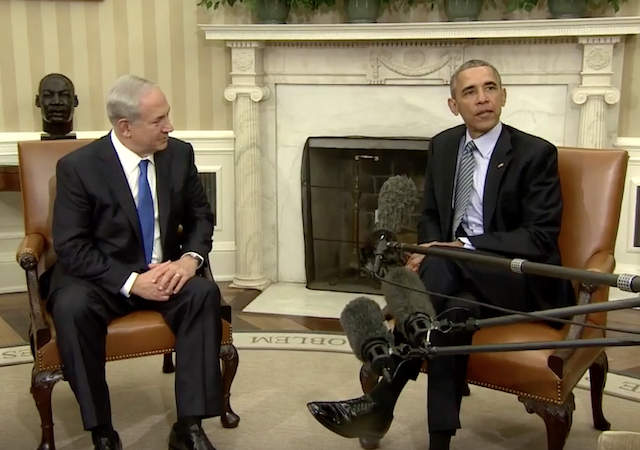 Today Israeli Prime Minister Benjamin Netanyahu met with President Obama at the White House to discuss ISIS, tensions between Israelis and Palestinians, and the continuing scandal that is the Iran nuclear deal. It was the first time the two men have met face to face in over a year, and the first time they have spoken since the passage of the Iran deal.

During a private session with the press, Obama emphasized that both leaders are looking for “common ground,” and condemned the latest wave of Palestinian violence perpetuated against Israelis; he backed the right of Israelis to defend themselves, but pushed Netanyahu for ideas on how to relieve the tension. Netanyahu continued his public support for a two-state solution, but insisted that a solution would only come when the Palestinians relent and recognize Israel as a Jewish state—which the Palestinians continue to reject.

You can see the press briefing here:

At the top of their meeting on Monday, both Obama and Netanyahu stressed the strength of their alliance.

“We’re with each other in more ways than one,” Netanyahu said, as Obama highlighted the “extraordinary bond” between the two countries.

Both also insisted they had not given up on the pursuit of Middle East peace, even as the prospect of an elusive agreement between Israelis and Palestinians appears further out of reach.

Speaking to reporters ahead of their private meeting, Obama said he would seek Netanyahu’s thoughts on ways to “lower the temperature” between Israelis and Palestinians and get the parties “back on a path towards peace.”

Netanyahu declared, “We have not given up our hope for peace.” He emphasized that his preference was for a two-state solution, but gave no ground on the Israelis’ long-standing conditions for achieving that outcome.

Pres says he has to thank the press about 8 times to get them out of the Oval Office. pic.twitter.com/gLR96iWo3l

If you don’t have 9 minutes to spare, check out this clip from NBC News, in which President Obama tries to turn the tensions between the U.S. and Israel over the Iran nuclear deal into a near non-issue:

During the meeting, protesters rallied against Israel for Palestine against Israel. The gathering was organized by the Answer Coalition, and supported by groups like Code Pink.

They got creative with the marketing… 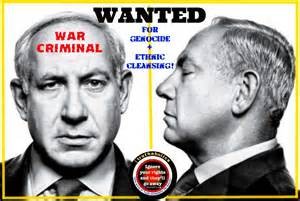 …but not many people showed up.

Next block over (in front of. The White House) people protesting against Palestine. #tourist pic.twitter.com/HQCQM80n0S

The meeting comes as the U.S. begins negotiations for the renewal of a 10-year defense aid pact which would continue the flow of money from the U.S. to Israel—a major point of contention with those who would like to see a little more space between the two countries.

Israel now receives $3.1 billion from the United States annually and wants $5 billion per year for the next package, for a total of $50 billion over a decade, congressional officials have told Reuters. One U.S. official predicted the sides would settle for an annual sum of $4 billion to $5 billion.

Obama’s tangible support for Israel’s security could help deflect accusations from Republican presidential hopefuls that he and any Democrat successor are less pro-Israel than they profess to be.

U.S. voters will elect a new president in November 2016.

“The security of Israel is one of my top foreign policy priorities, and that has expressed itself not only in words, but in deeds,” Obama said.

Netanyahu thanked Obama for that commitment.

In front of the press, at least, the meeting appeared cordial—but judging by how our president has trampled the relationship between the U.S. and Israel, I’d guess there’s a lot more to this than what they chose to put in front of the cameras.

Never give up your hope for peace.

But never forget what the pre-conditions for peace are.

You make peace with people who are no longer your enemies.

In the context of Israel, I think three things are needed:

1) An acknowledgement of all the agreements against interest that Israel has kept, is keeping, and can be expected to keep in the future. Particularly about the Temple Mount.

A United Nations Security Council resolution devoted to praising Israel for keeping all agreements about the Temple Mount, in spite of the fact that that means waiving many religious rights for Jews, and calling on all governments to do what they can to stop slander about that and all other slanders as well, and not mentioning anything else in the resolution, would be of some help.

2) An end to any impunity, or any sorts of promises of impunity, for anyone who physically attacks Jews and Israel outside of participation in a major war – which also shouldn’t happen.

It is not enough for such people not to be honored; it is not enough for them to be condemned; there must be a perception among people that anyone who attempts to do this will be punished severely, and any entuty that pretends to be a government must join in. And that includes attacks against Jewish settlers in the West bank.

3) A statement by the interlocutors of Israel that they have no problem with the existence of a Jewish state in the Middle East.

YOU SAY THAT IS IMPOSSIBLE?

You must never give up your hope for peace.

praising Israel for keeping all agreements about the Temple Mount, in spite of the fact that that means waiving many religious rights for Jews,

“Waiving”?! Is that what you’re calling it? You can only waive your own rights, not someone else’s. Did the southern states use to “waive” black citizens’ right to vote?! What the Israeli government is doing on the Mount is a crime that it would not tolerate from any other government in the world. If the US government tried to “waive” Jews’ right to free speech and the free exercise of religion, Israel would launch a multimedia campaign denouncing it. But somehow it’s OK when it does it?

Note that I listed Netanyahu’s condition only third.

“Hope”. Now there’s an interesting word. For how long do we “hope” before actually doing something significant to facilitate peace. “Hope” without action is empty. No constructive action is a hallmark of the current administration.

No Palestinian state on land historically belonging to Israel. Not now. Not ever.

The Jews chose G-d and G-d chose the Jews and gave them the Jewish homeland.

It’s beyond time for the Palestinians to leave.

You have it backwards. First, God did the choosing.

Hmmm, how could the Israelis “reduce the tension” of having Palestinians attack them with knives?

Only by staying away from their Holy places – which have now been confirmed by archaeology to have been at the Temple Mount since the First Temple. That, of course, is Obama’s preference, just as he’d prefer black criminals who attack cops or citizens be allowed to kill them instead of the victims defending themselves.

How long do you hope before realizing such hope is pointless? You cannot have peace until everybody who obeys Allah is dead. Otherwise you do not have peace you have hudna, which is the mere illusion of peace. The moment they believe they have or can gain the upper hand all agreements with infidels are void, because that’s what Muhammad did.

Yeah. Say meaningless words about Israel’s right to self defense and then put the entire burden of compromise on Israel’s shoulders.

Don’t be fooled by President Nosepicker’s dodge here (a dodge he supports, but didn’t engineer himself – he’s simply too lazy and too dumb.)

This move is de factor President Jarrett’s: and it’s a smoke screen. Israel is in Jarrett’s cross-hairs, and Jarrett has barry by the short ones. Look behind the smoke to see what the left has awaiting for Israel: it has Iran and Jarrett’s name on it, and it’s gonna be ugly.