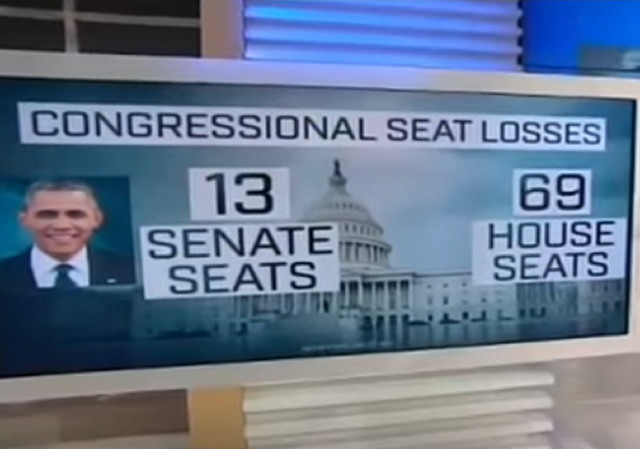 Yesterday on Meet the Press, Chuck Todd outlined the huge losses the Democratic Party has suffered under Obama’s tenure. He even spoke to a Politico reporter who called the Obama machine a lie.

Meet The Press host Chuck Todd and his Sunday panelists outlined the Democratic Party’s heavy losses under the Obama administration, with panelist Marc Caputo saying the idea of the “Obama political machine” was a “lie” that couldn’t win without him on a ballot.

Under Obama, Democrats have lost 13 Senate seats and 69 House seats in Congress, and the results are even more staggering on a local level. Democrats have lost 12 governorships, including Kentucky last week with the election of Matt Bevin, 30 state legislative chambers and more than 900 state legislative seats. That’s the worst showing for an incumbent president’s party since the Richard Nixon years, due to the taint of Watergate…

The numbers really are stunning:

Democratic losses under President Obama, by the numbers. #SpecialReport pic.twitter.com/N6krnZMljz

Republicans have total or partial control of 76% of the country's state legislatures. Wow. https://t.co/djJHy5fclV pic.twitter.com/lmhjx6cyax

Of course, winning the White House is going to be the key to real change.

I tweeted a thank you to O’WreckingBall last week. It will take decades for the democrats to recover.

I’d like to think that but people tend to forget.

Elect a Pub president and the Dems will make everything that person’s fault. Pubs in the state houses might suffer as a result.

It will require the GOP to be smart: and that doesn’t inspire confidence.

Does… I mean, how feasibly could republicans amend the Constitution, if they wanted to, with partial or total control of 76% of the states?

Honestly the chances aren’t very good. The 76% is kind of misleading. Yes, Red controls 76% of state houses and senates combined, but they only control both houses in 29 states. It takes 38 states passing the amendment in both houses of the state to ratify.

If poor little Chuckie is depressed now, then he’d better hide under his bed for what’s coming next.

It may well take decades for Democrats to recover, but it will also take decades to reverse the damage Obama has done with a complicit GOPe. Even if we elect a Republican to the WH in 2016, we won’t be out of the woods for a long, long time. I’m not sure we’ve even seen the worst yet, so brace yourselves.

That assumes that the “Republican” we elect to the white house isn’t an establishment puppet, otherwise nothing will really change. Remember the difference between an establishment republican and a Democrat is….nothing.

They may be far too similar on some things, but to say there’s NO difference at all is silly.

“…but to say there’s NO difference at all is silly.”

I don’t find it silly at all. Obama might be an exception. Most R’s would not be that bad, they would at least be a bit slower on the march down the path. But there lies the problem, slower leads to the same place at a different pace. Since Reagan there has not been a single R in office that has been a conservative working to make government smaller. Government has expanded under all of them, including Reagan.

A Republican Congress would not have passed a bill that requires fast-food restaurants to post calorie counts for everything on their menu, or that makes it illegal for citizens to insure their health according to their own needs and circumstances. A Republican Congress would not have gone along with Hillary’s plan to imprison doctors who practice medicine outside the government’s strict schedule.

It is simply ridiculous to say that there is NO difference at all between the two parties. But then, aren’t you a Trump fan? And Trump, of course, was a Democrat until recently.

“A Republican Congress would not have passed a bill that requires fast-food restaurants to post calorie counts for everything on their menu, or that makes it illegal for citizens to insure their health according to their own needs and circumstances. A Republican Congress would not have gone along with Hillary’s plan to imprison doctors who practice medicine outside the government’s strict schedule.”

I could list all the things a R congress has done, but that would take a loooong time. Better then, just ask you, when can we expect the current R congress to overturn those things in your list?

The answer is never.

I’ve always made it clear I support Cruz. Unlike you, who will never say who you favor for fear of exposing who you really are. Regarding trump, I’d take him in a skinny minute just to spite the big money statist republican hacks like you. And I’ve made that very clear as well.

If only my state would get a clue.

I hear you. Oregon is one of the few states where Republicans actually LOST seats in the Legislature in the 2014 election. The Democrats gained one seat in each chamber, giving them a majority in the previously-even-split Senate and a stronger majority in the House, and the Dem Governor was re-elected.

All this happened despite the “Cover Oregon” Obamacare exchange failing (to the tune of $500 million in lost taxpayer funds — did I mention we only have 8 million or so people and only about half pay taxes?) and numerous scandals from the Governor’s office (he has since resigned and been replaced by the even-more-extreme-Left Sec. of State). Indeed, pretty much every time a scandal or misconduct has been uncovered, it’s been a Democrat behind it and/or benefiting from it. Yet, they still get re-elected. Every. Time.

The culture is broken. There’s no other explanation.

Redistricting explains SOME of the congress losses but doesn’t account for the senate losses. Explain that Maddow…

Of course, winning the White House is going to be the key to real change
Not as I see it. The real power of the left lies in the administrative state and the judiciary, both of which remain as is regardless of who occupies the Presidency.

It is not just obama that people are rejecting it is democrat policies that they have all had a hand in. They are whistling in the dark if they think the nightmare for professional politicians will be over at the end of obama’s term. They all voted for obamacare the albatross.

People have been rejecting the democrat policies for at least six years. Too bad that the republicans have pretty much the same policies.

The damage Obama has done will take generations for the nation to repair — if America remains one nation. (I doubt it will.)

Remember who we’re tolerating to lead out party: the likes of Boehner, Son of Boehner (Ryan), McConnell, Prebus…ad nauseum.

And remember who we’ve tolerated to run our educational institutions.

And remember who we’ve tolerated running our media. (We pay to watch their programming, don’t we?)

Because of who we tolerate to run our party, our media and our educational systems, the democrats are a mere election cycle away from giving us another Obama.