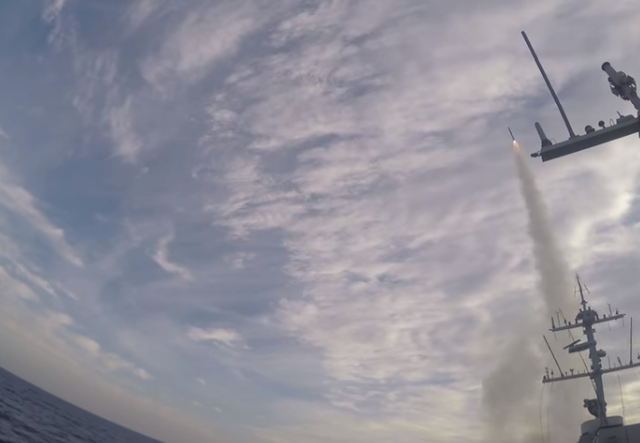 The 4.5 meter-long surface-to-air missile can carry a payload of up to 60 kg. The missile is built to counter comprehensive airborne threats including fighter jets, combat helicopters, incoming missiles, and weaponised drones. Jerusalem Post reports:

Israel Aerospace Industries carried out on Thursday the first successful interception test of the next generation Barak 8 missile system, which is designed to protect naval ships and offshore gas rigs from hostile aircraft, missiles and rockets.

In the test, the INS Lahav, a Sa’ar 5-class corvette, positioned just south of Haifa, fired a Barak 8 missile and destroyed a fast-moving, jet-powered drone at 7 a.m.

It was the first time the missile was launched from a ship, Vice Admiral Eli Sharvit, navy chief-of-staff, told reporters. (…) The project has been in joint Israeli and Indian development in recent years, and is officially due to become operational in both navies within one to two years, he said.

According to London-based newspaper The Guardian, Barak 8 is set to play a key role in securing the Israeli offshore gas fields.

Post-nuclear deal, Iran-backed Lebanese terrorist outfit Hezbollah has access to fresh funds and has reportedly bought Russian-made long-range Yakhont missiles capable of hitting targets on sea. India too is keen to ramp up its naval defense capabilities as China tries to outflank India by building a deep-sea naval base in Gwadar, Pakistan.

In February 2015, Israel Aerospace Industries (IAI) signed an agreement with an Indian defense manufacturer to produce and market surveillance drones in India. India’s Armed Forces, Police, Coastguard and Border Security Forces (BSF, ITBP) are considered to be the potential buyers.

Israel-India bilateral ties have come a long way since two countries established full diplomatic relations 24 years ago. Trade between India and Israel has grown from a meagre $200 million in 1990s to over $5 billion in 204-15. Today, both countries are cooperating in wide areas including space exploration, higher education, industrial research, health care, water management and agriculture technology.

It’s horrifying to consider that Israel may need those missiles to protect itself against the American air force under that freak Valerie Jarret’s command.