Hillary Clinton Will Yell at the Referee, So Help Her!

Hillary Clinton Will Yell at the Referee, So Help Her! 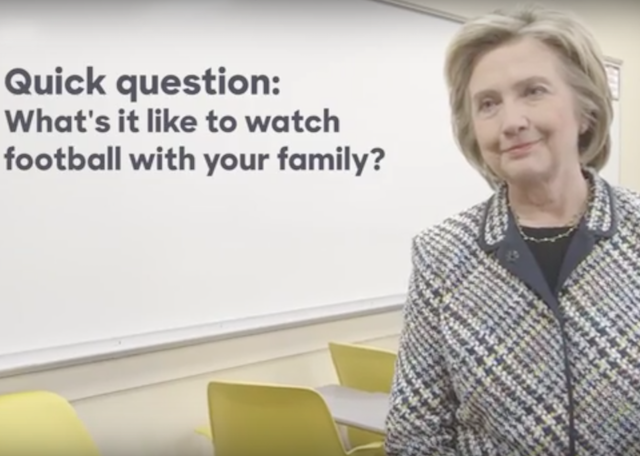 Anyone observing the 2016 election cycle who also possesses a functioning brain stem (and I assure you, there are a great many people observing the 2016 election cycle who don’t) knows that some candidates and comms shops excel at relating to voters, and some don’t. Some attempts fail harder than others…but nobody—and I mean nobody—fails as hard as Hillary Clinton when it comes to offering proof of humanity.

This Thanksgiving, Team Hillary updated their “Quick Question” YouTube series in a vainglorious attempt to convince voters that fun and family bonding is a thing that happens when an Arkansas football game is on TV.

Legal Insurrection needs a “painful” tag, just for moments like this:

Here’s a hint, guys: if you’re going to ask a quick question of a presidential candidate, make sure it’s in relation to something that candidate actually cares about. Here, her mouth is saying, “I do indeed watch the sportsball!” but her eyes are saying, “my entire staff is fired.”

This next one is a little older, and sounds entirely made up but still manages to be sincerely depressing:

After watching this, I don’t even believe she has a family. Chelsea is a myth.

It just keeps getting worse. Back in October, our favorite crack team told us the hilarious story about how the former Prime Minister of Bulgaria once called out Secretary of State Clinton for gold medaling in the hair equivalent of resting bitchface:

So, what have we learned? We’ve learned that Hillary Clinton has somehow managed to make the three of the greatest things in existence—football, stupid family fun, and international travel—sound about as interesting as watching paint dry.

I can’t wait to hear her make a compelling argument for, say…calm between two nations maintaining a presence in disputed border territory in the Middle East?

Heh. Hillary abandoned Arkansas when she moved to NY to run for the senate. She arrived there and declared she had always been a NY Yankee fan – but didn’t know Joe Torre’s name.

Yes, painful, and laborious to watch.

But Happy Thanksgiving to all!

“I enjoy the football. When one team scores and the other team come up to bat, I get excited. Excited, I tell you”

I’ll bet she almost drops the duck rifle she was cleaning.

The bullsh-t that flows from that corrupt, incompetent, deranged woman’s mouth every time she opens it could fertilize an acre of land.

You know, maybe she could be useful after all…

We know when she tells stories that her story is a lie, but we don’t have enouygh information to determine what the lie is.

I’ll bet she and Bill never thought to try a can-opener on the coconuts.