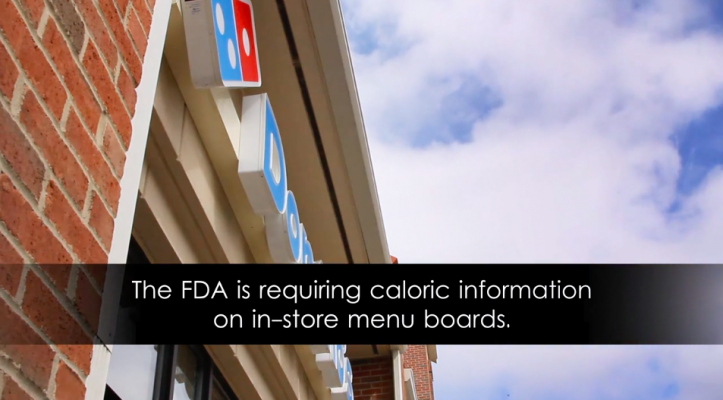 Odious Obamacare is about more than crippling families with massive cost increases and destroying the market for innovation that has created so many lifesaving drugs and treatments.

The small-business regulatory compliance costs for restaurants and grocery stores to report calorie counts for each and every menu offering, which would go into effect in December 2016, are threatening to add yet another burden to ma-and-pa outfits across the country.

Wednesday, the bipartisan”Common Sense Nutrition Disclosure Act” was approved by voice vote to move to the full House committee and means some relief from the insanity of Big Government may be on the way. The bill seeks to ease the requirements of restaurants and grocery stores to disclose the calorie counts for their foodstuffs, regulations that add up to nearly 400 pages of national disclosure requirements from the FDA. The compliance required is overwhelming enough for some Democrats to part from their Dear Leader and join Republicans seeking to amend the process.

But what’s more awkward for the Obama nutrition-gestapo is that a study from NYU reported on in the Wall Street Journal this week shows that there is virtually no difference in menu-ordering when consumers are provided with calorie counts.

I suppose that’s what is known in the market-research world as “science.” And the Progressive faithful would be… “Deniers”:

New York University researchers used receipts and surveys at McDonald’s, Burger King, KFC and Wendy’s to track customer purchases. In New York City where menus were labeled, calories averaged between 804 and 839 per meal, essentially the same as the 802 to 857 calories at fast-food locations in New Jersey that didn’t post calorie content.

Say you’re a pizza chain offering the usual selection of condiments to your customers: pepperoni, sausage, olives, onions, pineapple, extra cheese, etc. — under Obamacare’s accompanying regulations, you have to post the calorie count for every possible combination of toppings, for every size and slice of pizza. For Domino’s pizza that would amount to posting 34 million different calorie sums given their variety of toppings.

This regulation tries a cookie cutter approach, treating grocers, convenience stores, and pizzerias with endless combination possibilities the same way as restaurants with constant, simple menu items….Requiring pizza franchises to post in their store every potential topping combination, more than 34 million possible outcomes, when more than 90 percent of their orders take place over the phone or the Internet, just doesn’t make sense.

The current regulations state that menu-labeling requirements apply to:

…[Any] standard menu item that is offered for sale in a restaurant or similar retail food establishment that is part of a chain with 20 or more locations doing business under the same name….

Requiring that they disclose on the menu itself, the “menu board,” and in a written statement available to the customer:

…the number of calories contained in the standard menu item, as usually prepared and offered for sale; and (bb) a succinct statement concerning suggested daily caloric intake, as specified by the Secretary by regulation and posted prominently on the menu and designed to enable the public to understand, in the context of a total daily diet, the significance of the caloric information that is provided on the menu…

Places like Domino’s have in fact already been providing calorie information on their website, where the vast majority of orders take place. They have been doing so for a decade, without government coercion or nonsensical bureaucratic regulations coercing them to do so.

“WE” have to pass the bill so that “YOU” can find out what is in it.

So we keep finding stuff.
Next time somebody uses the word “comprehensive” in front of me I will punch them in the face.

Consider the salad bars in some restraurants and most supermarket delis. Would there have to be a calorie count by serving size for every ingredient? What about free happy hour hors d’ouvers in the bar area of a restaurant? Then there are the popular build your own menu options on everything from omelets to burgers, burritos and noodle dishes.

All of that will come to an end. However, you must realize this is done for the greater good.

When I go out for a good, greasy cheeseburger and a beer, I’ll never look at…or care…about a calorie count.

A lot of places should print them on toilet paper, so that they have SOME utility…

Then the next step will be, once they have all the calorie data, to make it illegal to place an order for more than the government prescribed calorie limit.

Forget about it. Dems passed that destructive POS legislation without a single Republican vote using a bogus procedural trick. So repeal it *all*, or *not at all* and let the Dems slowly hang by it. They richly deserve to.

I own a quick service restaurant and it’s already affected me. Rather than purchase our produce and bread from local vendors, I now have to order through the national system. So, I had to “fire” my neighbors, with whom I’ve been doing business for close to 20 years.

In order to accommodate storage of larger orders, since I don’t get daily deliveries from the local vendors, I had to install an outside storage shed and purchase a freezer. That cost about $8,000 and the monthly electric bill is over $100.

All that just for the changes stemming from changing my bread supplier. One item on the menu.

Every election is not about Dems or Repubs, it’s about oppressive, Big Brother government vs. small government. There is a scale: one side is freedom and prosperity and the other side is the size of government. It’s always a trade-off.

However unsatisfactory the GOP leadership or the GOP majority may be, a Republican Congress would not have devised such an insane control-freak policy as the calorie-count requirement, nor would a Republican Congress have made it illegal for citizens to insure their health in the way most appropriate to their own needs and circumstances.

This simple truth is lost on those who vow they’ll never vote for another Republican if “the GOP” doesn’t “send us better candidates.”

I think the Republicans are making a mistake offering a repeal of any part of Obamacare without first offering an amendment to the legislation that states, “And since this is just one aspect of the whole thing that isn’t working, the entire ACA is repealed.” And force the Democrats to vote on it. EACH AND EVERY TIME! Force the Democrats to take full responsibility for everything that’s wrong with Obamacare. Since, after all, they are.

From what I have read, the issue in this kind of attack or solar event is the power grid. Coal is the least vulnerable. The idiot government led by both democrat and republican (mostly dems) is killing coal making the vulnerability higher. Colorado for example is 70% coal currently. The Colorado government supported by both parties passed legislation pushing a change to natural gas in part because the (current) costs are low and second due to irrational global warming alarmist nonsense.

Current planning shows populations from surrounding states moving into Colorado to survive as large parts of Colorado’s grid should survive. That will no longer be true once the conversion is in effect.

Sorry, that comment was posted on the wrong thread! I clicked on EMT thread and thought that was where I was commenting

It happens to the best of us.

– which is not meant to imply that you’re not one of “the best.”