College administrators, who bear much fault, must protect all students, not curry favor with the loudest mouths. 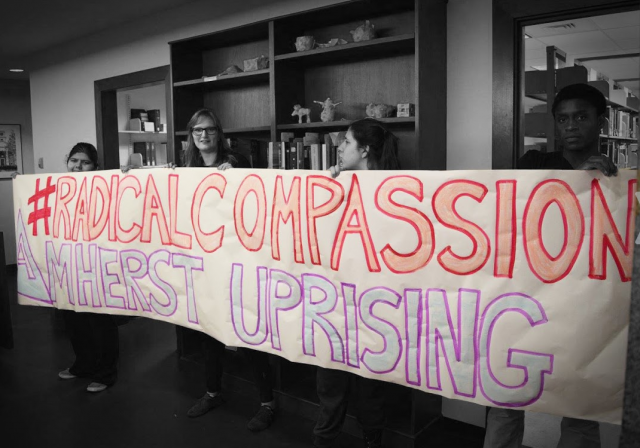 Two generations of far leftist Humanities and Social Sciences faculty proselytizing, in which every student except for straight Christian white males is a victim of systemic discrimination and repression, have finally paid off.

We, or rather they, have created a cadre of little bullies who demand the repression of other students’ expression and thoughts, in order to implement a new order on the campuses based on the feelings and sensitivities of the crowd.

From Yale to Mizzou to dozens of other campuses, mob rule rules.

Aleister summarized a week’s worth of such thuggery in Madness Week at College Insurrection, and Cornell student Casey Breznick got to the core of the problem in Snowflake Protesters — Struggling to find a Struggle:

The more recent developments of the ridiculous notions of trigger warnings and safe spaces are only the latest manifestations of this self-defeating endeavor to placate the increasingly deranged mindset of the most perturbed and eccentric of students….

In order to compensate for the lack of struggle like that experienced by their heroes, the student protesters now combat slights, snubs, offenses, mean-spirited comments, claims of unsafe campuses, etc. as as their form of struggle. This largely explains the advent of microaggressions, intersectionality, invalidated experiences, and hurt feelings as major transgressions and offenses treated equivalently to bodily harm, and the advent of safe spaces, trigger warnings, and speech codes as remedies….

The saddest part of all of this is that every time the rational and even-headed come out on top, or whenever the students are appeased but not to the extent they want, they take this is a validation of their struggle: the “system” is designed to oppress them. Administrators think they have acquiesced enough, while the students simply gear up for the next set of demands, after having invented even more offenses and elements of their never-ending struggle.

There is no evidence that a few weeks of administrative capitulation have done anything but make the demands even more outlandish.

Students at Amherst College are demanding that the school’s president accede to a list of demands that would effectively eliminate free speech on campus.

The demands, which were presented in person Thursday evening to college President Biddy Martin, are outlined in a letter published by Amherst Soul, which also notes that the students expect action to be initiated within “24-48 hours” and completed by Wednesday, November 18 (roughly six days after they were first issued). If those deadlines are not met, they warn, “we will organize and respond in a radical manner, through civil disobedience.” …

“We have begun this movement, Amherst Uprising, in an effort to change the status quo for a more just and inclusive environment within our campus,” the letter states. “We demand that Amherst become a leader in the fight to promote a better social climate towards individuals who have been systematically oppressed.”

Anticipating a negative reaction to their letter, the students also insist that the campus police department “must issue a statement of protection and defense from any form of violence, threats, or retaliation of any kind resulting from this movement.”

More specifically, they want President Martin to denounce the actions of students who displayed “All Lives Matter” and “Free Speech” posters, and to warn the student body that in the future, “racially insensitive” speech would merit disciplinary action.

That many faculty and administrators are joining in the calls for repression is not a sign that the demands are justified, but that the people who helped create the problem may not be capable of protecting all students.

The President of Amherst is well on the road to capitulation:

[Note added: This afternoon, the President of Amherst issued a lengthy convoluted statement acknowledging the protesters legitimate concerns: “That pain is real. Their expressions of loneliness and sense of invisibility are heartrending. But, “the formulation of those demands assumed more authority and control than a president has or should have.”]

Certainly, college administrators have messed things up to a great degree. And calls for some reform are justified. Students are right to feel trapped by a higher ed bubble that is bursting.

But suppression of other students’ speech as a cure is worse than the disease.

I suggest colleges go PATCO (Professional Air Traffic Controllers Organization) on the anti-free speech bullies. Take a lesson from Ronald Reagan who, when PATCO went on an illegal strike, fired them.

Colleges don’t need to “fire” students, but colleges do need to fire the demands of those who think the answer to their problems is to repress other students.

If students who hate the free speech of others don’t like it, they can go elsewhere. I’ve yet to hear of a student who was forced to attend a particular high-priced college against his or her will.

Don’t give in to repressive demands. All students matter.

Full PATCO is right. Put their useless backsides out on the street.

It’s pretty clear most of these kids are missing their nappy-times. So cranky!

Or, if I might go over to British English, many of them probably have very full nappies.

Unbelievable! Having grown up during the “free speech” movement of the 60s I find it ironic that the people who were students then are probably the admins and professors now. They must be so proud!

Any student skipping class for protests should get marked as unexcused absence. no make up tests for unexcused absences and 3 gets you dropped from the class and marked incomplete. No refunds.

I have recounted here, before, how in 1969 a law professor and I came to blows over his desire to participate in anti-war student protests, when I insisted that he preside over the weekly seminar for which I was paying tuition. Long story short: The dean of the law school supported me and required the prof to give the weekly seminar, at which I was the only student. He gave the other students a Pass, even though it was a graded course. He gave me a D. The dean made him change my grade to a Pass.

You may notice that all these critically urgent protests on campuses coincide with the approach of either midterms or finals, and are invariably accompanied by demands to be exempt from the tests – which are usually granted.

Funny how that works out.

If those deadlines are not met, they warn, “we will organize and respond in a radical manner, through civil disobedience.”

Hm. They *do* realize that civil disobedience involves things like being arrested, sitting in a jail cell, posting bail, attending a hearing, hiring a lawyer, going to trial, serving a sentence, and having a permanent mark on their record, right?

Well, it’s going to be educational for these students, there’s no doubt about that. I just don’t think it’s the education they thought they were going to get.

H is for Handcuffs. R is for Ratchet. S is for Struggle. The more you Struggle, the more the Ratchet on your Handcuffs bite into your wrists. See, isn’t this fun?

A cell should be a really good safe space. If they want a quiet space, it’s usually gets quiet after the napalm rolls in.

The Liberal Arts-Humanities-Social Science cabal has done a disservice to students. They have pointed students inward and not outward, forward and not to the past.

What about expelling the students?

I’m sure this would have been useful to use against the football team as they would be well aware of the impact on their potential professional careers?

Get rid of the agitators so that those who want to learn can learn!

Here’s the problem with your otherwise excellent idea: Do that and you shift all the students who are not already professional agitators over to the wrong side. Then you lose big time.

The best idea I’ve heard so far is to close the school and send everyone home to their safe spaces with mommy and daddy.

Any student who would be shifted is not worth having.

Alinsky’s Rule #4- Make the enemy live up to its own book of rules.

Conservative students should demand “safe spaces” from and “trigger warnings” for progressive ideas. According to Gallup, 38% of Americans identify as conservative and only 24% as liberal. The faculty and administration of a college or university should reflect that as should the student body. Anything less than that is unfair. We must make sure all voices are heard.

This. Very much this.

Amherst president Biddy Martin previously served as Cornell provost and University of Wisconsin Madison chancellor. She’s been working up the ladder of crazy, and now seems to have reached the top. I wonder how that’s working for her.

What’s needed is a counter group of students making the exact opposite demands.

There is no evidence that a few weeks of administrative capitulation have done anything but make the demands even more outlandish.

No offense, Professor, but this is a no-brainer.

When protesters with a severe entitlement mentality are given everything they demand, the very first thing they’ll ask themselves is, “What else can we get?”

It’s just the nature of the mindset.