Is shot – how long before they claim the knife was “planted” on her? 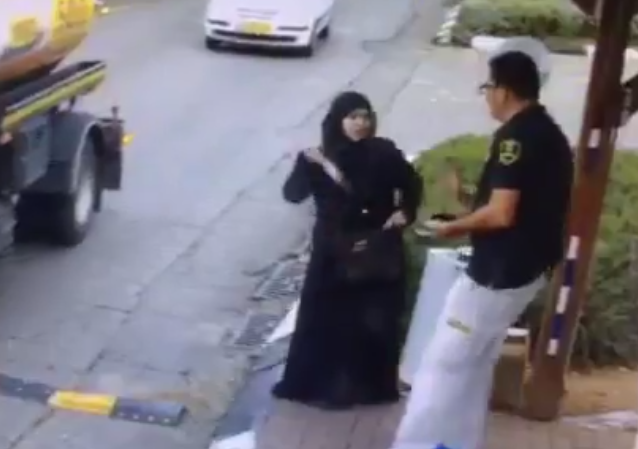 Today in Israel an Arab woman was shot by an Israeli security guard at Beitar Ilit. The woman was trying to reach a bus stop in the community, where presumably she would have stabbed waiting passengers or entered the bus and conducted a stabbing attack there.

That’s what the headlines emphasized.

But she was shot only after she pulled out a knife from her pocketbook and lunged at the Israeli man:

I wonder if Amnesty International and the anti-Israel haters in social media will claim Israel planted the knife?

Indeed, the Palestinian Authority is asserting that the woman was shot in an “alleged attack” – which is also how an Amnesty International official described it on Twitter.

Palestinian social media is spreading the image of the woman dead, without any reference to why she was killed: 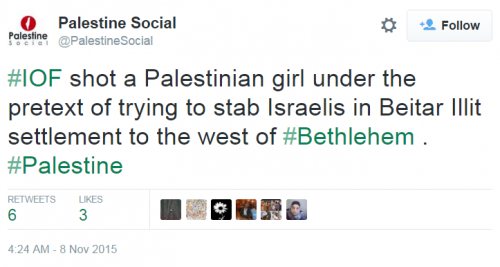 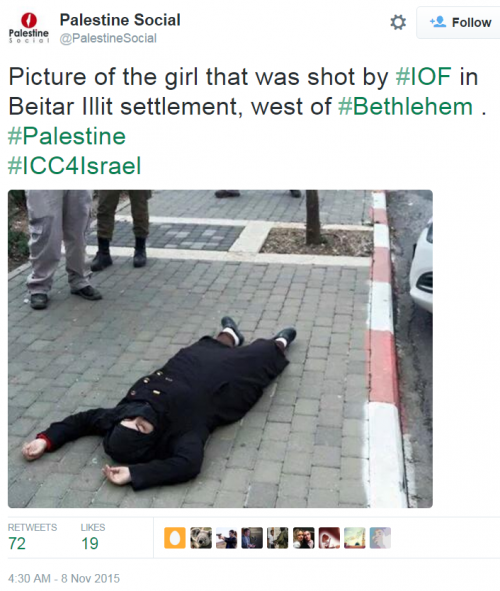 And a leading anti-Israel American activist is spreading it without context:

.@MaxBlumenthal RTs tweet criticizing Israel for shooting Pal'n w/o mentioning she was shot by her stabbing victim: pic.twitter.com/KcUvr29HMQ

"Journalist" @MaxBlumenthal RTed tweet omitting fact that Pal'n was shot by her victim, identified a 22YO as a "girl," & wrongly blamed IDF.

In case you were wondering, it was not this woman: 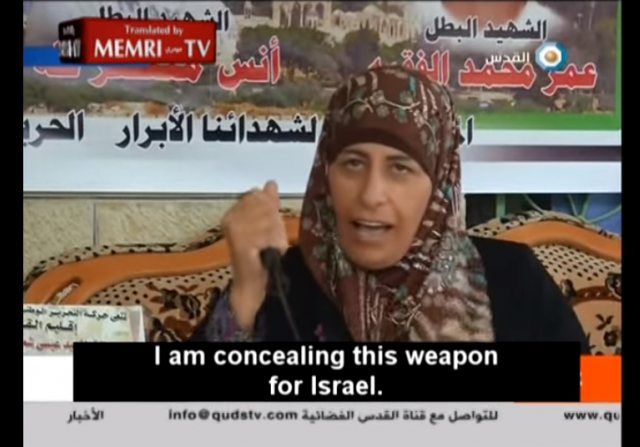 This video offers advice on how to avoid being shot:

[Correction: Apparently the stabber is not dead, she is in the hospital. Initial reports were wrong.]

I read elsewhere that she was just wounded and is now in the hospital. The picture where she’s on her back is from before iot was determined that she didn’t have a bomb vest on.

You mean, you read a report.

This knife intafada is the effects of global socialist forces’ incitement tactics to use uneducated people to fulfill their hatred of the Jewish people, thus Israel.

We see the same forces and its effects in the incitement of gullible blacks with the well financed #BlackLivesMatter tactic.

Socialists have blood on their hands and are smug about it… Take the Benghazi massacre as an example.

“that she was just wounded and is now in the hospital”

Now that is a shame.

Somebody ought to teach Muslims the Decalogue, especially the the parts ab NOT killing and NOT bearing false witness and NOT coveting…..

Eh, what the heck! As part of the price Israel must pay for putting up with them, the government ought to demand they learn all 10 of the Commandments and hourly recite their core teaching: Love the Lord your God with all your heart, all your mind, all your soul, and all your strength, and love your neighbor as yourself.

1. Moslems don’t believe in the Bible at all, so why should they pay any attention to one small section of it (which is no more important than any other section)?

2. There are 613 commandments, not just 10, and most of them (including some of the 10 to which you refer) are irrelevant to gentiles. But since Moslems don’t believe in any of them, what good would it do to make them aware of this? To them it’s a fairy tale.

3. That that is the “core” of the commandments was the opinion of one obscure teacher. It is not anything like an accepted fact.

There is no way to square the link above with the Hamas Covenant, which is the source of all the intifadas.

Muslims were slaughtering and plundering their way around the world, and bragging about it, many centuries before Hamas existed. The founder of Islam was the polar opposite of Jesus and of Jewish ethics, and that example — not the Hamas Covenant — is what inspires the hideous pattern that continues to this day.

A prominent Muslim authority said recently that Islam would not have survived without the death penalty for apostasy. And obviously such a sterile, hateful, civilization-killing creed would not dominate a billion-plus people today if not for its aggressive brutality.

It’s hard to fathom what is the source of the belief that Islam was a lovely spiritual creed until the Hamas Covenant led Muslims astray. It’s a notion that flies in the face of voluminous evidence. And given the state of the world today, trying to save Islam from the ugly reputation it earns for itself is a weird hobbyhorse.

Moslems do not acknowledge this at all. On the contrary, they claim that their religion came first, and that ours are distorted offshoots of theirs. They claim the Bible is a fabrication that we wrote in an attempt to discredit them; it contains bits of truth that we left in, but it’s unreliable because we inserted so many lies. And certainly where it contradicts the Koran it lies.

So, once again, there is no point in teaching them the ten things God said on Mt Sinai, because they deny that this event ever happened, and would not ascribe any validity to the list.

Valerie, really! Aren’t you done with these fables of Islam yet?

1. The black rock that Muslims stone when they make hajj is found where in Judaeo-Christianity (Milhouse, that’s parent and child there.)?

2. Jihad, the central tenet of Islam, is found is found where in Judaeo-Christianity?

3. Convert, pay jizya poll tax, or die is found where in Judaeo-Christianity?

4. Kill Jews and Christians, or anybody different, for that matter, is found where in Judaeo-Christianity?

5. Oppress women is found where in Judaeo-Christianity?

6. The Islamic false sense of superiority is found where in Judaeo-Christianity?

7. The love affair with death is found where in Judaeo-Christianity?

8. The notion of paradise as an orgiastic bisexual brothel is found where in Judaeo-Christianity?

Whatever the desert barbarian may have incorporated from a prayer book was syncretized with nomadic paganism into a heresy that is definitely not Judaeo-Christian.

So, please, spare us the fable.

Milhouse, that “obscure” teacher is pretty well known for an “obscure” guy. Same books, different hermeneutics. The ceremonial laws are not ours to observe. The Decalogue is, and we can only keep them if we are in the “obscure” teacher who kept them perfectly. Something about breaking one means breaking all and the weakness of human nature.

As for the Decalogue, it addresses two relationships: the vertical one between us and God, and the horizontal one between us and our fellows. The sum of it, as articulated by the “obscure” teacher is, given the text: love God. Love your neighbor. That’s a summary of all the stories told from Genesis to Malachi, then cntinued in the NT.

The gist of my comment is that the barbarians need to be evangelized that they may be converted.

He’s well known now; he was completely obscure then. His fame is entirely posthumous.

The ceremonial laws are not ours to observe. The Decalogue is

That’s bulldust. There is no difference between those 10 and the other 603.

and we can only keep them if we are in the “obscure” teacher who kept them perfectly.

Something about breaking one means breaking all

More bulldust. Each commandment is independent of the others. If you can’t keep one, that’s no reason not to keep any of the others.

Gee, and because she’s a she, no virgins. Bummer. [sarcasm intended]

The females get 69 guys who loved show tunes and had fabulous taste in interior decor.

Would that rule out Liberace (as far as the decor)? LOL!

But maybe a Huma Abedin or two if you can pry them away from Hillary.

I guess she wasn’t one of those hated right wing nutty Christians who hates gays. Oh well, maybe next time.

This has been going on since Mo first constructed the cult of Islam. That is why there must be a sensible ojective in crafting a response. Mine is the eventual elimination of Islam but using comparable tools to those leading to its spead.

A Mohammedan-free Israel would be a great first step.

(Sorry for all the typos.)

Hey, Milhouse! This one’s for you:

Paul Barber, the director at the Catholic Education Service, told the Daily Mail that teaching about the Jewish faith would ensure schools continued to comply with the stipulations of bishops that pupils are given a solid grounding in Christianity.