Will it make any difference? 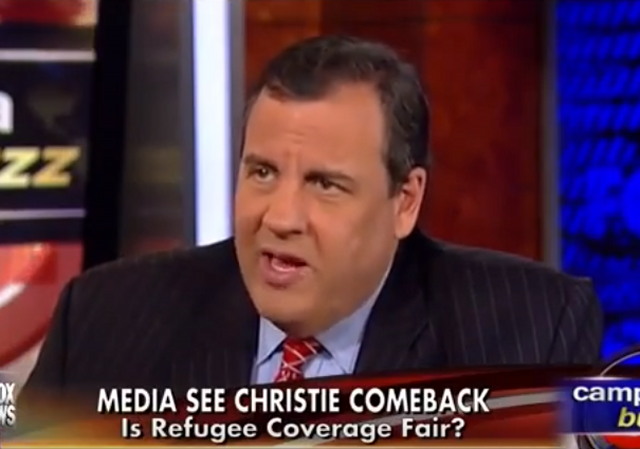 New Jersey governor Chris Christie is still pretty low in the polls. In fact, the Real Clear Politics average has him at 2.7 percent.

Christie has picked up an important endorsement, however, from the conservative leaning New Hampshire newspaper, the Union Leader.

For our safety, our future: Chris Christie for President

Thanksgiving is just past. Christmas is ahead. We doubt that too many people across New Hampshire have politics front and center right now. But in just 10 weeks, New Hampshire will make a choice that will profoundly affect our country and the world. We better get it right.

Our choice is Gov. Chris Christie. As a U.S. attorney and then a big-state governor, he is the one candidate who has the range and type of experience the nation desperately needs.

We don’t need another fast-talking, well-meaning freshman U.S. senator trying to run the government. We are still seeing the disastrous effects of the last such choice.

Chris Christie is a solid, pro-life conservative who has managed to govern in liberal New Jersey, face down the big public unions, and win a second term. Gov. Christie can work across the aisle, but he won’t get rolled by the bureaucrats. We don’t need as President some well-meaning person from the private sector who has no public experience.

Gov. Christie is right for these dangerous times. He has prosecuted terrorists and dealt admirably with major disasters. But the one reason he may be best-suited to lead during these times is because he tells it like it is and isn’t shy about it.

Christie appeared on Media Buzz with Howard Kurtz of Fox News this weekend and explained why he doesn’t want New Jersey to accept any Syrian refugees.

Christie is clearly excited about the Union Leader endorsement:

Check out the front page of the New Hampshire Sunday News. Thank you for the support @UnionLeader #FITN pic.twitter.com/0wu3lyyfJY

The @UnionLeader has made their choice. Have you? Join us today: https://t.co/wAYnuFR4Ku #FITN #Christie2016 pic.twitter.com/amLUI0uXIH

"[Christie] is the one candidate who has the range & type of experience the nation desperately needs. " @UnionLeader https://t.co/ZhT8W4OFiE

We’ll see if this moves any poll numbers.

well, he is *big* but Jersey’s about the size of some counties here in #Failifornia, not to mention Texas…

plus he’s anti-gun and an Obola suck-up.

NJ is EASILY considered a big state. It’s number 11 or 12 in terms of population.

And, in terms of guns… he’s probably vetoed more anti gun legislation than the rest of the field combined.

At least accuse him of transgressions that stand up to a 30 second google perusal.

It’s an undeniable fact that he is anti-gun, that he does not believe arming oneself is a fundamental human right just like speaking ones mind or practising ones religion. Just for one example, he refused to pardon that woman from PA who didn’t realise her carry permit wasn’t good in NJ. She did absolutely nothing wrong, and yet he was prepared to let her suffer in prison. Shame on him.

Not only did he pardon her, but he pardoned a further 3 people that ran afoul of NJ’s gun laws.

Your statement is demonstrably false.

I don’t even like the guy, but you’re simply wrong and I am forced to defend him.

She was arrested in October 2013; he pardoned her in April 2015, when it became an issue in his campaign. He let her suffer for nearly a year and a half. If he believed that being armed is a fundamental human right he would have pardoned her the day he found out about her case. It would have been a no-brainer. And he’d automatically pardon all such cases as soon as he found out about them.

So you admit you were blatantly incorrect, then.

Joisy is a backwater 5hithole. that a lot of people are stupid enough to live there still doesn’t make is anything else.

hell, lots of people choose to live in New Yak 5hitty, and it’s a hellhole too.

it just means there’s a whole bunch of dumb asses in that part of the country, which explains them electing the fascists they do, year after year.

Wait…what? Christie is still in the race?

No. The days when the Union Leader had that kind of influence are gone.

The donut-scented man-whore which is Chris Christie isn’t going to happen. Stop trying to make him happen.

Please and thank you.

I live in NH and my sense is that it won’t even get him many points locally, let along nationally. Even in NH, Republicans and Libertarians are being to note the stench of the GOPe.

I think Chris would be a great attorney general.

Actually, while I would prefer Cruz for President, he would also make an amazing AG. Of course, that would imply a President that would appoint him – which leaves only one, or perhaps two, possibilities.

Coming in third in New Hampshire wouldn’t rescue Chris Cristie. He has to do well in other states.

Gov. Christie can work across the aisle, but he won’t get rolled by the bureaucrats.

Assuming, I guess, that he learned something from the blocking of the lanes of the George Washington Bridge. I don’t think he’s still gotten down to the bottom of that.

Christie is, at this point, a vanity candidate of the GOPe, and a placeholder in order to try to diffuse the field to a JEB! Presidency. It’s not going to happen, and the GOPe has started to figure it out. Some of the smarter GOPe operatives have started to back Rubio with the intent of stopping a Cruz Presidency from becoming a possibility, which would be the END of the GOPe.

Nobody on the Right has forgotten “the Christie Hug” that Obama got post “Sandy” devastation. While personable, it was poor timing which took the know Obama aloofness and made him personable, creating a differential between Romney (who the press made seem downright cold) and Obama who actually IS aloof and detached.

Has he ever broken into the double digits on any of these polls? Has anybody who has consistently polled this low ever won the nomination and then the presidency? It’s extremely doubtful in my eyes that he’s going to get the nomination at this point. I think I’ll agree that being made Attorney General would be a far better position for him, maybe that’s why he’s sticking it out despite his consistently low poll numbers.

There was absolutely zero chance that Christie was EVER going to be President. Anybody that thought otherwise was just a fool.

He’s an unbelievable RINO that severely pissed off conservatives in the party when he publicly embraced Obama for doing nothing after the Hurricane in 2012.

He’s like Jeb! – somebody that is not only not a conservative, but actively DISLIKES conservatives in the party.

He should just put a D next to his name and be done with it.

“Embraced?” He blew the guy. That wasn’t doughnut glaze on his face when he came up for air. He needs to STFU and go away.

Oh, Christie is still in the race?