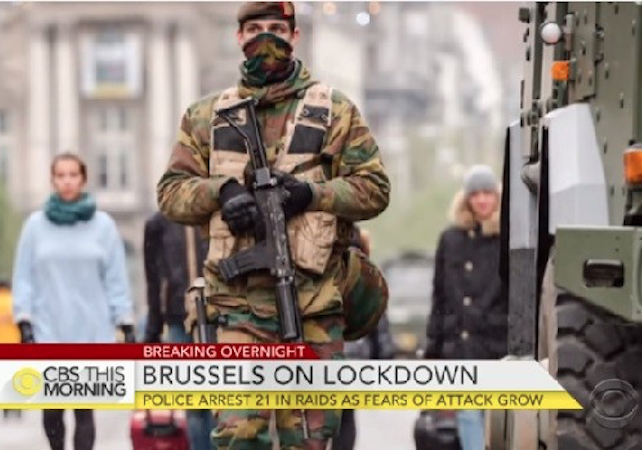 Brussels, the capital of Belgium and the seat of EU Parliament, rightly calls itself the ‘Heart of Europe’ – today that heart has almost come to a standstill. The city entered the fourth day of high terror alert, as security forces enforced a lockdown while carrying out massive raids on suspected terrorists hideouts. Belgian police have arrested 21 people during the current operation, but the mastermind of recent Paris attacks, Belgian-born Salah Abdeslam, is still at large.

“We fear an attack like in Paris, with several individuals, perhaps in several places,” Belgium’s Prime Minister Charles Michel told the reporters. Michel described the present threat posed by Islamists to his country as “serious and imminent.” London-based newspaper The Guardian reports:

Brussels will keep unprecedented security measures in place for at least another week as it faces an imminent and serious threat of a major terrorist attack, Belgium’s prime minister, Charles Michel, has said.

Anxious inhabitants of the Belgian capital had hoped for a respite from the lockdown that has seen shops, schools and offices shut, public transport restricted, museums and theatres closed, seasonal markets cancelled, and thousands of armed police and soldiers in the streets.

Some measures – such as the closure of schools and the metro – may be lifted on Wednesday, Michel told a press conference on Monday evening. Others will remain, however, and the military deployment will be reinforced.

Belgian security services continue to hunt for Salah Abdeslam, a 26-year-old from Brussels who is suspected of having fled to his home city after playing a role in the attacks that left 130 people dead in Paris 10 days ago. [The Guardian, UK]

This is undoubtedly the biggest security operation launched on the Belgium since World War II.

There have been media reports claiming that fugitive Salah Abdelslam has evaded Belgian police and crossed over to Germany, but both German and Belgian authorities have yet to confirm the reports. On November 13, Abdeslam managed to slip back to Brussels after carrying out the attacks in Paris that took 130 lives — instead of following in his elder brother Brahim’s footsteps. (He blew himself up in a cafe during those same attacks.)

After the Paris attacks, Brussel’s Molenbeek district has become the centre of anti-terror investigation. The suburban district has up to a 40 percent Muslim migrant population and has been referred to by media as a “no-go-zone” for Belgian police.

For two long decades (1992-2012) Molenbeek suburb was governed by the Socialist Mayor Phillipe Moureaux. Mayor Moureaux championed the policy of multiculturalism that celebrates “diversity” and slanders as intolerant bigots those who point out the lack of assimilation in the local communities. Brothers Brahim and Salah Abdeslam, masterminds of Paris attacks, are the children of this multicultural policy that failed to integrate them into the Belgian society.

In the aftermath of Paris attacks, as Europe — having learned nothing — doubles down on multiculturalism and open borders, Molenbeek suburb could well be the shape of Europe to come.

Isn’t this exactly what these fascists want? To shut down anything to do with Western Civilization? They are succeeding.

The rate of immigration cannot exceed the rate of assimilation and integration; otherwise, the immigration policies have a necessarily anti-native scope.

That said, good luck to the French and Russian coalition to mitigate the social justice-fostered refugee crisis and return a safe space to the people in Syria, Belgium, and elsewhere.

Salah Abdelslam is probably in Slovakia by now.

Europe is now the stage for a grand tragi-comic farce. Sundry countries have opened their doors over the course of decades to welcome millions of Mohammedans and their lovely supremacist, fascist ideology of “Submission,” with its inherent incompatibility with secular, pluralistic, democratic values and subversive and militant tenor, and, now, Paris and Brussels have been turned into armed camps, with citizens and tourists alike living in constant fear. Oh well; Europe used to be a fun place to visit; I guess I’ll have to travel somewhere else, to a country that is relatively free from Mohammedan presence and influence.