The Dangers of Petty Crime in the Internet Age 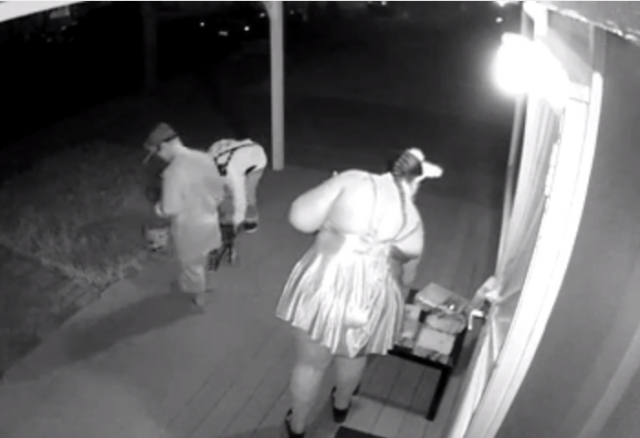 One chocolate enthusiast is waking up from her sugar coma to discover she is the country’s latest social media villain.

This Halloween, a San Diego resident and his friends set-up an experiment involving candy and a hidden camera.

On Halloween night, Nathan Brown and his roommates made an impromptu “social experiment” at their house in Serra Mesa.  They set up a table with three boxes of full-size candy bars for trick-or-treaters to come and take. They also wrote a note to the trick-or-treaters, “Help yourself, but please be considerate.”

“We thought we`ll leave some candy out…of course people are going to help themselves to a lot, but it’ll be fun to see who takes what,” Brown said.

Brown and his roommates left home for about an hour.  They returned to empty boxes. So, they checked the security video to see which kids took the most.

“We saw each kid behaving, taking a few…that was cool…that was fine,” Brown said. Everything was “fine” until they spotted a woman in the rabbit ears, he said.

The rabbit-eared thief, along with a masked child who was with her, cleaned out the entire stash of about 50 full-sized treats!

Brown was furious at the theft, as the woman’s greed meant that neighborhood children were going to miss out on some awesome Halloween chocolate. Acting as someone knowledgeable in the ways of new media, he uploaded the video to Youtube:

The video now has over 2 million views and over two thousand comments. Here are some of the choice remarks, which clearly indicate how tired people are of excuses that make victims of perpetrators:

Brown is still processing the unexpected results of his experiment.

“You’d think they would appreciate someone putting out a full candy bar, that, you know, maybe we should save some for the kids, but no, that’s not how it works,” Brown told Fox 5. “Apparently there’s one bad apple that has to ruin it for everyone.”

He said he was saddened that she appeared to be encouraging the child with her to take more.

“That’s what really bummed me out about the whole situation,” he said. “It’s a bad example for the kids.”

In the San Diego area, an all-points social media bulletin went out for the candy thief. She has been identified as El Cajon resident Trish Farrell. Initially, she didn’t appear to have any remorse and posted a message on her Facebook page saying “I love my haters…keep doing what you’re doing and imma keep doing me.”

Her Facebook page has subsequently been removed. Perhaps she has a few regrets now?

Clearly, this is a cautionary morality tale perfectly set in the Internet Age.

I predict many humorous bunny-inspired costumes will be donned next Halloween in the San Diego area.

I wonder if she voted for Obama?

So much wrong here.

But the rest of it — she should be named and shamed, in her community. That’s how a community maintains and enforces basic standards. Good.

But 2 million views and thousands of comments?

We’ve gone from “an armed society is a polite society” to handing everyone nuclear weapons.

I hope and expect that the next generation will figure out how to handle this effectively. But for us, this kind of dynamic is how we got an internet troll for a President.

Hmmm… let’s see. In California, they published lists of political donors names, boycotted a few, ran one out of a high-profile job. The names and addresses of people with gun registrations have been published, with interactive maps to make it even easier for nut cases to make their threats.

I got my car keyed when parked properly in a parking lot in Columbia, Maryland, probably for daring to comment about the local budget.

This is our world. In this world, getting your name published for public discourtesy seems fit. At least, she actually did something wrong.

No. She is not “stealing”. She is “helping herself” as directed by the sign. She is being inconsiderate.

Nathan Brown laid a trap for a person of poor character, and she fell into that trap. The public shaming is disproportionate to her crime. Does this make Nathan Brown feel good about himself, morally superior, perhaps.

The videographer wasn’t running a “social experiment”. The results could have been predicted.

A Democrat with a Democrat’s sense of entilement. Must have been Hillary in disguise.

How long before a lawsuit cometh by bunny ears in today’s litigious society?

Miss Piggy dressed up as a bunny for Halloween, now that’s funny.

C’mon. I’m sure she took those candy bars and gave them to poor transgender kids at the local shelter.

Has Justine landed yet?

I actually live in Serra Mesa (born and raised).. but I don’t know which part of the neighborhood this happened in. I’m also one of those grouches that turns off the light and doesn’t give out candy on Halloween.. mostly because if I buy any, I’ll eat it all.

That a parent did this while the kids were ok doesn’t surprise me much. I served on the safety patrol in grade school as a kid. The kids would always follow the rules, cross only in the crosswalk and when they were supposed to. The parents were the ones that were impatient and would cross whenever and wherever they wanted. Often the parents would drag their kids across with them with the kids usually trying to get them to stick to the rules.

I never understood people just putting candy out hoping that trick-or-treaters will follow the rules. Of course someone is going to take it all. If you want to control how much candy each trick-or-treater gets, grow a pair and hand it out yourself. Otherwise be prepared for something like this.