When it’s being covered on CNN by Ashleigh Banfield 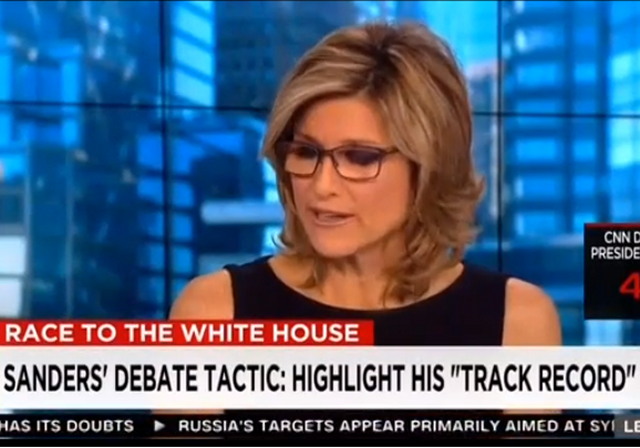 They considered the unthinkable possibility that Bernie Sanders will bring up Hillary’s email scandal, which Banfield quickly suggested isn’t really a scandal.

Matthew Balan of NewsBusters reports (emphasis is his):

CNN’s Banfield: Hillary E-Mail Scandal ‘Not Even A Scandal’

When Zimmerman claimed that “any Democrat who resorts to reciting Republican talking points is going to hurt themselves,” the anchor replied, “So…you don’t think he’s ever going to touch the e-mail scandal – or, it’s not even a scandal. It’s really a controversy. But ‘scandal’ is the Republicans’ word for it. So far, no one has determined there’s any scandal there.”

Do you believe Banfield would insist there’s no scandal if the presumed Republican nominee was being investigated by the FBI? Watch the video:

The House Select Committee on Benghazi will be making public next week new documents that demonstrate Sidney Blumenthal was seeking business in Libya as he was advising then Secretary of State Hillary Clinton on U.S. policy in the country. According to a letter from Chairman Trey Gowdy to Elijah Cummings, the ranking Democrat on the committee, at least once Clinton sought to aid Blumenthal’s business interests in Libya.

The 13-page letter also details new concerns about compromised security on Clinton’s email, noting that in one unsecured email Blumenthal appears to name a top CIA source in Libya –a revelation that could compromise the safety of that source if it became known publicly.

In a statement accompanying the letter, Gowdy makes some of his strongest accusations to date about the Obama administration’s obstruction of the committee’s work.

“These messages should have been made public when the State Department released Secretary Clinton’s other self-selected records on Libya and Benghazi, but there was a clear decision at the time to withhold this information from the American people and the Committee,” reads the letter. “The State Department has now made these messages available, and the Committee intends to question Secretary Clinton about them during her appearance.”

Nothing to see here, folks.

Always a revelation to see people that delusional.

We crossed over scandal, and are firmly in criminal country. And it Bernie Sanders doesn’t mention it, his reputation as a “honest socialist” is down the toilet.

There are no honest socialists. What there are is socialists who tell you what they want you to hear until they get in power. Then, the narrative changes.

Doubtful that all those stories were written by Republicans.

Sure they were. It’s a vast, right-wing conspiracy, dontcha know?

I don’t know about you, but my best yoga routines include blowing up North African countries to get sweet oil deals for my cronies.
9:18 PM – 8 Oct 2015

WTF? hillary is a scandal!

Great summary from another post by Stephen Hayes: Hillary-Email-for Dummies:

Clinton at first claimed she turned over all work-related emails to the State Department. False. (The committee later found emails between Clinton and both Sidney Blumenthal and David Petraeus that were not included by Clinton in her initial production.)

She claimed that she turned over her emails in response to a routine request the State Department made of former secretaries. False. (A State Department spokesman acknowledged the request for Clinton’s emails was triggered by the revelation that she had a private server.)

She claimed she never received a subpoena for the emails. False. (Gowdy produced one publicly to demonstrate that Clinton’s claim was untrue.)

She claimed she used only one email device as secretary of state. False. (Clinton herself has acknowledged using multiple devices, and FOIA requests make clear that she used at least an iPad and a BlackBerry.)

She claimed that she withheld her “personal” emails because of her private communications with her husband, among others. False. (A spokesman for Bill Clinton said the former president has sent just two emails in his life, both when he was president.)

She claimed that everything she did with respect to her email was allowed. False. (Clinton’s email setup indisputably violated the record retention requirements of the Obama administration, and the chief transparency officer at the State Department said the arrangement was “not acceptable.”)

She claimed Blumenthal’s emails to her were “unsolicited.” False. (Clinton repeatedly solicited more information from Blumenthal in their email exchanges.)

This empty talking head is still employed? Way back when she was on Court TV, I as a lawyer could not believe how vacuous her questions and commentary were. Guess the hipster glasses (an early adopter, she, of the hipster glasses look) were meant to impart gravitas. What a joke.

Oh, is that it? No wonder I missed it. I was wondering what possible excuse there could be for those frames.

RICO is a federal crime.

This woman begs the same question re Obama: traitor, moron, or both?