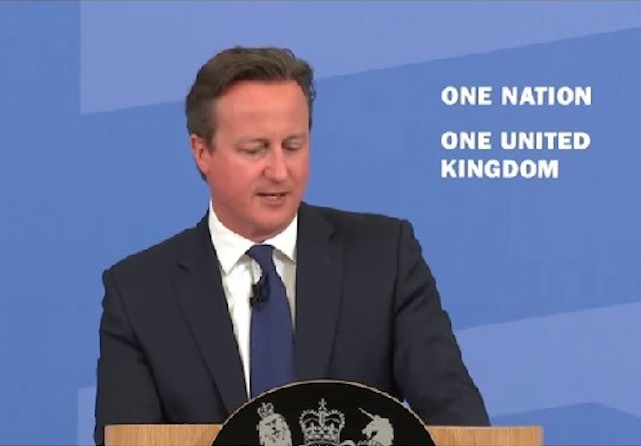 British Prime Minister David Cameron has announced new measures to tackle the rise of Islamic extremism in the UK. With this new set of measures, the government wants to counter the influence of Islamic thinking on government-funded institutions, private charities and businesses. Britain is home to about 3 million Muslims, and many Brits have become concerned about the radicalisation of young Muslims taking place in schools and mosques.

Today, some 500 to 1000 British Muslims are fighting in the ranks of the Islamic State (ISIS) in Syria. Additionally, Britain faces the threat of home-grown Islamic terrorism, as highlighted by the London bombings of 2005 that killed more than 50 people in the London public transport system during the rush hour. According to the domestic security service MI5, the home-grown terror plots are now at an all-time high.

British broadcaster Channel 4 News quoted Prime Minister Cameron as describing Islamic extremism as “one of the great struggles of our generation.”

The government has unveiled its new counter-extremism strategy, and announced a raft of new measures designed to stop radicalisation. (…) The government points to police figures that show 338 counter-terrorism related arrests over the past year, 157 linked to Syria and 56 relating to suspects aged under 20, which is “a growing trend”.
(…)
The Home Office will create “a new network, linking individuals and groups around Britain who are already standing up to extremists in their communities”, with £5m available for new groups.

Guidelines will be tightened so people who have supported extremist views can be denied or stripped of their British citizenship.

Prime Minister Cameron’s announcement was met with sharp criticism from Muslim and left-wing organisations in the country. Britain’s largest Muslim organisation, Muslim Council of Britain, accused Prime Minister of ‘McCarthyism’ and denied that there was any radicalisation in U.K. mosques, challenging the government position by asking, “Do such mosques [that preach extremism] really exist?” UK-based newspaper The Independent writes:

The Prime Minister unveiled further measures to protect children and youngsters from being radicalised in a speech on Monday, including plans to close down mosques where extremist meetings have taken place.

However, the Muslim Council of Britain challenged Mr Cameron, asking: “Do such mosques really exist?”

Instead of tackling the problem of radicalisation within their own community, the Muslim leadership in Britain have once again opted to attack the messenger.

Unlike President Obama, who thinks “Climate Change” is the only serious challenge worth his time, who constantly downplays the threat of radical Islam, and who stubbornly refuses to acknowledge the Islamic ideology driving the Islamic State, Al Qaeda or Hamas, Prime Minister Cameron has repeatedly found the right words to address the issue of rising radicalisation of Muslims in the West.

Prime Minister Cameron has described the battle with Radical Islam as the “struggle of our generation,” urging the Muslim “silent majority” to finally rise up and tackle fanaticism within their midst.

However, the chances of success for the Prime Minister’s new strategy remain low, unless both Muslim leaders and the community in the U.K. acknowledge the problem — and stand up to fight it. Until that happens, all government sponsored counter-extremism measures, “community outreach,” and “inter-faith dialogues” will remain futile.

Could this signal that the Brits have a budding sense of self-preservation?

We can but hope.

Funny that the Muslims are using the “McCarthy” smear. McCarthy…for all his various flaws…was more right than wrong, and Americans of the time knew that.

McCarthy…for all his various flaws…was more right than wrong, and Americans of the time knew that.

Not all Americans. Through the 50s and 60s, calling ‘McCarthy’ was a very successful code word for leftists, triggering a revulsion reaction by much of the public against the individual subject to the smear.

And in the UK, it’s being applied against Cameron, and conservatives, in the same way with much the same result.

Cameron would be well advised to address this head-on, and serve back a capsule response showing how right McCarthy was. If quibbles arise, that’s the time to point out the Soviet confirmations in the record.

This “anti-radicalism” legislation should worry us all, and has the potential to be quite “McCarthyist” in the bad sense, unless it specifies in writing that it’s directed only against radical Islam, and says why radical Islam is a problem in a way that “radicalism” in general is not. Otherwise it can and will be used against “radical” Jews, Christians, Hindus, and Sikhs, and against English nationalists, etc. If not by this government (and I wouldn’t put money on that!) then certainly by the next one. Certainly Moslems will take delight in laying such charges against anyone who can be seen in some light as a “radical”, and the apolitical (which means moderate leftist) authorities will treat these charges with exactly the same seriousness that they apply to charges against jihadists. So it needs to be written in the first place in a way that limits it to Moslem jihadism.

Britain better start fighting for it’s survival. Or a civil war may ensue. There is “accepted” Sharia law already there. Good luck Cameron.

“the chances of success for the Prime Minister’s new strategy remain low”
Yes, because that strategy is too weak and disregards the fact that the invaders intend to fight. The invasions in the UK, in Europe, and in the US will be stopped only by violence.

My Moderate Mantra: If a “moderate” Islamist is better than a pious Islamist then an Apostate must be even better. Demand zero dollars for Islamists of any stripe.

When I saw the headline I half expected it to be a crackdown on the UKIP and BNP people, not the invaders.

Pish tosh on this move of Cameron’s. It’s absurd and still dodging the issue. The Muslims are right: there is no radicalization going on in the mosques. There is no radical preaching going on in the mosques. What’s being said and taught in the mosques is pure Islam. What we call “radical Islam” is nothing more than Islam itself. When the “radicals” call for heads to fall, women to be stoned, infidels to be killed, they are not being radical. They are preaching Islam.

Cameron needs to stop putting water in his mouth to talk and call the enemy by name.

“Prime Minister Cameron has repeatedly found the right words to address the issue of rising radicalisation of Muslims in the West” — except when he insists that the evil deeds done by Muslims in the name of Islam have nothing whatsoever to do with Islam but are really anti-Islamic.

Unless one recognizes that the problem arises from orthodox Islam and the kind of culture it breeds, there can be no effective defense.

The problem with Cameron is (a) he’s not taking any real action like reducing Muslim immigration into the UK, and (b) he believes the lie that the “silent majority” objects to the terror, when it is far more likely they are silent because they agree with it, as all good Muslims should.