Ted Cruz vs. The Sierra Club

Ted Cruz vs. The Sierra Club

Spoiler: The Sierra Club does not win 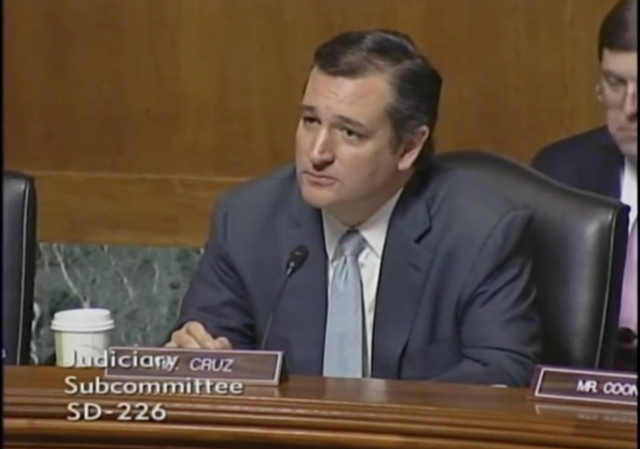 Tuesday, Senator Cruz chaired a hearing of the Senate Judiciary Subcommittee on Oversight, Agency Action, Federal Rights and Federal Courts titled “Opportunity Denied: How Overregulation Harms Minorities” that investigated the harmful effects of government overregulation on people and businesses who lack the resources and political connections to deal effectively with mountains of red tape.

According to his office, Cruz invited Harry Alford, president and CEO, National Black Chamber of Commerce; Michael Barrera, national economic prosperity manager, The LIBRE Institute; Sabina Loving, owner and operator, Loving Tax Services, Inc.; and Timothy Sandefur, principal attorney, Pacific Legal Foundation. Their testimony focused on the harmful effects of government overregulation on the African-American and Hispanic communities and on the experience of small businesses within these communities.

“Fifty-five years ago, there were 13 regulatory federal government agencies. Today, there are over 70,” said Senator Cruz.

This is where Cruz shines his brightest.

“Sir, the test is in the pudding,” said Mair. “I’m asking about the pudding today though, not the future pudding,” responded Senator Cruz.

Needless to say, not one testifying party could come up with one.single.example. Plenty of Washington speak, but no proof that overregulation is detrimental. Which is pretty impressive given the EPA’s trail of job destruction and energy cost increases.

“The regulation epidemic in this country certainly hasn’t translated into more jobs for minorities. Especially since President Obama has taken office. The median household income for African-Americans and Hispanics, for instance, has remained virtually unchanged since President Obama was elected. Meaning that there has been no recovery since the 2008 crash. And poverty rates for African-Americans has gone up. African-American unemployment remains almost double that of non-minorities, as it has for over 50 years.

It’s estimated that for every additional $1 million that the government spends enforcing its regulations, the economy loses 420 private sector jobs.

Of course, it doesn’t have to be this way. Curbing excessive government regulation shouldn’t be a partisan issue.

According to William Scott, CEO of Tristatz (we don’t know what that is either) and Democratic witness in the hearing, we should be thankful for government regulation which has, after all, saved us from… contaminated wood?

Ho-lee crap. Let’s just pause for a second here and understand the liberal mindset. Let’s look at the three things this guy says that we would not have, if it weren’t for government regulation.

First, he says that without regulation, seeds that are planted in the ground would not grow plants that provide nourishment. I’m being charitable with his rambling, nonsensical answer, and that’s the best possible interpretation of what this guy – who was brought out to be someone with something of value to Democrats to say – said about seeds. Get it? This guy thinks that if you buy some asparagus seeds, and plant them in the ground, the asparagus does not grow up to contain Vitamins A, C, E and K (or folic acid or fiber) unless there’s a government regulation that says that it must. Unless the FDA commands farmers to grow asparagus with these nutrients, it apparently just grows up all worthless and nutrient free and our bodies would all shrivel and die.

Second, he said… he said the wood in the Senate office buildings might be “contaminated” without government regulations. The wood, he said. Might be contaminated. If not for the government regulating – I guess, trees? – we might all just be surrounded by poisonous wood. Poisonous wood everywhere, and every time we touched it, we might all die. I want to emphasize that this guy, this William C. Scott, said this under oath in front of Congress, cognizant of the fact that there were cameras there recording the things that came out of his mouth. And he found it to be an eminently reasonable thing to say, that without government regulation, the wood in the Senate office buildings might (apparently) kill us all. From being “contaminated.”

Of course, no diatribe about the benefits of government regulation for minorities would be complete without reference to the Great Cheap Carpet Menace. I mean, without regulation, the carpet in the freaking United States Senate Chambers might be cheap. Definitely the Federal Government could not afford, anywhere in their trillion-plus dollar budget, to actually just buy good carpet from carpet salesmen with good reputations for a building that stands as one of the very symbols of our nation’s prosperity and good will. And definitely if the carpet just came up as soon as it was installed, there’s no way the government could sue the people who installed it for their shoddy workmanship or use their purchasing power to force them to come back in and re-install it. No way. What’s needed is government regulation here. To make sure, apparently, that even if you buy cheap carpet, it’s not cheap.

Shorter liberal sentiment: There exists not one single, solitary, instance of harmful government regulation, but if it weren’t for government, we’d have no plants.

And, I still support your support for Trump. Don’t let the Legal Insurrection resident bullies intimidate you, Carol.

They are pure unadulterated assholes & some of them are also liberal concern trolls as evidenced by their behavior.

If the GOP field can not defeat Trump in the primary, they are too weak to be president.

IMO, Trump would be a good president as would Cruz, regardless of what these LI assholes say or do.

You mean, like all of those people that were here before Donald Trump became a Republican?

LOL! I love when people stomp their feet and announce they’re leaving.

She really taught us all a lesson.

Who is she, anyway? Not who she apparently thinks she is, but who is she?

How odd to be called an ‘asshole’ by someone I don’t know and never heard of. What’s my move here… do I languish? Shall I find it difficult to sleep? Sip tea and pout on my back deck? Never had this happen.

Damn, you are a TOOL! You’re the perfect sucker for a bellowing charlatan such as Trump.

He was a deer in headlights as Cruz just kept pumping him full of rhetorical lead.

There is no…and I do mean NO…more debunked idea than the one that says “97% of scientists” say that AGW is a fact.

It’s anti-scientific in every possible way a statement CAN be!

It was 97% of only 77 scientists polled, 90% of them from the US. The poll did not even come close to use established polling protocols either.

I was wondering about the polling. Thanks for that info.

The 97% claim is a total sham, made worse in that it wasn’t merely a well-intended but poorly conducted poll – they purposely injected bias to achieve the predetermined outcome. Shoot arrow at barn wall, draw circle around arrow. Bull’s eye!

And the scientists who are doing their job predict that we’re actually going into a mini ice age like we had in the 70’s. They derive their information from the sun spots and not from the government giving them money.

Yeah, Cruz had some great pauses in there as well. Even better that they, the pauses, were caused entirely by Mair’s need for counsel about major issues he should know reflexively. Damn, he’s good.

You finally said something I can agree with. “Man-Made Global Warming” Is A $$$ Mongering Socialist Hoax.

Go here to read about how this “97%” number got started, and how completely bogus it is (like so much of the climate change “science”):

Ninety seven percent of those who rely on government grant money for their living agree that climate change is a problem. They also believe that with more grant money they can arrive at a government solution.

My dog depends on me for everything – food, shelter, medical care, companionship, etc. – and you know what? He agrees with everything I say.

Maybe the right regulations could have saved Monica Lewinsky from the wood in the Oval Office.

From the ‘wood’ in the Oval Office. LOL. I see whut you done there.

That’s the best comment I’ve ever read on LI.

Democrats are cruel for putting Mr. Scott in front of the committee. That was painful to watch.

I find it painful because I cannot believe these people are that stupid. The only other option is to realize that they have sold their souls. I hate to see somebody dismiss the warning:

“For what shall it profit a man, if he shall gain the whole world, and lose his own soul?”

Not every affirmative action product is this bad but this was the best that some dolt could find.

Without EPA regulation Guam will flip over. You anti-science types make me sick.

I remember that! Since Guam is still right side up, the regulations obviously worked.

BTW, did NASA find the flag the astronauts left on Mars when they found the missing ocean that was destroyed by the change in the missing climate? We should have regulated Mars.

You know the oceans on Mars have degraded to salty sludge flows. All due to our interference with the natural Martian cycles.

How many species have we wiped out of existence? How many civilizations have we destroyed with our callous colonial disregard?

Red, yellow, black, even white (although those don’t count) Martians destroyed. Proof of that is that you cannot find one atmosphere plant, canal, or city left on the entire planet.

People are missing a bigger point. No one’s voice was heard at this Senate hearing – except those like Mair and other idiots. These are the people chosen to speak at such hearings, that end up shaping policy and so forth.

What the **** are you talking about? What on earth made you think a stupid thing like that? Of course there were sensible witnesses called, who said sensible things. Even on this clip, there’s Tim Sandefur being sensible.

These morons are of the same ilk as Colorado’s 1st district congresscritter Diana DeGette who was pushing a magazine ban and opined that it would work because the magazines would be useless after they had been shot empty.
Also California State Sen. Kevin de Leon who stated that a ‘ghost gun’ had the ability with a .30-caliber clip to disperse with 30 bullets within half a second.

They’re past stupid. Past idiotic. They’re mental midgets with an IQ that, by demonstrated performance, has to be in the mid double digits.

All they are is useful clods who are nothing more than reliable rubber stamp puppets for their masters.

How they get elected is a testament to the current state of partisan politics in the nation, and it’s going to bite us all in the ass. Probably sooner that later.

Tristatz appears to be a “community organizing” company. I guess that explains why the representative doesn’t appear to actually speak English.