Will he or won’t he?

According to a new CNN/ORC poll, most Democrats who tuned in for the first Democratic primary debate thought Hillary Clinton won the night—but that “win” didn’t translate into boosted poll numbers.

Clinton has remained steady at 45%; Bernie Sanders is still in at a respectable 29%…and Joe Biden rounds out the top three with 18%—and he hasn’t even declared yet. Clinton hasn’t moved the needle much since before this month’s debate, but Sanders has managed to gain 5 points since mid-September—the only candidate to do so.

Overall, 31% of registered Democrats say they watched all or most of the CNN/Facebook debate, held October 13 in Las Vegas. More than 6-in-10 Democrats who watched say Clinton did the best job, almost doubling the 35% who thought Sanders had the best performance. On the other side of the coin, 43% of those who watched said Chafee had the worst night, 31% thought Webb did, 12% O’Malley.

Among those Democrats who watched the debate, both Sanders and Biden are viewed more favorably than they are among Democratic voters generally: Sanders’ favorability number bumps from 62% among all Democratic voters to 84% among debate viewers, while Biden climbs from 76% to 89% favorable. Clinton’s numbers are about the same in both groups.

Even without a bump, Clinton remains on top—at least in the CNN poll. But, not so fast! In New Hampshire, Bernie Sanders is on top:

Sanders holds a 38-30 percent lead over Clinton in the first-in-the-nation primary state, while Biden draws 19 percent in the poll of 403 likely Democratic primary voters conducted immediately after last week’s debate.

Sanders’ 8-point lead is essentially unchanged from the 44-37 percent advantage the Vermont senator held in a stunning Franklin Pierce-Herald poll in August — the first to show the former Secretary of State behind in New Hampshire.

The new poll also has Sanders holding an even bigger 10-point lead over Clinton if Biden isn’t in the presidential field.

The results suggest Clinton will have a tough time overcoming the deficit, as more than half of notoriously finicky Granite State voters now say they have made up their minds.

Seven in ten Sanders supporters say they’ve made a “firm choice” to vote for him, a 26 percent increase from the last Franklin Pierce-Herald poll in August. And 62 percent of Clinton backers now report they’re firmly in her column, compared to just 40 percent in August.

Clinton and Sanders are getting the majority of headlines, but it looks (at least in New Hampshire) as though Biden is both a wild card and catalyst. Still, he’s pushing back against pressure from both supporters and potential opponents to declare his candidacy, or get out of the way.

One final tidbit from the CNN poll: even though Democratic debate-watchers view Biden favorably, they don’t necessarily want Biden to jump in:

Despite their positive feelings toward Biden, debate-watchers are more apt than others to say Biden should stay out of the contest (61% think he should not run, compared with 43% of those who did not watch) and they are far more likely to be satisfied with the Democratic field generally (84% compared with 64% among those who didn’t watch). 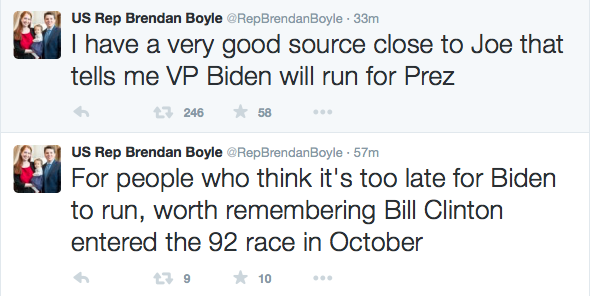 If Hillary wore the same pant suit as Kim Jong Un at the next debate the proletariat would go wild with applause!

LOL. You ain’t right, girl, but you’ve won the internet for today.

Something about that Hillary picture above…

Biden to lead Democrat War on Women to deprive woman candidate of her Right to be President!

Biden can afford to wait. He’s a veteran of prior national campaigns, he has high name recognition and presumably he’ll have Obama’s support. Thus he should have little problem getting on all the primary ballots or arranging for caucus turnout efforts in any state. It is the outsiders who need to start early and burn through money to identify supporters and get on the ballot.

Even then, Bill Clinton, not well known in 1991 if not exactly an outsider, did not announce till October.

In 1991 there also wasn’t any competition between several 24.7 cable news/opinion channels and and the commercial use of then internet was in its infancy. The news media has been responsible for pushing the campaign season to ever earlier dates to meet programming demands.

Another factor was until the economy started to slow, Bush 41 looked unbeatable. Bill was young back then. If Bush didn’t look beatable, he could afford to wait for the open race in 1996.

I hope Joe Biden enters the race. Talk about entertainment!

Well Biden has to do it very soon if he wants to make some primary filing deadlines. Arkansas and Arizona are November 9th.

My bet is that he enters the race. Can’t wait to see bumbling Joe on the campaign trail. “Stand up Chuck! God love you. What am I talking about?…..Everybody stand up for Chuck.”

Why is Biden even being polled? Perhaps Romney should be polled as well….or maybe Dukakis and Dole.