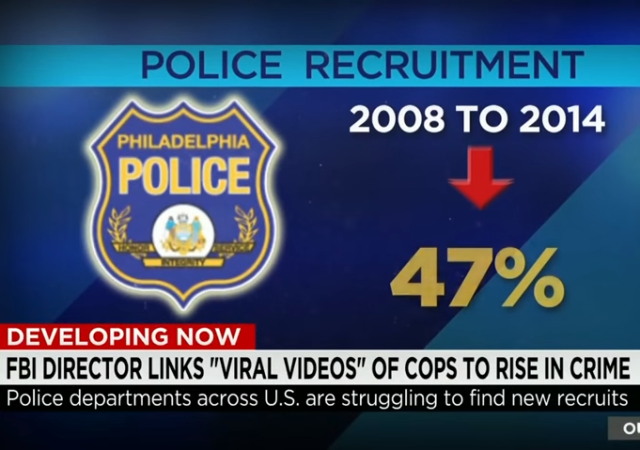 Across the nation, police departments are having difficulty recruiting new officers. Many people who might have considered a career in law enforcement just a few years ago are, naturally, concerned by the anti-cop rhetoric espoused by the Black Lives Matter movement and the accompanying narrative supplied by many in media.

The direct impact of officer-involved shootings on recruiting new officers is unclear, but police departments small and large are having fewer candidates apply to become officers.

Post-Ferguson, the New York Police Department, the country’s biggest police force, says applications are down 18%. LAPD saw a 16% drop in applications since 2013. In Philadelphia, where police have had a decadeslong problem of trying to attract new hires, police recruit numbers dropped 47% in 2014 from 2008. Even the small police force in Leesburg, Virginia, says while it hasn’t seen a drop in applications, far fewer qualified candidates are applying, affecting their ability to hire good cops.

Just so you know what a serious problem this is, here are a few recent and real examples:

Note that this is happening at a time when the leading Democrats running for president are talking about disarming the American people through greater gun control.

The totalitarians on the left are seeing success in their efforts to damage local police. The local cops and deputies are close to the people in those cities and counties. The left wants a national police force that they can control from D.C. Can you say “Stasi?”

I generally support the idea of reviewing sentencing and criminal law in general, because I think all statutory laws should be reviewed and corrected frequently.

But the idea behind the current sentencing review starts from a premise of Collectivst myth.

For some reason, the old saying “you reap what you sow” comes to mind.

The President has achieved his goal of demoralizing and demonizing the police!

A lawless administration who has undermined the Constitution and the rule of law.

Yet, you don’t see him bashing the FBI, BATFE, DEA, or any other federal law-enforcement agents. It’s only local-level LEOs — city police and county Sheriffs especially — he has a problem with.

Y’know, the ones who aren’t under his direct authority and control.

Obama Hates the police b/c of his thug mentality.

If…
If…
If we had all records of Obama, it would likely show interactions with law enforcement.

Probably. But we needn’t go that far back to find his disdain for police. His mentor and ghost writer is a terrorist whose only regret is that he did not kill more people. His Justice Department drops cases that are already won against violent voter intimidation.

He chooses to interfere both from the bully pulpit and using his EO powers to persecute legally acting officers. He’s a dangerous racist demagogue who has made it clear he is on the side of criminals.

Who would become an officer in this atmosphere?

And now that many of these communities have the policing they asked for they are discovering that maybe the police were right …. In any case I’ll wager that the deaths in minority communities due to the Ferguson affect will be orders of magnitude greater than the number of minorities shot in and killed by police in a year thuskeeping the liberal record of unintended consequences alive and well… As usual

Having worked in LE from 2004 to 2012, I can tell you that this is not a new problem. PDs regularly go wanting for qualified recruits, largely because so many potential recruits know that they won’t, or think they can’t, pass a background check (minor drug possession) or a polygraph exam (admit to minor, or long-past, drug use/possession), so they don’t even try. Others who attempt it actually aren’t accepted for various minor, usually drug-related, offenses as juveniles.

LE recruitment has cycles. Many things impact both the number and quality of police recruits. The quality of LE recruits went down following the attacks on this country in 2001. This was largely due to the fact that many good quality potential recruits went into the military and many reupped. This reduced the overall quality of LE candidates. Then we had the bursting of the housing value bubble, in 2008, As most local governments are heavily funded by property tax revenues, this caused a reduction in available LE positions. This was initially accomplished by removing unfilled, budgeted positions, then by removing filled positions when employees retired. So, at this point you have one of the lowest levels of local LE positions in the last 25 years. What is interesting is the fact that historically, when we have a weak economy, especially one in recession or depression, it i usually easier to fill LE positions, with quality recruits, because the private sector is depressed. That is not happening today. The combined assault upon LE, in this country, by both the radical liberal and conservative fringe in conjunction with the media, has resulted in an even further decline in the number of quality candidates.

Now, ultimately, what this accomplishes is to push law enforcement from a trained, professional class of people, to the largely untrained, unprofessional people of the general public. It forces people to provide for their own LE needs. And, this leads to totally random enforcement of laws and a general breakdown in civilized society. That, in turn, leads to a further decrease in economic opportunity which leads to a greater increase in criminal behavior, which leads to a greater vigilantism, which leads to … Well, you get the idea. When it gets bad enough, one of two things happens. Either the the system breaks down to one where armed groups dominate the countryside or totalitarianism rears its head. We know which is more likely, don’t we? In the 20th century, the rise of totalitarian regimes, in democratic countries, followed the same pattern that we see today.