McConnell to Rand: Hey, How About Focusing on Your Senate Race?

McConnell to Rand: Hey, How About Focusing on Your Senate Race? 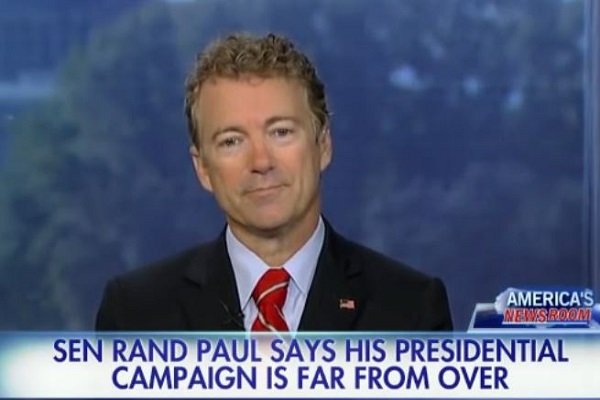 Rand Paul’s disappointing poll numbers and fundraising for his presidential campaign are reportedly a cause for concern among the GOP both in his home state of Kentucky and in Washington.

Last week, reports indicated that donors and the Kentucky GOP were urging Rand to focus on his senate reelection bid rather than on his flailing presidential campaign.

A defiant Rand Paul is brushing off weak fundraising and weaker poll numbers as would-be donors and home state Republicans push him to abandon an uphill presidential bid to focus on his Senate re-election.

. . . . But back in Kentucky, a growing chorus of Republicans suggested that Paul’s Senate re-election was by no means guaranteed, despite the state’s strong GOP leanings and the lack of a clear Democratic challenger.

“He could lose both positions,” said Patricia Vincent, chairwoman of the Graves County Republican Party. “He just needs to work a little bit more to make sure he still has a seat in the Senate.”

While Paul’s national numbers hover in the low single digits, he continues to divert resources from his Senate campaign to his presidential bid.

Politico reported yesterday that Mitch McConnell has now joined this chorus of Republicans urging Rand to focus on retaining his senate seat.

Senate Majority Leader Mitch McConnell and his allies are quietly ratcheting up pressure on Rand Paul to pay more attention to his Senate reelection next year — and less to his flagging 2016 presidential candidacy.

So far, those efforts have stopped short of urging the Kentucky senator, whose presidential bid McConnell has formally endorsed, to outright abandon his national campaign. But there are growing concerns that Paul, as a senator still in his first term in office, is courting trouble by dividing his time between the two races, raising the prospect that a rock-ribbed Republican seat could be put into play and jeopardize McConnell’s fragile 54-seat GOP majority.

As you may recall, McConnell was initially skeptical of Rand’s idea of setting up a presidential caucus to circumvent Kentucky law that the same candidate cannot appear twice on the same ballot but then agreed to support the move. Arguably, McConnell’s eleventh hour support influenced the Kentucky GOP to agree to the plan that allowed Rand to run for both his Senate seat and for president.

While it seems unlikely that the GOP would lose Rand’s Senate seat, it’s not impossible. Politico continues:

There is fresh urgency after Paul’s third-quarter Senate report, filed on Wednesday, showed he had raised a paltry $156,590 for his reelection in the last quarter, a small sum for a House candidate, let alone a nationally known Senate incumbent.

“His reelection to the Senate is not a forgone conclusion,” warned Ted Jackson, a veteran Republican political strategist in Kentucky.

According to Politico, Rand has denied that either the Kentucky GOP or McConnell are pressuring him to focus on his Senate race, claiming that he “is running for president” and that—for his Senate seat—he has “no opponent and . . . probably the highest poll numbers in the state.”

However, he is working to allay concerns . . . or rumors of concerns. Again from Politico:

Paul has upped his Washington fundraising for the Senate, held a briefing for Kentucky-tied politicos in Washington and promised to bulk up his Senate operation, announcing that respected strategist Chris LaCivita, widely credited with saving Kansas Sen. Pat Roberts’ floundering campaign last cycle, would work on Paul’s Senate race, in addition to the presidential campaign.

This statement is in keeping with his recent interview on Fox in which he asserts that his presidential campaign is “far from over.”  Watch:

Hey Mitch, why don’t you put some effort into getting a spine and being a man.

Why is that coward trying to tell anyone what to do? He’s the Senate Majority leader and doesn’t even have the balls to take a stand on anything.

Shut up Mitch and resign. You are worthless.

Worrying about a vulnerable senate seat is his job. If Paul is neglecting his senate campaign then McConnell is right to call him on it. The GOP desn’t need yet another presidential camdidate; it needs to keep that KY senate seat, and Paul’s first duty should be to make sure he is reelected.

McConnell’s worried about retaining the majority in the senate? What does the majority do the Republicans with McConnell at the helm?

If Mitch McConnell supports it then it must be good for the Democrats. I hadn’t before but now I’m thinking of sending some money to Rand For President.

McConnell should be concerned and those who dismiss his analysis of Kentucky politics come across to me as people who have let their anger get well ahead of whatever political knowledge and judgement they may possess.

Like many of the states that include part of Appalachia, Kentucky has a large percentage of Democrat voters who are socially conservative but who are populist in their economic outlook. In recent cycles they only vote Democrat in local elections. That’s because on the national level that brand of populism has been turned upside down by a Democrat party that collects Danegeld from big business oligarchs with the promise of strangling any budding competition with over regulation. But as recent as 2004 the national Democrat money machine was convinced to support socially conservative populist Democrats. In 2006 they road them to a majority in Congress.

It is comforting to think voters won’t be fooled again because they remember how the Democrat class of 2006 rubber stamped the Pelosi-Obama agenda. But is that true? Rand Paul’s libertarianism is not always a comfortable fit with Kentucky voters.

Hey McTurtle, how about jumping off the Tarpeian Rock.

Understandable concern from McConnell, who continues to have trouble getting reelected in his home state.